The father of the eight-year-old girl, who was allegedly gang-raped in Mandsaur district, on Sunday, demanded capital punishment for the accused, saying he does not want compensation from the government. 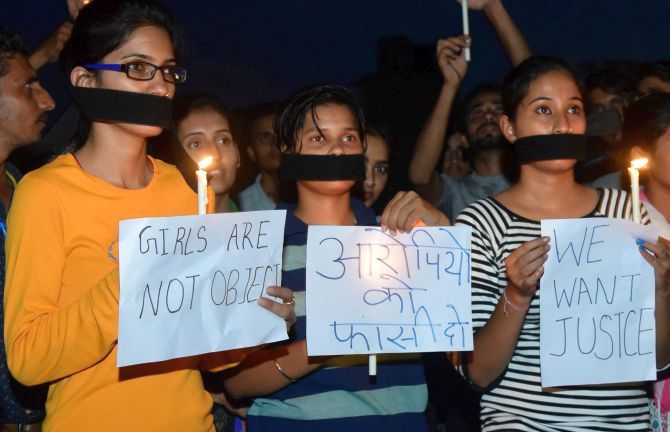 IMAGE: Youth take part in a candle march in protest against the rape of an eight-year-old girl in Mandsaur, at Bikaner. Photograph: PTI Photo

The victim, whose father is a flower vendor in Mandsaur, was raped on June 26 after having been abducted from outside her school by two men.

She had suffered grievous injuries to her neck, face, head and private parts and was admitted to the Maharaja Yeshwantrao hospital on June 27.

The girl’s father told reporters at the hospital that his family wants death sentence for the accused.

“Our family doesn’t want compensation from the government. We want the legal process in this case to be completed at the earliest and convicts be awarded death sentence as soon as possible,” the distraught man said.

Asked about the state government’s decision to extend a financial assistance worth Rs 10 lakh to his family, he said, “Money is not an issue. We only want justice.”

He also said he was satisfied with the treatment being provided to his daughter by doctors at MY Hospital.

“Doctors from outside are also coming to treat my daughter. She would get the right treatment here. Her condition is expected to improve further in the next couple of days,” he said.

The hospital’s superintendent had on Saturday said the victim’s wounds were healing and she was likely to be discharged from the hospital in about two weeks.

The team of doctors from the hospital were being advised by two private paediatricians to ensure the best possible treatment for the minor, as directed by Chief Minister Shivraj Singh Chouhan, he had said.

Meanwhile, Mandsaur District Collector O P Shrivastava said that Rs five lakh from the chief minister’s discretionary fund was transferred to the bank account of the victim’s father on Saturday to provide immediate financial assistance to the family.

Another instalment of Rs five lakh will be deposited on Monday, he said.

After discharge from the hospital, the girl would be provided counselling by a senior psychiatrist so that she can recover from the trauma and lead a normal life.

Earlier, the two accused -- Irfan alias Bhaiyu, 20, and Asif, 24 -- were arrested in connection with the case and booked under relevant sections of the IPC and the Protection of Children from Sexual Offences Act.