'We can no longer be silent about Pakistan's safe havens for terrorist organisations, the Taliban, and other groups that pose a threat to the region and beyond.'
'Islamabad receives billions in aid from the US but continues to harbour terrorists,' Trump said. 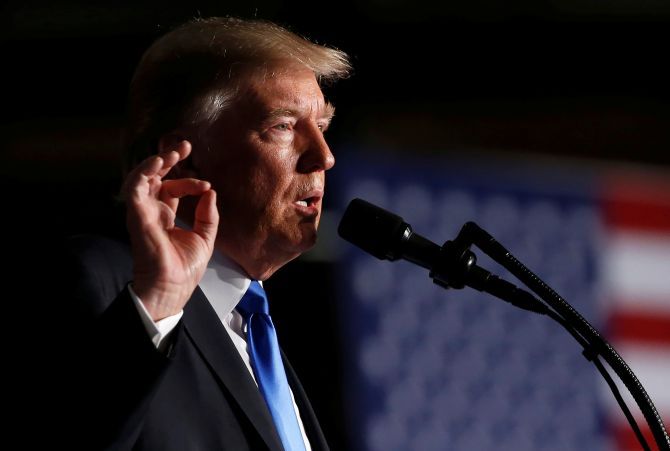 IMAGE: US President Donald Trump announces his strategy for the war in Afghanistan during an address from Fort Myer, Virginia, on Tuesday. Photographs: Joshua Roberts/Reuters

United States President Donald Trump on Tuesday ruled out a hasty withdrawal of troops from Afghanistan to end America's longest war, as he warned Pakistan of consequences for providing safe havens to terrorists and sought an enhanced role for India to bring peace in the war-torn country.

Trump, in his first prime-time televised address to the nation as commander-in-chief, laid out his South Asia policy saying a 'critical part' of it was to further develop US' strategic partnership with India.

He said after a 'comprehensive review', it was decided that the American strategy in Afghanistan and South Asia will change dramatically.

Trump said his instinct was to pull out of Afghanistan but following months of discussion, he concluded that 'the consequences of a rapid exit are both predictable and unacceptable' and would leave a vacuum that terrorists would instantly fill.

"A core pillar of our new strategy is a shift from a time-based approach to one based on conditions. I've said many times how counterproductive it is for the United States to announce in advance, the dates we intend to begin, or end, military operations," Trump said in his 26-minute speech.

"We will not talk about numbers of troops or our plans for further military activities," Trump said as he announced his South Asia policy in front of about 2,000 people from all five services and top officials of his administration.

Trump said he has arrived at three fundamental conclusions about America's core interests in Afghanistan.

"Our nation must seek an honourable and enduring outcome worthy of the tremendous sacrifices that have been made," Trump said.

"Second, the consequences of a rapid exit are both predictable and unacceptable...A hasty withdrawal would create a vacuum that terrorists -- including ISIS (Islamic State) and Al Qaeda –- would instantly fill, just as happened before September 11th (sic)," he said.

Trump's rejection of a rapid withdrawal from Afghanistan was being seen as backtracking from his promise to swiftly end America's 16-year-old war in Afghanistan.

Trump said the next pillar of his new strategy is a change in America's approach to Pakistan.

Trump slammed Pakistan for its continued support to terrorist groups and warned Islamabad of consequences if it continues to do so.

"We can no longer be silent about Pakistan's safe havens for terrorist organisations, the Taliban, and other groups that pose a threat to the region and beyond," Trump said.

"Pakistan has much to gain from partnering with our effort in Afghanistan. It has much to lose by continuing to harbour terrorists," he said, in an apparent warning to Pakistan. 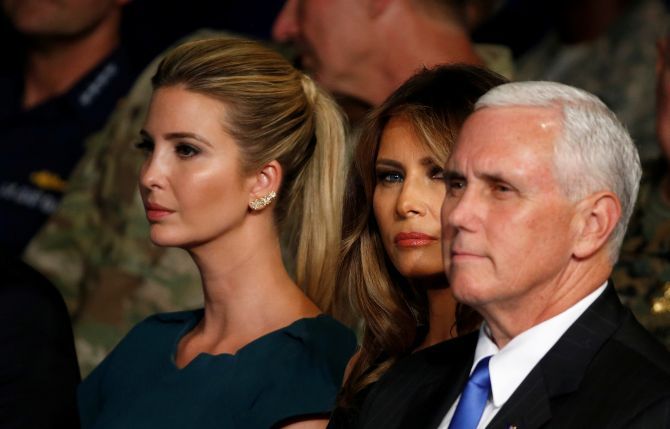 Trump also noted that the threat is worse because Pakistan and India are two nuclear-armed states whose tense relations threaten to spiral into a conflict.

The US President reached out to India seeking an enhanced role for New Delhi, especially in the economic field, to bring peace and stability in Afghanistan.

India, the world's largest democracy, is a key security and economic partner of the United States, he said.

"We appreciate India's important contributions to stability in Afghanistan, but India makes billions of dollars in trade with the United States, and we want them to help us more with Afghanistan, especially in the area of economic assistance and development," Trump said.

"We are committed to pursuing our shared objectives for peace and security in South Asia and the broader Indo-Pacific region," said the US President.

In his speech, Trump came down heavily on Pakistan for its support to terror groups, saying Islamabad receives billions in aid from the US but continues to harbour terrorists.

"In the past, Pakistan has been a valued partner. Our militaries have worked together against common enemies. The Pakistani people have suffered greatly from terrorism and extremism. We recognise those contributions and those sacrifices," Trump said.

"But Pakistan has also sheltered the same organisations that try every single day to kill our people," he added.

Trump noted that the US has been paying Pakistan billions and billions of dollars but it continues to house the very terrorists that America is fighting.

"But that will have to change. That will change immediately. No partnership can survive a country's harbouring of militants and terrorists who target US service members and officials. It is time for Pakistan to demonstrate its commitment to civilisation, order, and to peace," Trump said.

In a statement following Trump's address, Secretary of State Rex Tillerson echoed the president's views on enhanced role for India in the new South Asia strategy.

"India will be an important partner in the effort to ensure peace and stability in the region, and we welcome its role in supporting Afghanistan's political and economic modernisation," he said.

"Pakistan has suffered greatly from terrorism and can be an important partner in our shared goals of peace and stability in the region," he said.

"We look to Pakistan to take decisive action against militant groups based in Pakistan that are a threat to the region. It is vital to US interests that Afghanistan and Pakistan prevent terrorist sanctuaries," Tillerson said.

Top Trump administration officials were present as the US President delivered his address to the nation.

"In Afghanistan and Pakistan, America's interests are clear: we must stop the re-emergence of safe-havens that enable terrorists to threaten America; and we must prevent nuclear weapons and materials from coming into the hands of terrorists and being used against us," he said.

Trump said he has already lifted restrictions the previous administration placed on US' war-fighters that prevented the Secretary of Defence and its commanders in the field from fully and swiftly waging battle against the enemy.

"Micromanagement from Washington, DC does not win battles. They are won in the field drawing upon the judgement and expertise of war-time commanders and front line soldiers acting in real time -- with real authority -- and with a clear mission to defeat the enemy," he said.

"That's why we will also expand authority for American armed forces to target the terrorist and criminal networks that sow violence and chaos throughout Afghanistan.

"These killers need to know they have nowhere to hide -- that no place is beyond the reach of American arms...We will also maximise sanctions and other financial and law enforcement actions against these networks, to eliminate their ability to export terror," Trump said.

He asserted that American troops will fight to win.

"From now on, victory will have a clear definition: attacking our enemies, obliterating ISIS, crushing Al Qaeda, preventing the Taliban from taking over the country, and stopping mass terror attacks against Americans before they emerge," he said.

Trump noted that the stronger the Afghan security forces become, the less the US will have to do.

Afghans will secure and build their own nation, and define their own future and the US wants them to succeed, the US President said.

"But we will no longer use American military might to construct democracies in far away lands, or try to rebuild other countries in our own image -- those days are now over. Instead, we will work with allies and partners to protect our shared interests," Trump said.

"We are not asking others to change their way of life, but to pursue common goals that allow our children to live better lives. This principled realism will guide our decisions moving forward," Trump said.