The second debate was ugly with the Republican nominee going on the offensive with personal attacks, but Democratic rival accused him of diverting attention from lewd tape. 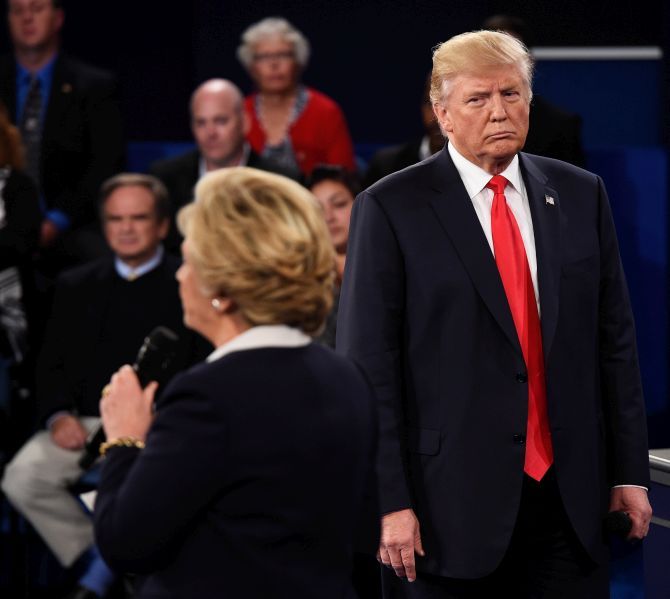 Facing a backlash over his lewd remarks against women, a defiant Donald Trump on Monday attacked Hillary Clinton’s husband over sexual assault allegations and vowed to jail his Democratic rival for “lying” over using a private e-mail server while secretary of state.

In the second presidential debate that turned nasty from the start, Clinton did not shake hands with the 70-year-old Republican nominee as the two rivals walked on the stage at the Washington University in St Louis -- a clear sign of the escalated rivalry between them -- before proceeding for the fiery 90-minute clash attacking each other’s character.

Polls conducted soon after the showdown, which was the most tweeted presidential debate ever, declared the Democrat as the winner though they did give Trump the credit for “exceeding expectations”.

The 68-year-old former secretary of state attacked Trump over his plans to ban Muslims entering the United States, saying it will be “short-sighted” and “dangerous” to engage in his “demagogic rhetoric” about the community as the two clashed on Obamacare, taxes and Islamaphobia in the second segment of the town-hall style debate.

When pressed on whether the ban is no longer his position, Trump called it an “extreme vetting from certain areas of the world”. 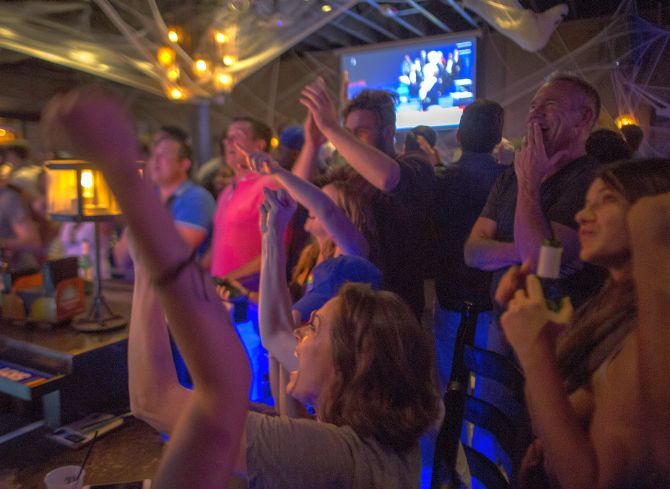 While Clinton alleged that the real estate tycoon’s 2005 video of lewd and sexually explicit remarks against women -- that jolted his White House campaign and prompted a top Republican leaders to abandon him -- reflects “the real” Trump, he accused her husband Bill Clinton of sexual assault of women over the past several decades.

Trump said he was “very embarrassed” with the video that surfaced on Friday and “hated” it but dismissed the recording as “locker room talk” in response to a question in the early phase of the debate that quickly turned into an acrimonious discussion over the clip in which he was heard using vulgar language and talking about groping women without consent.

Under pressure following the backlash over the video as well as his past performance at the first presidential debate on September 27 which media said was “agitated” and “ignorant”, Trump appeared defiant.

The billionaire also vowed, if elected as the US president, to launch a special investigation against Clinton over her use of a private e-mail server during her tenure as secretary of state under US President Barack Obama from 2009-2013 and ensure she is jailed.

“If I win, I’m going to instruct the attorney general to get a special prosecutor to look into your situation because there’s never been so many lies, so much deception,” Trump said.

Clinton hit back, saying “everything he just said is absolutely false, but I’m not surprised,” she said.

“It is just awfully good that someone with the temperament of Donald Trump is not in charge of the law in our country,” Clinton said.

“Because you’d be in jail,” Trump said in another interruption. 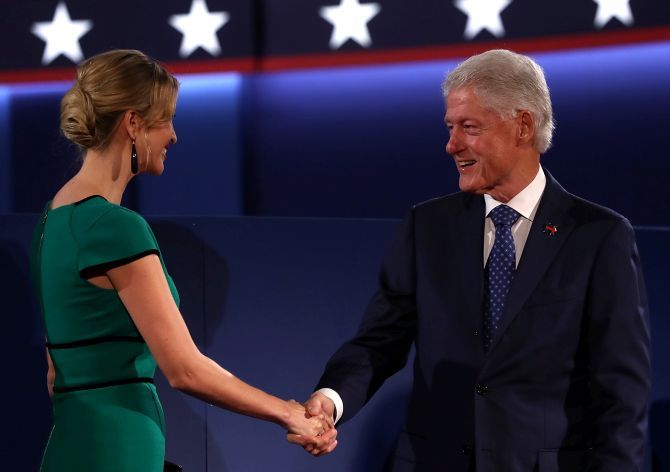 Faced with a make-or-break situation in his campaign, Trump convened a surprise meeting of women who have previously accused former US president Bill Clinton of sexual misconduct, just hours before the debate, the second of three planned debates before the November 8 election. The final showdown will be held on October 19 in Las Vegas.

During the debate moderated by CNN news anchor Anderson Cooper and ABC’s Martha Raddatz, a Muslim named Gorbah Hameed asked the two nominees on how they will help people like her deal with the consequences of being labelled as a threat to the country after the election is over.

When pressed on his controversial call for ban by moderator, Trump said the ban in “some form has morphed into an extreme vetting from certain areas of the world”.

Clinton shot back, saying: “We are not at war with Islam.” She said Trump’s “extremely unwise” and “even dangerous” comments about Muslims are used to recruit terrorists. 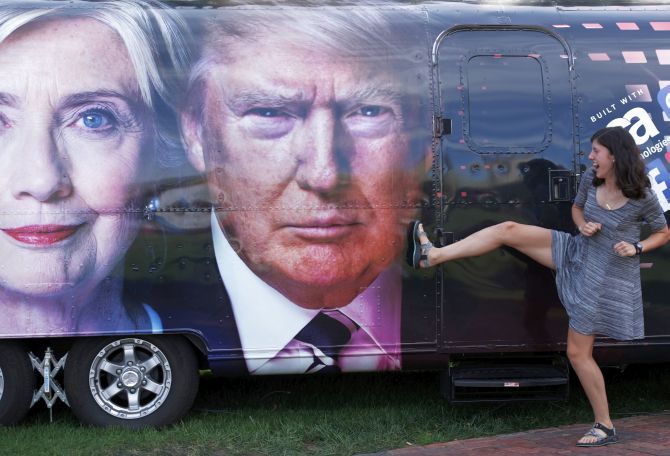 Trump denied actions he bragged about on tape. The former reality TV star refrained from giving a direct answer to the question if he actually kissed women or groped them without consent. “I have great respect for women.

“Have you ever done those things?” Cooper asked again.

“If you look at Bill Clinton, far worse. Mine are words, and his was action. His was what he’s done to women. There’s never been anybody in the history politics in this nation that’s been so abusive to women. So you can say any way you want to say it, but Bill Clinton was abusive to women,” Trump said, adding Hillary Clinton “attacked those same women and attacked them viciously”.

Clinton, meanwhile said “if this were just about one video, maybe what he’s saying tonight would be understandable, but everyone can draw their own conclusions at this point about whether or not the man in the video or the man on the stage respects women”.

“But he never apologises for anything to anyone,” she added.

Clinton also said that for the first time a foreign power is trying to influence the presidential election in all likelihood for Trump, whom she accused of being close to Russian President Vladimir Putin. 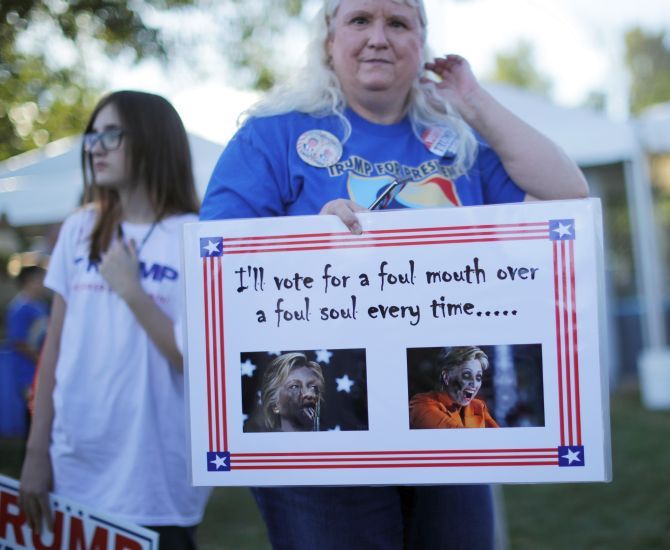 Before tens of millions of viewers and a live audience that included Bill Clinton, Clinton also demanded that Trump release his tax returns so that “people can see what are the entanglements and the financial relationships that he has with the Russians and other foreign powers”.

Calling the situation in Syria “catastrophic”, said Russia is not doing anything to contain Islamic State in the region, and pointed out that when she was the secretary of state, she advocated a no-fly zone and safe zone.

“I will tell you that number one I pay tremendous numbers of taxes. I absolutely use it, and so did Warren Buffett. And so did George Soros and so did many of the other people that Hillary is getting money from. Now I won’t mention their names because they’re rich, but they’re not famous. So we won’t make them famous,” he added.

Clinton -- whom Trump accused of having “hate in her heart” -- hit back, saying he has never apologised to anyone, and that he owes an apology to Obama and the country.

Obama’s former attorney general Eric Holder led the broad condemnation of Trump’s threat, as critics painted him as a dictator in the making.

“In the USA we do not threaten to jail political opponents. @realDonaldTrump said he would. He is promising to abuse the power of the office,” Holder tweeted.

Nobel Prize winning economist Paul Krugman said: “Let’s be clear: a candidate for president promised to put his opponent in jail if he wins. Everything else is secondary.

Trump was also called as undemocratic by a number of fellow Republicans.

Bush speechwriter David Frum said: “Who would consent to serve as attorney general to a president who believed he could direct prosecutions of his political opponents?” 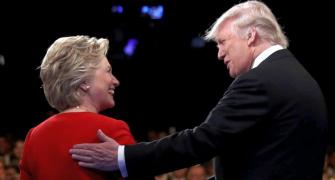 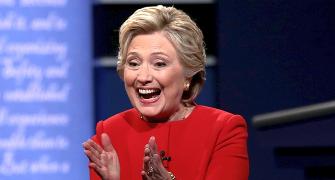 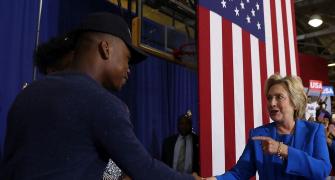 Why I may seem 'aloof' or 'unemotional': Hillary Clinton opens up 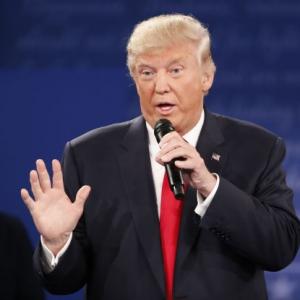 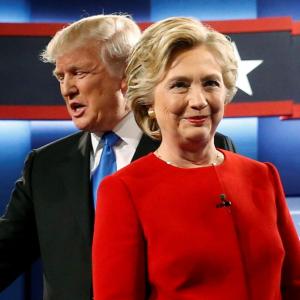