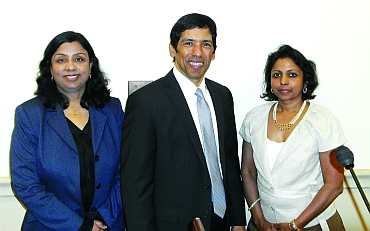 Senators and representatives from both sides of the aisle were on hand at a legislative conference on Capitol Hill and a reception hosted by the American Association of Physicians of Indian Origin where a range of issues from medicare to J-1 visas for physicians from India to practice in rural and underserved areas across the United States were discussed.

Keynoting the conference Dr William Rogers, acting director, Division of Strategic Partnerships, Centers for Medicare and Medicaid Services, traced the genesis of Medicare and his experiences as a practicing emergency medicine physician.

Stuart Anderson, an erstwhile senior Congressional staff member who handled immigration issues and now executive director, National Foundation for American Policy, discussed how without any Congressional action, a typical highly-skilled worker from India could face a wait time of up to 77 years for a green card.

There are several thousand physicians of Indian origin in the United States on J-1 and H-1 visas stuck in this backlog, and several audience members spoke up then, noting that they were still waiting for their green card after more than a decade.

Joining Anderson on the immigration reform panel was Akshay Ranganathan, representing the nonprofit community organisation Immigration Voice and its president Aman Kapoor, who has been a driving force on this issue.

Ranganathan explained that the house had overwhelmingly voted to pass modest reforms to the employer-based Green Card system, namely eliminating per-country limits, which would greatly ease the backlog.

However, Senator Chuck Grassley, Iowa Republican -- who for years was a beneficiary of Indian-American largesse to his campaign coffers -- had placed a hold on the bill in the Senate, preventing its consideration.

Warning that the bill would die unless passed this year, Ranganathan urged AAPI to get more energised and use its clout and influence.

Lofgren -- a long-time immigration advocate who serves on the House Judiciary Committee and is the ranking member of its Immigration subcommittee with jurisdiction on all immigration and naturalisation matters -- introduced the 'Doctors for Under-Served Areas in America Act' to make the Conrad 30 J-1 visa program permanent beyond its deadline of September 30, 2012, and to waive the foreign country residence requirement with respect to international medical graduates.

She said, "This is an enormously important thing for our country. Certainly, as our country ages, this program will become even more important."

Visiting physicians have been lifesavers for rural and inner cities, serving mostly indigent communities with no permanent doctors.

Pointing out that there are several other immigration visas set to expire, important to the community, including the R-1 religious worker visa, she said she was working to pass extensions for all expiring programs.

She urged AAPI to get more active on the J-1 visa legislation and hold the lawmakers to whom they had contributed handsomely accountable.

Lofgren later said, "This bill is about increasing access to health care for underserved Americans. We have a shortage of qualified medical professionals in this country, and this bill will help attract doctors who have received their medical training in the US to work in areas that desperately needs doctors."

Congressman Hansen Clarke, Michigan Democrat, said, 'I am actively working to support legislation such as the J-1 visa program, which has made a major impact on inner schools and communities in the Detroit area.'

Congressman Andy Harris, Maryland Republican and a physician by training, said more doctors needed to get elected to Congress to have an impact in the health care arena. He said there were more than 200 lawyers serving in Congress and less than 20 physicians.

Roe, bemoaning that this had resulted in some specialists in his field giving up their practice, said more should be done so people can buy insurance across state lines to make health care more affordable.

She later said, "If we don't do anything, the J-1 visa program will expire in a few months; we can't let that happen. As the most powerful, largest and most influential international medical organization in the country, we have to focus all our efforts and energies to making these things right and making sure that legislations like that of Congresswoman Lofgren's get enacted."

Among others who addressed the conference were Mitul Desai, community liaison at the State Department; Dr Adrienne Smith from the Department of Health and Human Services; Joel Anand Samy, senior advisor, The Heritage Foundation.

"The information and discussions we shared with Congressmen and representatives of the federal government enables us at AAPI to shape the course on health care policy. We really need to speak out on the issue of J-1 visas and also expanding the number of medical residencies -- and now there are bills in Congress pending that would do just that -- because these are vital issues important to physicians of Indian origin and would greatly impact the access to care all Americans will have in the future."

The conference was the fifth Capitol Hill event organised by Dino Teppara, president, DT Strategies, and former chief of staff and counsel to Congressman Joe Wilson. Among other things, he has also created the AAPI Capitol Hill fellowship program, which places second generation AAPI members in medical school in Congressional offices to assist with health care policy and gain legislative experience.

Most doctors who enter the US on a J1 visa to participate in a residency program are subject to the two year home residency requirement under the Immigration and Nationality Act Section 212(e).

This means that at the end of the J1 program, the doctor cannot change to a different non-immigrant status or apply for lawful permanent residence without returning to his or her home country for two years. However, a doctor may request a waiver of this requirement on several different grounds.

The Conrad 30 waiver or State 30 waiver is a State Department of Health waiver utilised by foreign medical graduate physicians.

In 1994, Senator Kent Conrad created the 'Conrad 20' to address the shortage of physicians in medically underserved areas. In 2003, this legislation was reauthorized, and increased the number of state-sponsored waivers to 30 per year.

Each state has specific requirements regarding whether a specialty will qualify for their Conrad J1 waiver program.

December 4, 2004, Congress enacted legislation that affords states the right to substitute five of their 30 slots with licensed and contracted specialty physicians.

Image: Participants at the American Association of Physicians of Indian Origin