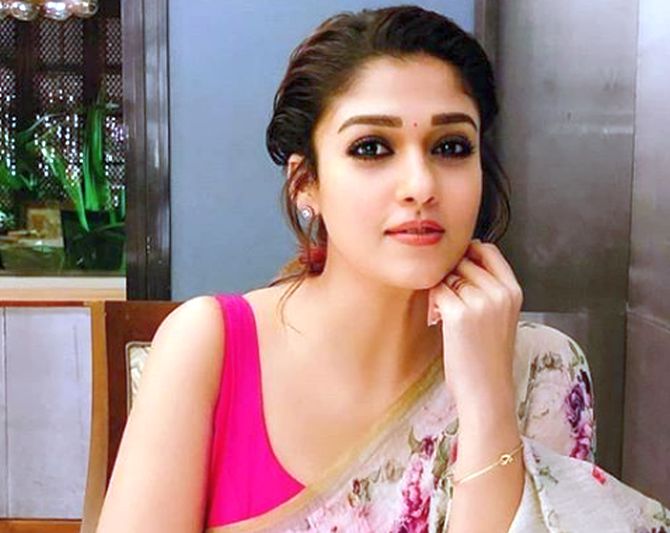 IMAGE: Nayanthara, a professional for nearly 15 years, said, "By demeaning the status of women and passing sexist remarks, these retarded men get a feeling of machismo". Photograph: Nayanathara/Instagram

Radharavi's remarks at an event had created a furore, with actors Kamal Haasan and Taapsee Pannu and director Vignesh Shivan hitting out at him. A video purportedly showing Radharavi making the remarks had gone viral.

While Radharavi expressed regret for his remarks, Nayanthara lashed out, alleging he was trying to hog limelight with such "cheap" comments.

In a press statement, which the actress herself acknowledged, Nayanthara thanked DMK president M K Stalin for suspending the actor from the party.

Haasan, founder of Makkal Needhi Maiam party, said it was the responsibility of the cinema industry to treat women professionals with respect.

The South Indian Artistes Association also condemned Radharavi's statement, saying this was not the first time he was making remarks with "double meaning" at a public event.

It virtually warned Radharavi of 'non-cooperation' in the future if he repeated such utterances.

Stalin said the DMK was a movement that protected women's rights and Radharavi's comments were not acceptable to it.

In a tweet, he uploaded party general secretary K Anbazhagan's statement that Radharavi was being 'suspended' for bringing disrepute to the DMK. The statement was carried in DMK mouthpiece 'Murasoli.'

"Radharavi is being suspended from all party posts, including the primary membership, for violating the party discipline and bringing disrepute to it," he said.

Stalin said such indiscipline from party men will not be tolerated.

"The remarks by Radharavi, who belongs to the DMK which protects women's rights, about women artistes is not acceptable. It is strongly condemnable," he said.

"Partymen should express opinions in a dignified manner and action will be taken against those violating it," Stalin warned.

Nayanthara, a professional for nearly 15 years, has a good fan following in the south, especially in Tamil Nadu.

In her response, she sought to remind Radharavi and the likes "they were also given birth by a woman" and thanked Stalin for his party's disciplinary action against the actor.
"First and foremost, it is my bounden duty to place on record my sincere thanks and deepest appreciation to the president of Dravida Munnetra Kazhagam, Thiru M K Stalin, for swiftly taking action against misogynistic speeches of Radharavi," she said.

"At the outset, I would like to remind Radharavi and the likes of misogynists like him that they were also given birth by a woman. By demeaning the status of women and passing sexist remarks, these retarded men get a feeling of machismo," she said.

Nayanthara said she was "terribly sorry" for the way they treat women in an opinionated way and empathised with twomen living in "families of these macho men".

Radharavi should have led the younger generation by example, but has chosen to be "a misogynist role model," she said, adding that women were asserting their due place in this era of meritocracy.

"When actors like Radharavi fall out of business and become irrelevant, they tend to rely on cheap popularity tactics in order to grab some limelight," Nayanthara said.

She expressed concern over the actor receiving applause for such remarks and said with such audience, such misogyny will continue.

"I would like to strongly register my condemnation and protest against derogatory speeches made by Radharavi against women and children in general and me in specific," she said.

She asked SIAA to set up an Internal Complaints Committee as per the Supreme Court order and "commence an internal inquiry as per Vishakha guidelines".

Meanwhile, Radharavi expressed regret for his remarks. He said he would have "been reprimanded", especially by the media itself at the event, if he had said something wrong.

"To Nayanthara and Vignesh (Shivan), I express regret. Because it is a matter of anguish that it (his remarks) has affected them...they hail from my cinema industry," he told Tamil TV channel Puthiya Thalaimurai.

Haasan said it was the duty of every man to treat women with respect, adding that it was "regrettable' to see Radharavi make such remarks.

"She (Nayanthara) is a woman and belongs to our industry. We have the first responsibility to treat her with respect," he told reporters. He also lauded DMK for suspending Radharavi.

Shivan, said to be a close friend of Nayanthara, had raised the issue on Twitter, tagging Stalin and Kanimozhi, and sought action against "crass and sexist" Radharavi.

He said both Stalin and DMK leader Kanimozhi had "vociferously" spoken against the Pollachi sexual harassment case and asked "why don't you take stringent action against" the actor too.

Nayanthara, who has acted with top south Indian stars, including Rajinikanth, Vijay and Ajith Kumar, is also known for featuring in women-centric themes like 'Aram' and 'Kolamavu Kokila'.

She had also starred with Telugu star Balakrishna as Seetha in 'Sri Ramarajyam,' a reel depiction of The Ramayana.

SIAA chief M Nasser said the latter has been making such remarks for long in public fora, including cinema events, and that "you have made it a routine affair to belittle women".

Such "lowly utterances" would not only belittle his stature, but also erode public confidence in the film industry, Nasser said and expressed hope Radharavi would desist from making such remarks again.