The Bharatiya Janata Party on Thursday fielded 13 disqualified Congress-Janata Dal Secular legislators as its candidates for the December 5 assembly byelections in Karnataka hours after the rebels joined the ruling party in the state. 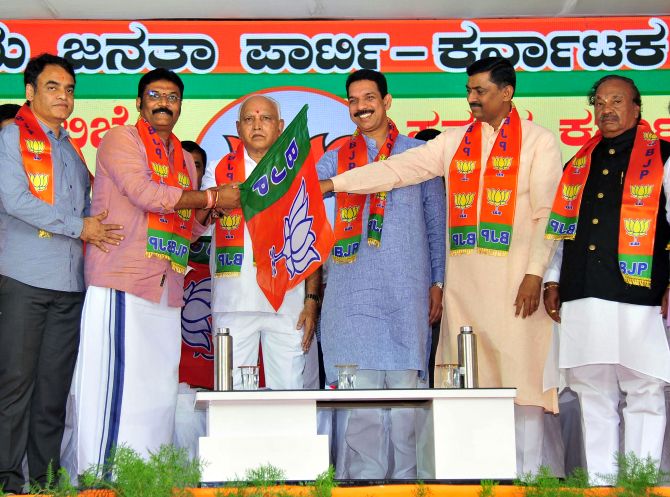 The party aiming to win a majority of the 15 seats that will go for the bypolls announced a list of 14 candidates with the nominee for Ranebennur constituency yet to be named.

A day after the Supreme Court paved the way for them to contest the bypolls, as many as 16 disqualified MLAs on Thursday joined the BJP at the party office in Bengaluru.

The disqualified MLAs, whose rebellion led to the fall of the Kumaraswamy government and the return of the BJP to power in July, were inducted in the presence of chief minister B S Yediyurappa, state BJP president Nalin Kumar Kateel and national general secretary in-charge of Karnataka P Muralidhar Rao among others.

The Supreme Court on Wednesday had upheld the disqualification of 17 Congress-JDS MLAs in Karnataka by then assembly speaker K R Ramesh Kumar but allowed them to contest the bypolls necessitated by the action against them.

The court had set aside the portion of the speaker's order by which the MLAs were disqualified till the end of the current assembly's term in 2023.

While, the 13 disqualified MLAs have been fielded again from their respective seats, M Saravana, a former corporator, has been has been given the ticket from Shivajinagar, denying it to R Roshan Baig, a disqualified Congress legislator from the constituency.

Baig, a seven-time MLA, has not been inducted into the party, unlike 16 other disqualified legislators who were welcomed into the BJP fold.

BJP sources cited "reservations" expressed by party leadership over Baig, who faced inquiry in the IMA ponzi scam, among the reasons for his non-induction and denial of ticket.

Interestingly, Baig, a former minister, on Wednesday had claimed he will join the BJP along with the other legislators.

According to sources close to Baig, he met the chief minister and expressed his displeasure and also was contemplating contesting as an independent candidate after consulting his supporters.

Though disqualified MLA R Shankar, who represented Ranibennur, had been inducted into the party, the candidate for the seat has not yet been finalised.

Party sources cited doubts about Shankar's winnability and pressure within the party as reasons for not giving him the ticket.

Besides, there was also lobbying by aspirants, especially senior minister and party leader K S Eshwarapp's son Kantesh for the seat, they said.

Shankar was elected on the Karnataka Pragnyavantha Janatha Party ticket in 2018 assembly polls, and had repeatedly switched sides since then.

Subsequently, he had merged the KPJP with the Congress.

As he had camped with rebel MLAs leading to the fall of coalition government, he was disqualified on the Congress' petition.

The last date for filing of nominations for the bypolls is November 18.

The BJP will need to win at least six out of those 15 seats to remain in power.

Speaking after welcoming the disqualified legislators into the party, Yediyurappa urged the party workers to put in their efforts to ensure the success of the BJP nominees keeping aside differences.

His appeal comes amidst rebellion by a few within the party against giving tickets to the disqualified MLAs.

On Thursday, Sharath Bachegowda in Hoskote filed nomination as an independent candidate, while former party MLA from Kagwad, Raju Kage. joined the Congress.

Yediyurappa also expressed confidence about winning all the 15 seats.

Fifteen out of the 17 constituencies represented by these MLAs will be going for bypolls, while by-elections to Maski and R R Nagar constituencies have been withheld as litigations related to them are pending before the Karnataka high court.

Of the 15 seats, as many as 12 were represented by Congress and three by the JD-S.