News
Business
Movies
Sports
Cricket
Get Ahead
Money Tips
Shopping
Sign in  |  Create a Rediffmail account
Rediff.com  » News » Can't quit until I have finished what I started: Army chief

Can't quit until I have finished what I started: Army chief

Army Chief Gen V K Singh, who lost his battle with the Defence Ministry on the age row, feels the Supreme Court has "not effectively" closed the issue but ruled out his resignation.

"It would be dishonest to say that that I was not under pressure to resign.  Even my closest advisors were affected by the media interpretation and, yes, I was extremely disappointed that the Supreme Court had not effectively closed the issue.

"......as chief of army staff, I have a responsibility towards the army and its men and have to attend to the unfinished tasks that I had set out for myself.  I cannot quit until I complete what I have started. Organisational interests are supreme," he told Outlook magazine in an interview.

Gen Singh said many commentators were looking at this matter as a classic case of strained civil-military relations, and drew parallels with the unfinished resignation of Gen  K S Thimmayya, to predict  his resignation.

"But I see the age as something that I and the army have to address, and we will do it once we are a given legal order," he said in reply to a question about the wide speculation that he would resign since the Supreme Court did not upheld his case.

Gen Singh said the apex court order has created more confusion, without addressing the main issue. It talks of a statutory complaint being divided into two parts -- the process of decision-making on the one hand and maintainability on the other.
PTI
Source: PTI© Copyright 2021 PTI. All rights reserved. Republication or redistribution of PTI content, including by framing or similar means, is expressly prohibited without the prior written consent.
Related News: K Singh, Defence Ministry, Army, Thimmayya
SHARE THIS STORY
Print this article
NCTC: Centre invites meet of chief secys, DGPs
'Zardari had prior knowledge of US raid on Osama compound'
Indian Air Force to phase out MiG 21s from 2014 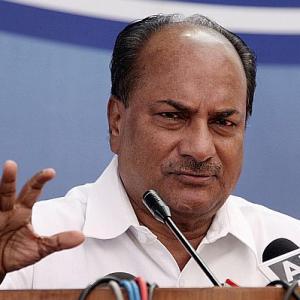