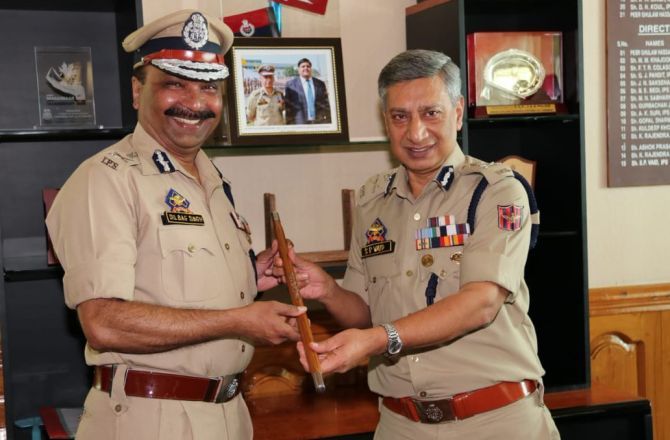 IMAGE: Dilbag Singh, left, takes over as the new DGP of Jammu & Kashmir from S P Vaid, right, who was shunted out on Thursday. Photograph: Courtesy @JmuKmrPolice/Twitter

Dilbag Singh took over as the new Director General of Jammu and Kashmir Police on Friday after his predecessor S P Vaid was shunted out and posted as Transport Commissioner Thursday night.

Immediately after taking over as the new police chief, Singh, a 1987-batch IPS officer from the state, said that his priority was to stamp out terrorism from Jammu and Kashmir at the earliest, while protecting the interests of common people.

A 1986-batch IPS officer, Vaid, who was unceremoniously removed as police chief, passed on the baton to Singh at a simple ceremony held at the police headquarters in Srinagar.

In a related development, the state government informed the Supreme Court about its decision of appointing Singh as an acting police chief.

State government counsel Shoeb Alam said the government was seeking modification of the July 3 order by which a state was required to send the names of three senior IPS officer well in advance to the Union Public Service Commission for clearance before appointing an officer to the post of DGP.

A bench comprising Chief Justice Dipak Misra and Justices A M Khanwilkar and D Y Chandrachud considered the submission of the state government and posted the matter for hearing on September 10.

The 55-year-old Singh, who has served the state police in various capacities, said he would also work for the welfare of police personnel, who have been at the forefront of anti-militancy operations.

The new police chief said it is a daunting task but he is sure the Jammu and Kashmir Police will pass all tests with flying colours.

"My priority as of now is to deal with terrorism firmly, while protecting the interests of innocent common people. I have held a meeting with my senior officers at the police headquarters after taking over and will be interacting with district superintendents, range DIGs and Zonal IGs in the evening to have a brief on the ground situation and our priorities," he said.

Calling the responsibility a great honour, he said due attention would be paid to the welfare of the all police ranks, especially the jawans. The state government is seriously concerned about that, he said.

"The JK Police has earned a name for itself and it is duty for all of us to take it to greater heights," he added.

Vaid, who has been made transport commissioner, is believed to have been removed because of continuous friction over interference in the police work by the state's bureaucracy.

He has been shifted as Transport Commissioner, a post which was held by Saugat Biswas, a 2006-batch IAS officer. The post has been upgraded from Additional Secretary to the rank of Secretary. It will be headquartered in Jammu.

Before demitting office, Vaid expressed satisfaction that he was able to serve the people of the state.

"I'm thankful to God that he gave me the opportunity to serve my people and my country. I'm grateful to police, security agencies, and people of state for their support and their faith in me. My best wishes to the new DGP," Vaid said.

"My only concern is the youth which is dying and unnecessary loss of human life. The sooner it ends, the better it would be," he said.

Former chief minister of Jammu and Kashmir Omar Abdullah criticised the timing of changing the state DGP, saying there was no hurry to replace Vaid and the state police could do without having to deal with the confusion of leadership.

"Changing the DG is the prerogative of the administration but why a DG as a temporary arrangement? The current DG won't know if he's going to stay and others who would like his job will be trying to replace him. None of this is good for @JmuKmrPolice," Omar tweeted.

The state government removed Vaid as the DGP late Thursday night and handed over the charge to DG (Prisons) Dilbagh Singh till a permanent appointment is made.

However, officials privy to the development said that Singh would continue as the Director General of Police and all necessary formalities including seeking permission from the UPSC was being taken. 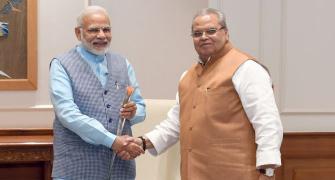 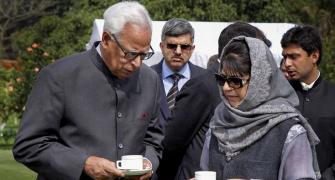 A timeline of Governor's rule in J&K 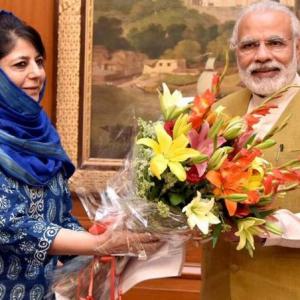 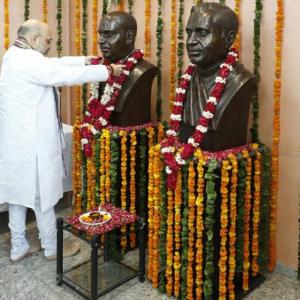