For nearly 12 years, Mohammad Jawid waited for a verdict that could give justice to his brother and his family, who lost their lives in the 2007 Samjhauta Express blast. 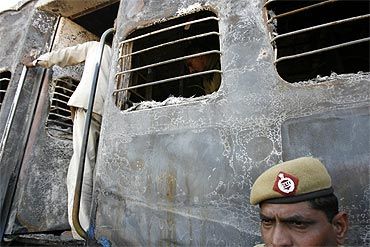 But after a court let off four accused, including Swami Aseemanand, in the case on Wednesday, Jawid was distraught.

"We did not get the justice. The real culprits are still out. This is not a right verdict," the 37-year-old said over the phone from Gaya.

Jawid said his mother died in 2008 due to the shock.

Recalling the incident, Jawid said the blast occurred in the night, but they only got to know about it in the morning.

He reminisced about the time he spent with his brother and his family in the national capital.

Jawid had two brothers and three sisters. His brother, Shabbir, aged 40 at the time of his death, had moved to Pakistan to stay with his relatives while he was a child. He would come to India to be with his parents in Gaya.

"But due to tensions between India and Pakistan, his visits dropped. However, after the death of my father, he visited India. The visit was also 17 years after his marriage," he said.

After spending time with his mother and siblings in India for a month, Shabbir, his family of five and five more relatives left for Pakistan by taking the Samhjauta Express when the blast occurred.

Jawid said he also did not get compensation of Rs 10 lakh announced by the Centre as the DNA samples between Shabbir and his family did not match.

"We also contested this in the Delhi high court and the Supreme Court, but the judgement went against us. We went to the railways tribunal, but even they rejected our claim stating that my mother, the immediate kin of the deceased, was also dead," he added.

A special court in Haryana acquitted Aseemanand and three others on Wednesday in the Samjhauta train blast case that left 68 people, mostly Pakistanis, dead.

The blast took place near Panipat in Haryana on February 18, 2007, when the train was on its way to Attari in Amritsar, the last railway station on the Indian side.