Pradhan made BJP poll incharge for UP, Shekhawat in Punjab 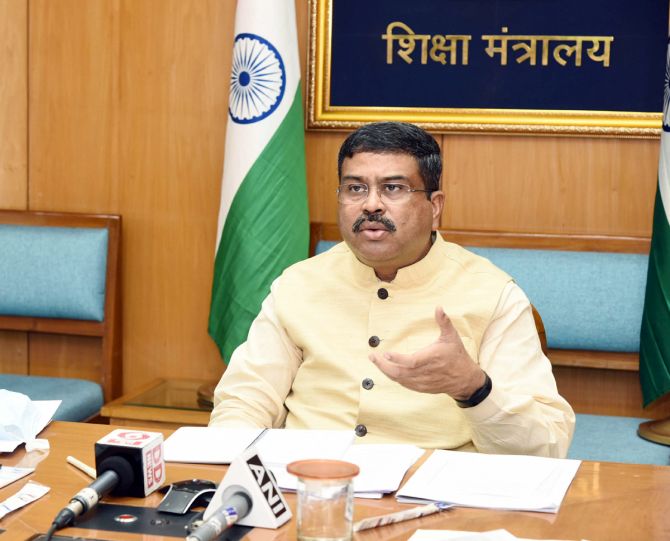 Former Maharashtra Chief Minister Devendra Fadnavis has been given charge of Goa polls.

The party also drafted in a number of Union ministers and other leaders to assist them in the campaign, with Union ministers Anurag Singh Thakur, Arjun Ram Meghwal, Shobha Karandlaje and Annapurna Devi Yadav along with Saroj Pandey, Vivek Thakur and Captain Abhimanyu made co-incharges for the polls in Uttar Pradesh, a statement said.

The focus on the all-important Uttar Pradesh polls was apparent in the announcement made by the BJP as it also appointed organisational in-charges for its six regions.

Union ministers Hardeep Singh Puri and Meenakshi Lekhi have been named co-incharges for the Punjab polls along with MP Vinod Chavda.

The BJP is at the receiving end of the farmers' protests against three farm laws in Punjab, a state which is seen as the most affected by the stir.

The saffron party has been pulling out all stops to emerge as a strong force in Punjab which is set for a multi-cornered contest among the ruling Congress, Aam Aadmi Party, Shiromani Akali Dal-Bahujan Samaj Party alliance and the BJP.

The party is in power in UP, Uttarakhand and Manipur and has deployed its well-oiled election machinery to retain power there.

While its main challengers in Uttar Pradesh are Samajwadi Party and the Bahujan Samaj Party with the Congress trying hard to shore up its base, the BJP is in direct contest with the Congress in Uttarakhand and Manipur. Regional parties also play an important role in Goa.