Calling the political condition prevailing in West Bengal "horrible and frightening", Governor Jagdeep Dhankhar alleged on Tuesday that the people of the state do not have the freedom to exercise their franchise fearlessly. 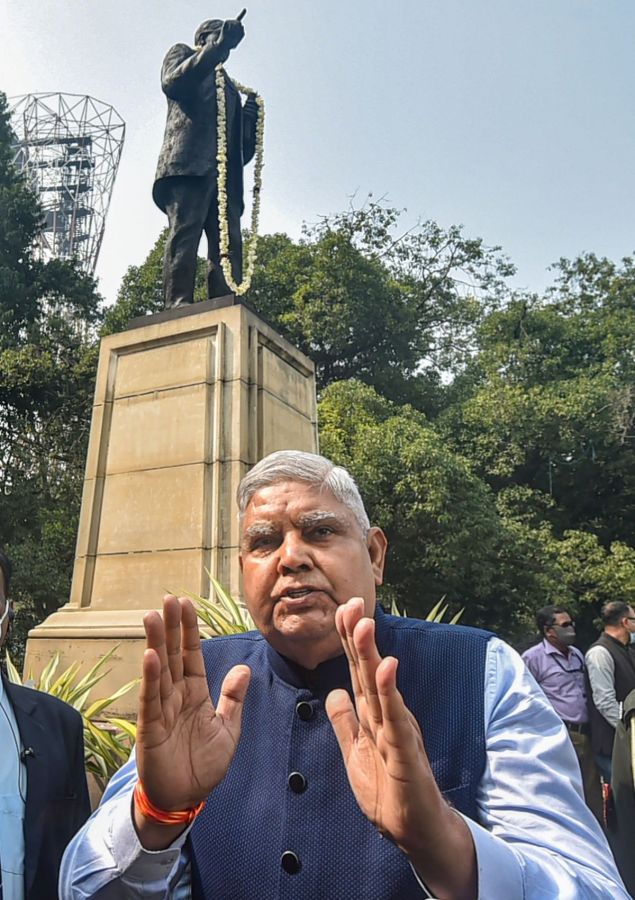 The speaker shot back, terming the governor's accusation "uncalled for" and stating that it was "discourteous" of him to have made such remarks.

Dhankhar, after paying floral tributes at the statue of B R Ambedkar on the assembly premises on National Voters Day, said, "We have seen post-poll violence of unprecedented level. Those who dared to vote according to their own volition had to pay the price with their life... Democracy is in deep peril here.”

Noting that a fact-finding committee appointed by the chairperson of the National Human Rights Commission had observed that rule of the ruler and not the law prevails in the state, the governor said, "This is an understatement; West Bengal's situation is so horrible and frightening that there is horror about the ruler here."

He came down heavily on Speaker Biman Banerjee, accusing him of violating constitutional norms and not providing information sought by him.

"The speaker.... he thinks he has the license to talk anything about the governor," Dhankhar told reporters.

He claimed on several occasions the speaker did not provide him the information he had sought, including details of the assembly resolution on extension of BSF's area of operation.

Dhankhar alleged his address to the assembly was blacked out twice.

"Does he not know Article 168 -- governor is number one in the legislature..... I will not withstand such indiscretions, unconstitutional work. The speaker shall not henceforth blackout address of the governor. If he does so, he will face music of law," Dhankhar said on the lawns of the assembly as the speaker stood a little distance away.

The governor also accused Chief Minister Mamata Banerjee of failing to provide answers to his queries.

Dhankhar said that the CM is "duty-bound" under Article 167 of the Constitution to provide such information.

"It is my duty to ensure that Constitution is protected, preserved and defended," he said.

The governor claimed that the CM has not shared with him information on formation of Pegasus enquiry commission, global business summit, expenditure on Covid pandemic-related purchases of the state, Maa canteen among other matters.

Maintaining that the chief minister herself has started an inquiry into pandemic purchases, he asked, "Where is the report?"

He pointed out that Maa canteen, under which a meal is provided to people at Rs 5, was to be operational from April 1, 2021 as per budgetary provisions, it started 45 days ahead, and sought to know where the funds came from.

The governor said that it was a matter of shame that Leader of Opposition Suvendu Adhikari was meted out ”ill-treatment”, notwithstanding a high court directive on his visit to Netai.

Iterating that the state's chief secretary and DGP have failed to respond to the call of the governor, he said, "Have these officials become law unto themselves?"

Alleging that the bureaucracy in the state is "politically committed", Dhankhar asked, "Are they servants of the Constitution, are they to follow rule of law or the diktat of an individual?"

He also lambasted the district magistrates of West Bengal for not attending an all-India meeting chaired by Prime Minister Narendra Modi.

"Bureaucracy is required to be politically neutral, its actions should be dictated by rule of law," he said.

On his queries on appointment of consultants by the state government, a matter raised by the CM before the prime minister during a virtual interaction, Dhankhar claimed that Banerjee had taken the issue out of context.

Dhankhar asserted that no file was pending with him with respect to any bill or government recommendation.

He clarified that it would be wrong to say that files on appointments of the state's lokayukta, information commissioner, human rights commission and the Howrah Municipal Corporation bill were pending before him, because he has posed queries on these but got no reply.

He said that the speaker had talked about the pendency of another bill, but that has been rejected by the President of India during the term of his predecessor.

"I hope good sense will prevail on him. In every forum, he wants to tarnish the image of the governor by talking about things which are absolutely incompatible with his office," Dhankhar stated.

Reacting to Dhankhar's accusations soon after, Biman Banerjee said it was "extremely discourteous" of the governor to have made such remarks.

"The honourable governor had come to pay tribute to B R Ambedkar. It was not known to us that he will be utilising this platform for a press conference. This is totally unwarranted and discourteous.

"Assembly is such a place where he should work within his jurisdiction and I will within mine," the speaker contended.

Banerjee said that the Howrah Municipal Corporation bifurcation bill is yet to receive assent and he had no information about the President rejecting the state's lynching-related bill, which the governor claimed to have happened.

"He is asking for translations of the contents of bills. He asked for incorporating words chosen by him. I have never heard such comments from any governor," the speaker said, claiming that these are "pretexts" to delay the bills from getting enacted.

"So far our assembly is concerned, we go according to the rules and the Constitution," he said.

The speaker sought to know why Dhankhar raised the matter of post-poll violence on the House premises as the issue is still sub-judice.

He underlined that that no other governor ever made such accusatory remarks, and that the constitutional head and the government have always worked in a cordial atmosphere everywhere.

"I do not understand what he wants to say or whose spokesperson he is here," the speaker said.

Banerjee said that such comments can be made at a debate but a governor making such remarks before the statue of Ambedkar is "uncalled for".

"Whatever we had said in our letter to the President of India is all true," he added.

The speaker had in December written to President Ram Nath Kovind and Prime Minister Narendra Modi to apprise them of Dhankhar's alleged "interference" in legislative matters.