Wearing masks and strictly adhering to COVID-19 protocols, devotees of Lord Ayyappa trekked the holy hill Sabarimala and offered prayers at the famous temple as it opened for the annual two-month-long Mandala-Makaravilakku season on Monday morning. 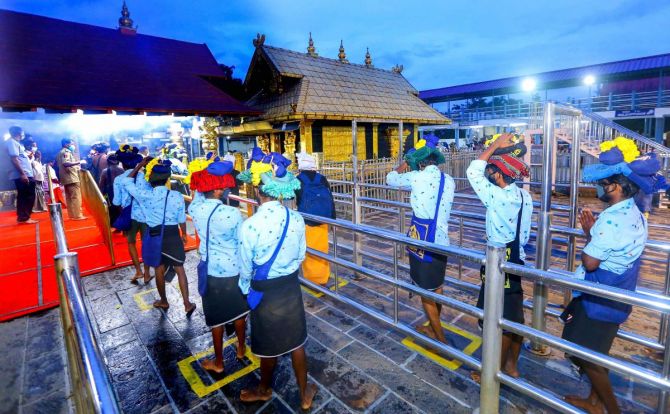 It is the first annual pilgrimage season at the hill temple after the coronavirus outbreak and authorities have decided to restrict the number of devotees to 1,000 per day and to 2,000 on weekends.

However, the "Sannidhanam", the temple complex which used to witness a sea of devotees on the first day of the Malayalam month of Vrichikam, saw only a few devotees on Monday morning.

Pilgrims, having COVID-19 negative certificates, were allowed to trek the hills since 3 am from Pampa, the base camp, through a virtual queue system, temple officials said.

Devotees from neighbouring states were among the most who flocked the shrine in the initial hours, sources in the Travancore Devaswom Board, that manages the hill shrine, said.

In total contrast to normal times, when there would be a mad rush right from the holy 18 steps and in front of the sanctum sanctorum jostling for a glimpse of the presiding deity, only a few scattered devotees in batches could be seen having a relaxed darshan on many occasions during the day.

Wearing masks, employees of the board and police personnel, some of them clad in personal protection equipment kit, kept vigil at various points from the base camps to the temple complex to ensure that the devotees followed the COVID-19 protocols.

The rituals began with tantri (head priest) Kantaru Rajeevaru performing the 'Ashtadravya Maha Ganapathy homam' at the Sannidhanam, they said.

A TDB official said around 650 devotees offered prayers at the hill temple till noon on the first day.

Two devotees tested positive for the viral infection on Monday and both of them were sent to a first line treatment centre at nearby Konni, he said.

"Both the devotees -- one from Punalur in Kerala and the other one from Chennai-have been tested positive for the virus while undergoing a test at a health department kiosk at Nilakkal, another the base camp," the official said. 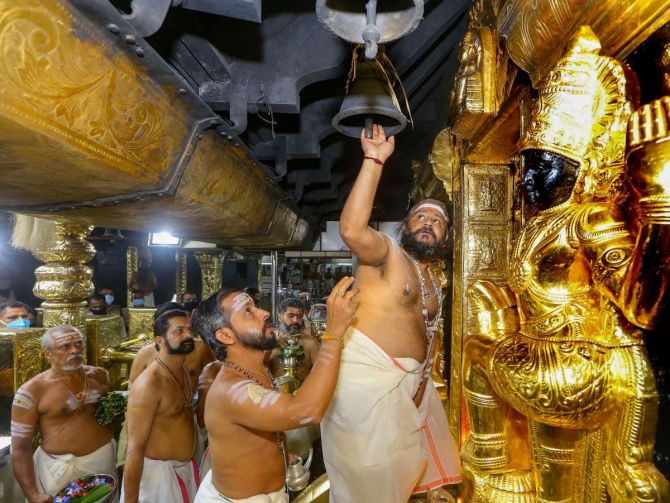 State Devaswom Minister Kadakampally Surendran said all arrangements had been completed to ensure a smooth darshan for the devotees during the pilgrimage season.

"Arrangements have been made in compliance with the COVID-19 norms and in accordance with the directions of the Kerala high court," he told reporters at the Sannidhanam after taking part in a review meeting of various government departments.

Detailing various measures taken by the government to ensure social distancing at the temple premises and trekking route, the minister said floor markings have been made in various points and steps have been taken to make devotees abide by the instructions.

Though the shrine opened on Sunday evening, there was no special pooja on Sunday and devotees were permitted inside the complex only on Monday morning.

Marking the beginning of the 62-day-long pilgrimage season, Melshanti A K Sudheer Namboothiri had opened the doors of the sanctum sanctorum and lit the lamps in the presence of the Tantri on Sunday evening.

Each day, only 1,000 pilgrims, who have booked through the virtual queue system, would be allowed to offer prayers.

They have to carry COVID-19 negative certificates obtained 48 hours before they reach Nilackkal and Pamba.

COVID-19 kiosks were opened at the base camps for testing and the pilgrims won't be allowed to stay at the temple premises, official sources said.

According to the TDB, about 85,000 devotees would offer prayers during this pilgrim season which used to draw lakhs of people in the past.

During Saturdays and Sundays, 2,000 people would be allowed for darshan and on Mandala pooja and Makaravilakku days 5,000 pilgrims would be permitted, it added.

In view of the pandemic, the health department has made elaborate arrangements for rapid antigen tests in various centres, including all bus stands and railway stations, at Thiruvananthapuram, Tiruvalla, Chengannur and Kottayam, where pilgrims arrive to proceed to the Ayyappa temple.

As per Covid protocols, those in the 10-60 age group would only be allowed to offer prayers at the shrine.