Devotees throng Shani temple on Saturday after lifting of ban 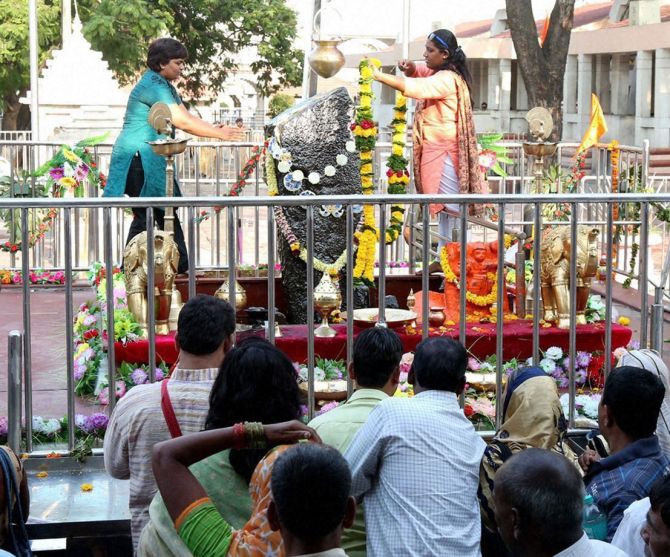 Men and women made a beeline to sanctum sanctorum of famous Shani temple at Shingnapur in Ahmednagar since morning to offer prayers on the first Saturday, a day traditionally devoted to the deity, after lifting of 400-year -old ban on entry of women into the shrine’s core area.

The temple trust on Friday lifted the ban following Bhoomata Brigade’s agitation against gender bias and the Bombay high court order upholding the equal rights to worship. Soon after the temple trust announced the decision, some women devotees entered the sacred area and offered worship.

Later, Bhoomata Brigade leader Trupti Desai, who had led a sustained campaign over the issue, reached the temple located in western Maharashtra and offered prayers.

A smooth access to the hitherto prohibited area of the temple brought cheer to women devotees as they poured oil on the ancient black stone idol and offered flowers to the deity on Saturday, traditionally marked by prayers to Lord Shani and Lord Hanuman whose images are jointly installed at many temples.

However, the sarpanch (headman) of Shingnapur Balsaheb Bankar said that although the decision to open all gates of the temple to all devotees was taken to honour the high court order, he personally felt that the sentiments of the villages had been “hurt” by the development.

“An age old religious tradition to protect sanctity of the temple has been broken,” Bankar said.

The chief trustee of the templeAnita Shete said the trustees had taken the decision to uphold the high court directive and accordingly all devotees -- men and women -- would now have free access to the inner sanctum.

Desai, who waged the battle against gender bias at places of worship, on Friday declared the trustees’ decision as “victory for women” as she went to Shingnapur to have darshan of the deity along with her activists.

She also appealed to boards of Trimbakeshwar and Mahalaxmi temples in Nashik and Kolhapur respectively to follow suit and stop gender discrimination against women.

Interestingly, Priyanka Jagtap and Pushpak Kewadkar, the two activists of breakaway faction of Bhoomata Brigade, happened to be the first two women to have darshan at the sacred “chauthara” (platform), after lifting of the centuries old ban on the entry of women there.

The two who have formed “Swaraj” brigade had parted ways with Desai alleging that her agitation had become publicity oriented with full focus on herself, relegating the cause for which the Bhoomata Brigade stood.

Image: Women devotees offer their prayers inside the sanctum sanctorum of famous Shani temple at Shingnapur a day after the 400-year-old tradition of restricting women inside was stopped. Photograph: PTI