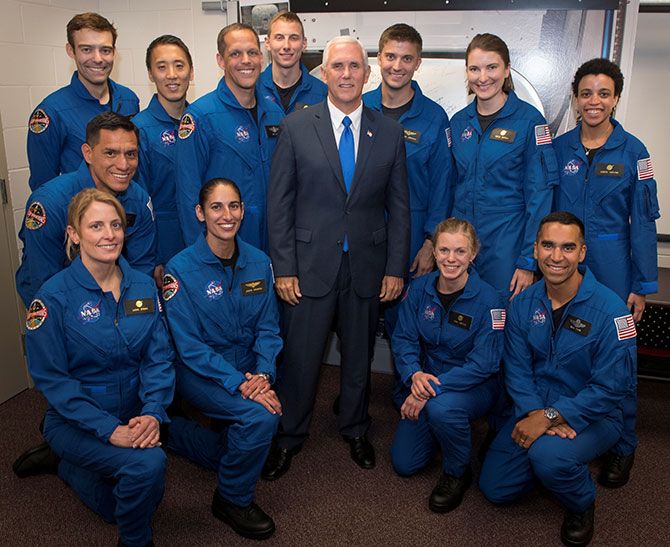 NASA has chosen 12 new astronauts, including an Indian-American, from a record 18,000 applicants

They will be trained for missions into earth orbit and to deep space.

The seven men and five women comprise the 22nd class of American spaceflight trainees since 1959. This is the largest group NASA has selected in almost two decades. They were was selected from 18,300 applicants -- more than NASA has ever had during an open astronaut call.

To get picked, the candidates had to meet certain physical requirements as well as various education and experience criteria -- like having a bachelor's degree in a STEM field or accumulating up to 1,000 hours of piloting jets.

It's clear that this new class greatly surpasses all the minimum skills that NASA requires.

After completing two years of training, the new astronaut candidates could be assigned to missions performing research on the International Space Station, or be launched from American soil on spacecraft built by commercial companies, and to fly on deep space missions on NASA's new Orion spacecraft and Space Launch System rocket.

The event unfolded inside the Johnson Space Center's Space Vehicle Mockup Facility in front of a full-scale engineering model of NASA's Orion spacecraft, which the new astronauts might fly in the coming years on missions beyond low earth orbit.

Pence said that President Donald Trump is "firmly committed" to NASA's mission in space and that "America will lead the way in space once again." He said that NASA would continue to have the resources it needs to "make history" -- even though the president's budget cuts funding and cancels certain programs at the agency.

He also mentioned that NASA would continue to collaborate with the commercial space industry in the future. 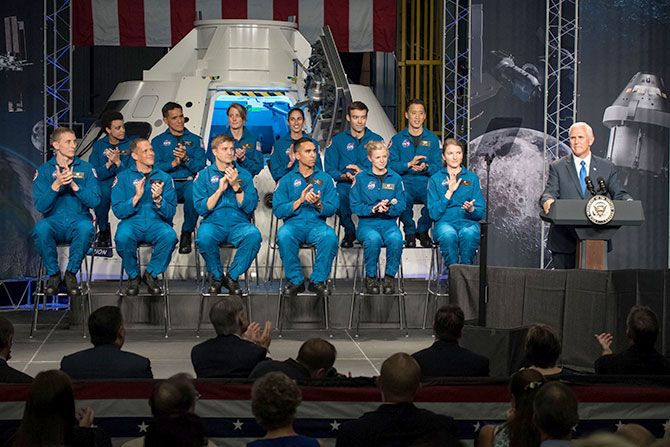 While delivering the speech, Pence touted the merits of the new astronaut class. "The courage of these men and women, and all the astronauts who have gone before, inspires me to this very day," he said.

Lt Col Raja "Grinder" Chari, 39, is a commander of the 461st Flight Test Squadron and the director of the F-35 Integrated Test Force at Edwards Air Force Base, California. Hailing from Waterloo, Iowa, Chari earned a master's degree in aeronautics and astronautics from MIT and graduated
from the US Naval Test Pilot School. His father is from India.

Lt Kayla "Sax" Barron, 29, is a US Navy submarine officer from Richland, Washington. A member of the US Navy's first class of women commissioned into the submarine community, Barron comes to NASA from the Naval Academy in Annapolis, Maryland, where she has been serving as the Flag Aide to the Superintendent.

Zena Cardman, a 29-year-old is a geo-biologist who had done research at Penn State University in Pennsylvania. Her research was focused on microorganisms in subsurface environments, ranging from caves to deep sea sediments.

Lt Commander Matthew Dominick, the 35-year-old is the head for the US Navy's Strike Fighter Squadron 115. Born and raised in Wheat Ridge, Colorado, Dominick was at sea on the USS Ronald Reagan when he got the call on May 25 saying he had been selected as an astronaut candidate.

Bob Hines, a 42-year-old NASA research pilot, is based at Johnson Space Center since 2012. Hines hails from Harrisburg in Pennsylvania. He attended the Air Force Test Pilot School for his master's degree in flight test engineering. He has served in the US Air Force and Air Force Reserves for 18 years.

Warren "Woody" Hoburg, a 31-year-old assistant professor of aeronautics and astronautics at MIT from Pittsburg, Pennsylvania, has earned a doctorate in electrical engineering and computer science from the University of California, Berkley.

Jonny Kim, a 33-year-old navy lieutenant and SEAL, who has has been on active duty reserve while completing his residency at Massachusetts General Hospital.

Robb Kulin, the 33-year-old lead of the Launch Chief Engineering group at SpaceX in Hawthorne, California. He has previous experience as an ice driller in Antarctica on the West Antarctic Ice Sheet and Taylor Glaciers and as a commercial fisherman in Chignik, Alaska.

Major Jasmin Moghbeli, 33, is a quality assurance and avionics officer for the Marine Corps' Operational Test and Evaluation Squadron 1 in Yuma, Arizona.

Francisco Rubio, is a 41-year-old major, serving as a surgeon for the 3rd Battalion of the Army's 10th Special Forces Group. He earned a Doctorate of Medicine from the Uniformed Services University of the Health Sciences.

Jessica Watkins, a 28-year-old postdoctoral fellow at the California Institute of Technology (Caltech), where she collaborates on NASA's Mars Science Laboratory for the Curiosity rover. She has worked at NASA's Ames Research Center in northern California.

Seema Kachru
© Copyright 2022 PTI. All rights reserved. Republication or redistribution of PTI content, including by framing or similar means, is expressly prohibited without the prior written consent.