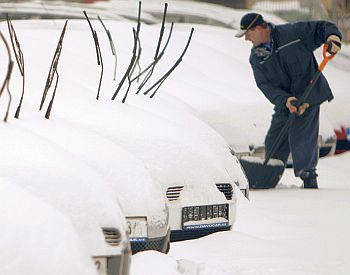 Depression "Daisy" unleashed blizzards across most parts of Europe, aggravating chaos on roads, railways and at airports.

Hundreds of flights were cancelled and train services severely disrupted in Germany, France, Britain, Italy, Spain, Switzerland, Poland and in the Scandinavian countries.

Fresh snow worsened the conditions on the roads and contributed to numerous accidents and in some parts of Europe motorists had to spend the night in their vehicles after thick snow and overturned vehicles blocked the roads and highways.

A ten to 23 cm thick carpet of snow covered the whole of Germany for the first time in many years and completely paralysed the transport services in some Baltic Sea islands and coastal regions.

The German Weather Service in Offenbach, near Frankfurt said a thick carpet of snow covering the entire nation was a rare occurrence and forecast more snow as "Daisy" continues to create havoc in the coming days.

At the Frankfurt Airport, more than 220 flights were cancelled on Saturday as the snow-clearing teams struggled to keep the runways free of ice. Hundreds of stranded travellers were forced to stay at hotels or to make use of emergency beds provided by the airport.

At the Nuremberg Airport, 136 passengers and crew of an Air Berlin Boeing 737 aircraft had a lucky escape on Friday night when the plane skidded off the runway while preparing to take off on a flight to Dortmund.

None of the passengers or crewmembers suffered any injuries and they left the plane through the rear door, but the aircraft suffered some damage, airport authorities said. Snow and frozen ice on the roads severely disrupted road traffic in the state of Baaden Wuerttemberg and caused more than 200 accidents since Friday evening, state officials said.

At the French-German border, over 500 vehicles got stuck in a three-kilometre traffic jam after the French authorities closed a highway, which was blocked by heavy snow.

Over 100 accidents were reported in the state of North Rhine Westphalia and in one accident, the driver of a car was killed in a collision with another vehicle.

In eastern Europe, blizzards caused severe traffic chaos in Poland and in the Czech Republic and some regions were without electricity for more than a day. In the Russian Caucasus region, five mountaineers were killed in an avalanche.

"Daisy" spread a thick blanket of snow over large parts of France and created widespread traffic chaos, disruption of train services and cancellation of a number of flights at the airports in Paris, Toulouse, Brest and Lyon.

Thousands of households were without electricity in the Arles and Montpellier regions after power lines collapsed under the weight of snow.

Image: A worker clears snow from cars in a second hand car shop in the village of Olbramovice, 65km south from Prague.
Photograph: Petr Josek/Reuters 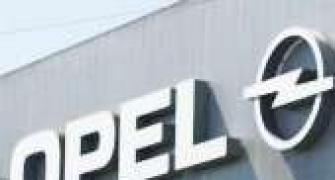