Stepping up the opposition tirade against demonetisation, former Prime Minister Manmohan Singh on Thursday castigated the government and Prime Minister Narendra Modi over the move, saying its implementation was a "monumental management failure" and a case of "organised loot and legalised plunder." 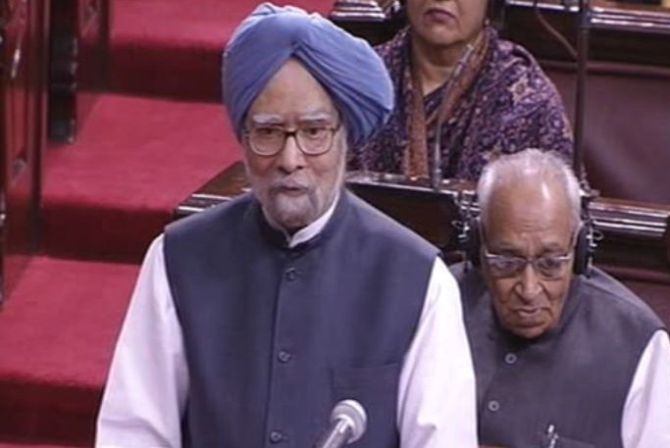 Dr Singh, who spoke in the presence of Prime Minister Narendra Modi in Rajya Sabha, said the decision will result in decline of GDP by 2 per cent, it being an "under-estimate".

He hoped the prime minister will find a practical and pragmatic decision to mitigate the sufferings of the common man and the poor who have been in distress after the decision.

He said agriculture, unorganised sectors and small industry has also been hit hard by it and people were losing faith in the currency and banking system.

"These measures convinced me that the way the scheme has been implemented, it's a monumental management failure. And in fact, it is a case of organised loot and legalised plunder. It is not my intention to pick holes what this side or other side does. But I sincerely hope that the PM even in this late hour will help find us practical and pragmatic ways to provide relief to the suffering of the people of this country," he said in Rajya Sabha as the debate on the issue resumed after Modi came into the House.

Earlier, Leader of Opposition Ghulam Nabi Azad requested Chairman Hamid Ansari and Leader of the House Arun Jaitley that the Question Hour should not be taken up as the Prime Minister was present in the House and the debate be taken up.

Azad's request was readily accepted by the government with Jaitley saying that the debate should start immediately and Modi will certainly participate in it.

Participating in the resumed debate, Singh said it is important to take note of the grievances of the ordinary people who have suffered as a result of this imposition on the country "overnight" by the prime minister.

"My own feeling is that the national income, that is the GDP of the country, can decline by about 2 percentage points as a result of what has been done. This is an under-estimate and not an over-estimate.

"Therefore, I feel the Prime Minister must come with some constructive proposal on how we can implement the scheme and at the same time prevent the distrust that has been caused to the common people," Singh said.

The former prime minister did not agree with the prime minister's plea to wait for 50 days for the results of demonetisation to come about, saying no one knows about the final outcome of the decision.

"Well 50 days is a short period, but for those who are poor and deprived sections of the community even 50 days of torture can bring about disastrous effect. And that's why about 60 to 65 people have lost their lives. Maybe more.

"What is more is, what has been done can weaken and erode our people's confidence in the currency system and in the banking system," he said.

Asking Modi to spell out the names of countries where people have deposited their money in banks but are not allowed to withdraw their money, he said, "this alone I think is enough to condemn what has been done in the name of greater growth."

He said the scheme of demonetisation, the way it is being implemented, will hurt agricultural growth in our country, small industry and all those people who work in the informal sectors of the economy.

Singh, an eminent economist, criticised the government for issuing fresh instructions and modifying the rules every day on the conditions under which people can withdraw their money.

"That reflects very poorly on the Prime Minister's Office, the finance minister's office and on the Reserve Bank of India. I am very sorry that the Reserve Bank has been exposed to this kind of criticism which I think is fully justified," the former prime minister said.

He said though he agreed with the objectives of the scheme to demonetise currency notes of Rs 500 and Rs 1000 as spelt out by the prime minister, he wished to highlight the problems that the common people and poor have been subjected to by the move.

"But I do want to point out at least that in the process of demonetisation monumental mismanagement has been undertaken about which today there is no two opinions in the country as a whole," he said.

Referring to those saying that the move which was doing harm and creating distrust in the short run was good in the long run, Singh quoted John Maynard Keynes to say that "in the long run, all of us are dead".

"I urge upon the Prime Minister to find practical, pragmatic ways and measures to relieve the distress of the people, who happen to be a great majority of our people. After all 90 per cent of our people were in the informal sector, 55 per cent of our workers in agriculture are feeling distress," he said.

He also noted that the cooperative banking system which served large number of people in rural areas was non-functional and has been prevented from handling cash.

The senior Congress leader said though it is not his intention to pick holes in what this side or other side does, but hoped that the Prime Minister "even in this late hour will help find us practical and pragmatic ways to provide relief to the suffering of the people of this country".