Nine years after taking up the cudgels against Supertech Ltd, home buyers finally got relief from the Supreme Court on Tuesday as it ordered demolition of the under-construction twin 40-storey towers which would have blocked sunlight and fresh air, violating building norms “in collusion” with Noida (New Okhla Industrial Development Area) officials. 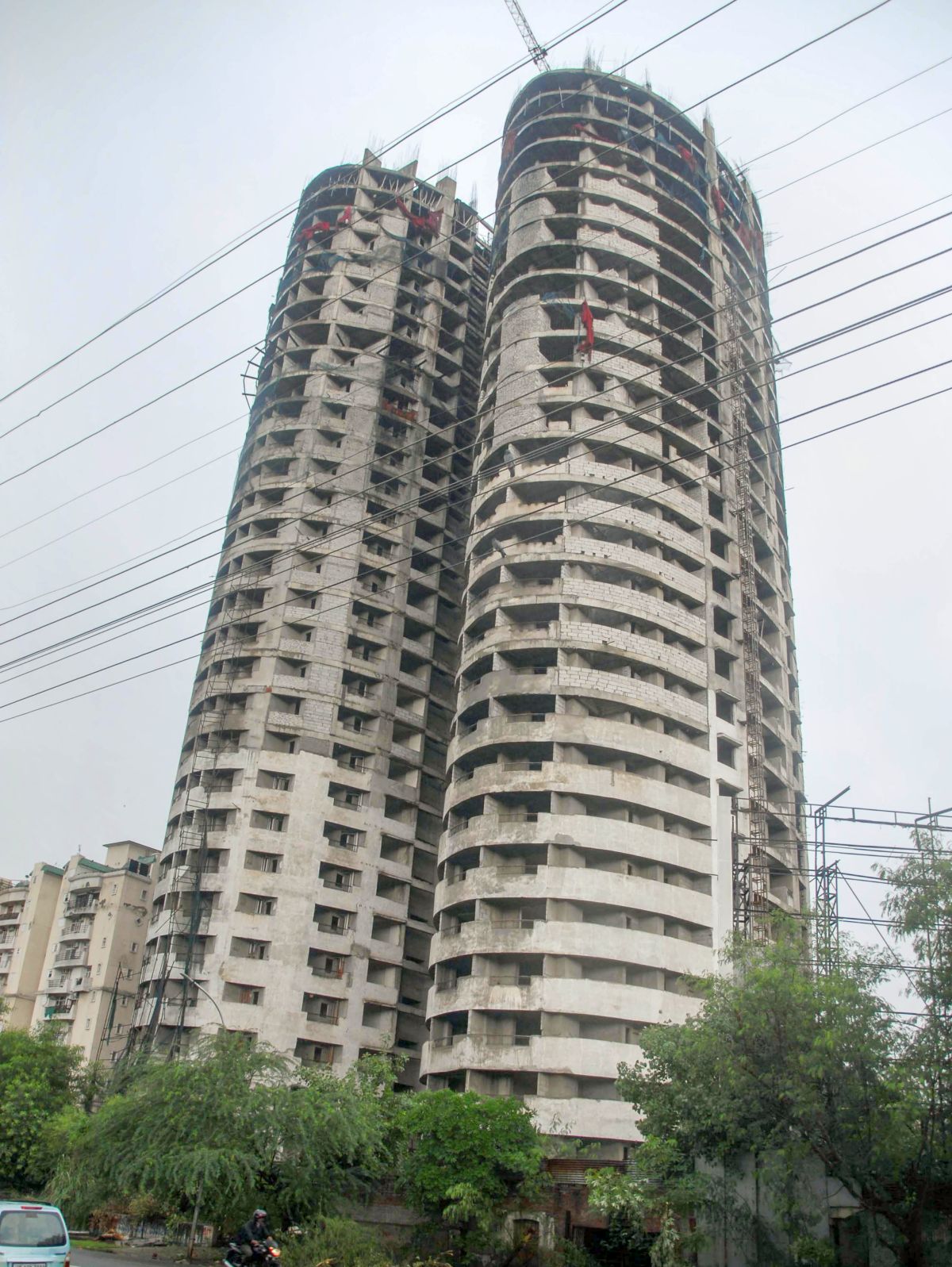 The case revealed a “nefarious complicity” of the planning authority (Noida) in violation of the provisions of law by the developer (Supertech), the apex court said.

A bench of Justices D Y Chandrachud and M R Shah said, “The order passed by the (Allahabad) high court for the demolition of Apex and Ceyane (T-16 and T-17) does not warrant interference and the direction for demolition issued by the high court is affirmed”.

The top court said it is also affirming the high court order for sanctioning prosecution under provisions of Uttar Pradesh Urban Development Act and Industrial Area Development Act, against the officials of the Supertech Ltd and the Noida officers for violation of the law.

The judgments of this Court spanning last four decades emphasise the duty of planning bodies, while sanctioning building plans and enforcing building regulations and bye-laws to conform to the norms by which they are governed, it said.

“Unfortunately, the diverse and unseen group of flat buyers suffers the impact of the unholy nexus between builders and planners. Their quality of life is affected the most.

"Yet, confronted with the economic might of developers and the might of legal authority wielded by planning bodies, the few who raise their voices have to pursue a long and expensive battle for rights with little certainty of outcomes,” the bench said.

The top court in its 140-page verdict said, “as this case demonstrates, they (home buyers) are denied access to information and are victims of misinformation. Hence, the law must step in to protect their legitimate concerns”.

In 2012, the home buyers have first taken up their battle against the builder to Allahabad high court, which on April 11, 2014, ordered demolition of the under-construction twin- towers while upholding the rights of residents. The builder, just after a month approached the top court, which ordered a status quo on the demolition and creation of third party rights.

The top court on Tuesday directed that the work of demolition shall be carried out within a period of three months from the date of this judgment.

The apex court directed that the entire amount of home buyers be refunded with 12 percent interest from the time of the booking and the Residents Welfare Association be paid Rs 2 crore for the harassment caused due to the construction of the twin towers.

The top court said, “The record of this case is replete with instances which highlight the collusion between the officers of Noida with the appellant and its management. The case has revealed a nefarious complicity of the planning authority in the violation by the developer of the provisions of law”.

Noida 's referral of RWA's request to access the sanctioned plans to the appellant (Supertech Ltd) to seek its consent and upon the latter's refusal, a continuous failure to disclose them to the RWA, is one of such instances, it said.

It added that even when the Chief Fire Officer addressed a communication to Noida with regard to the violation of the minimum distance requirements in Emerald Court; it evinced no response and no investigation from the authority.

Noida made no effort to ensure compliance of the UP Apartments Act 2010, as a result of which the rights of the flat purchasers have been "brazenly violated", it said.

"This cannot point to any conclusion, other than the collusion between Noida and the appellant to avoid complying with the provisions of the applicable statutes and regulations for monetary gain, at the cost of the rights of the flat purchasers", the top court said. "Hence, illegal construction has to be dealt with strictly to ensure compliance with the rule of law".

The two towers, Apex and Ceyane of Emerald Court Project of Supertech situated in sector 93A of Noida, together have 915 apartments and 21 shops. Of these, 633 flats were booked initially.

The builder had said that out of 633 people booking the flats initially, 133 have moved out to other projects, 248 have taken refunds and 252 home buyers still had bookings in the project.