Republican presidential candidate Donald Trump is a fraud, a liar and a hypocrite, top Democratic leaders and speakers at the party's national convention said as they lashed out at the billionaire from New York. 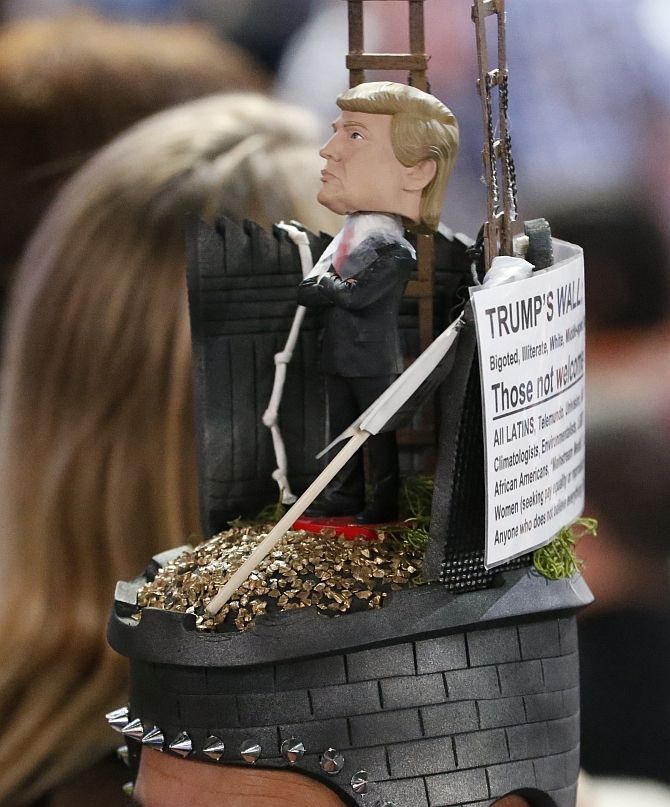 Former CIA chief and Defence Secretary Leon Panetta lambasted Trump for encouraging Russia to find Hillary Clinton's missing emails -- a move seen as sanctioning cyber spying by a foreign power, saying such a man cannot be the commander-in-chief of the US.

"As someone who was responsible for protecting our nation from cyberattacks, it is inconceivable to me that any presidential candidate would be this irresponsible. Donald Trump cannot become our commander-in-chief," Panetta said in his address to the Democratic National Convention in Philadelphia.

Arguing that this was no time to roll the dice and gamble with America's national security, Panetta said in an unstable world, the country cannot afford unstable leadership.

"We cannot afford who believes America should withdraw from the world, threatens our international treaties, and violate our moral principles. We cannot afford an erratic on our nuclear weapons," Panetta said in his address. 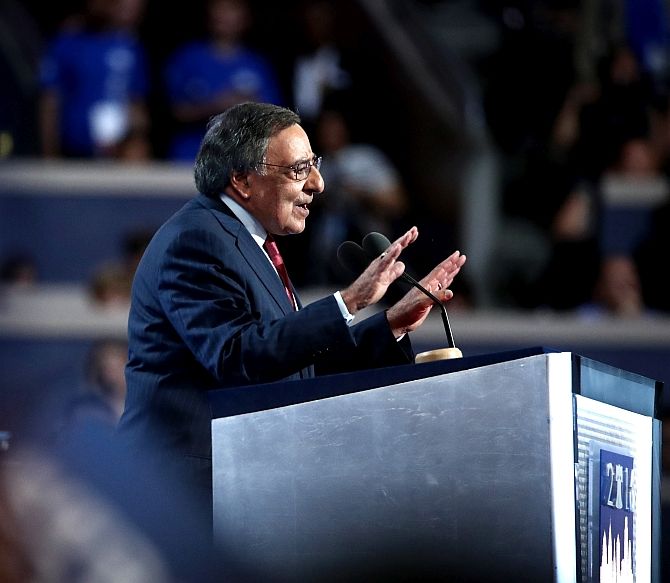 Former Secretary of Defense Leon Panetta attempts to quiet the crowd during his speech on the third day of the Democratic National Convention at the Wells Fargo Center. Photograph: Jessica Kourkounis/Getty Images

"He asked the Russians to engage in American politics. Think about that for a moment. Donald Trump is asking one of our adversaries to engage in hacking or intelligence efforts against the United States to affect our election," he said.

Referring to Trump's comments that he gets his foreign policy from watching TV and running the Miss Universe Pageant, Panetta said the situation was deadly serious. "Donald Trump asks our troops to commit wars, endorse torture, spurns allies from Europe to Asia, suggests more countries to have nuclear weapons, and praise dictators from Saddam Hussein to Vladimir Putin," he said.

Panetta said Hillary is determined to defeat those who threaten the United States – be it Al Qaeda, ISIS, Boko Haram, or al-Shabab.

"Terrorists who pervert the teachings of Islam to kill innocent people going about their daily lives, people travelling through airports in Brussels and Istanbul...These murderers must be stopped," he said.

He said Clinton is the only candidate who has laid a comprehensive plan to defeat and destroy ISIS and keep America safe. "She is smart. She is principled. She is tough and she is ready. Hillary is the single most experienced and prepared person who has ever run for president." 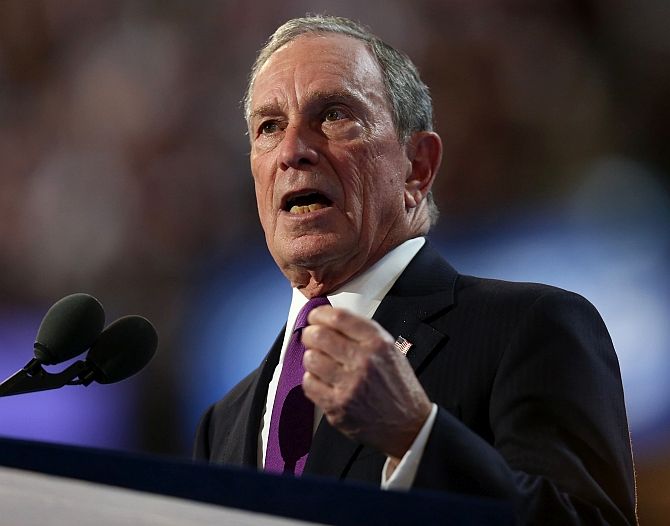 Raising questions on Trump's business acumen, former New York mayor Michael Bloomberg said: "I am a New Yorker, and I know a con when I see one!" to loud cheers from the audience.

"Trump says he will punish manufacturers that move to Mexico or China, but the clothes he sells are made overseas in low-wage factories. He says he wants to put Americans back to work, but he games the US visa system so he can hire temporary foreign workers at low wage. He says he wants to deport 11 million undocumented people, but he seems to have no problem in hiring them," Bloomberg said.

The former New York Mayor said that though Hillary Clinton may not be the "perfect candidate", there is "no doubt" in his mind that she is the right choice. 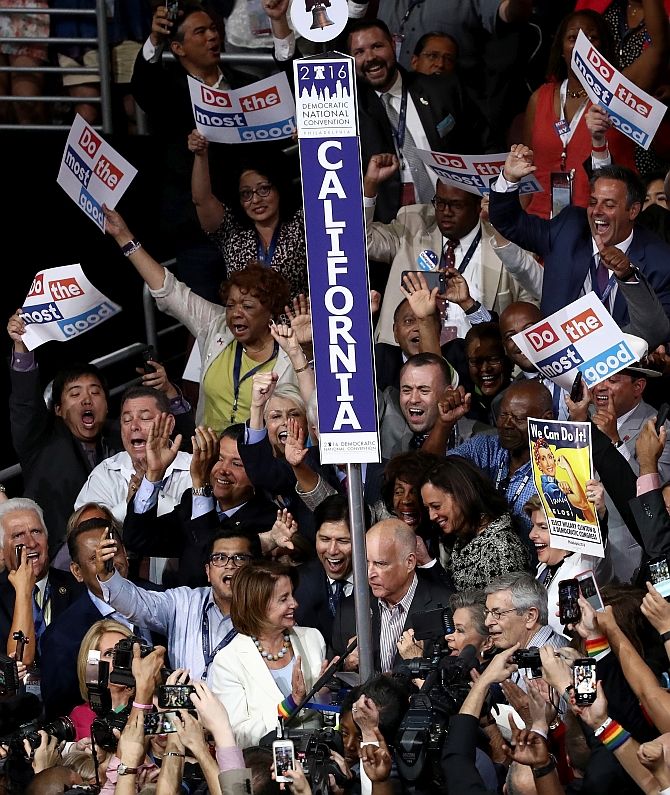 California Governor Jerry Brown also laid into Trump, calling him a fraud and a liar.

"Trump says global warming is a hoax. I say Trump is a fraud. Trump says there's no drought in California. I say Trump lies. So, it's not surprising that Trump chose as his running mate a man who denies that there''s such a thing as evolution," he said.

Brown said while Trump only talks, Clinton gets things done.

"As Secretary of State, she paved the way for the historic Paris Climate Agreement, an agreement which 200 nations, including China and India, enthusiastically embraced. And Mr Trump, he says: The world be damned, I'm tearing it up," he said.

"Trump and those who live in climate denial say otherwise. They tell us we have to choose between saving the economy and saving the planet. Donald Trump and the climate deniers are dead wrong — dangerously wrong," Brown said. 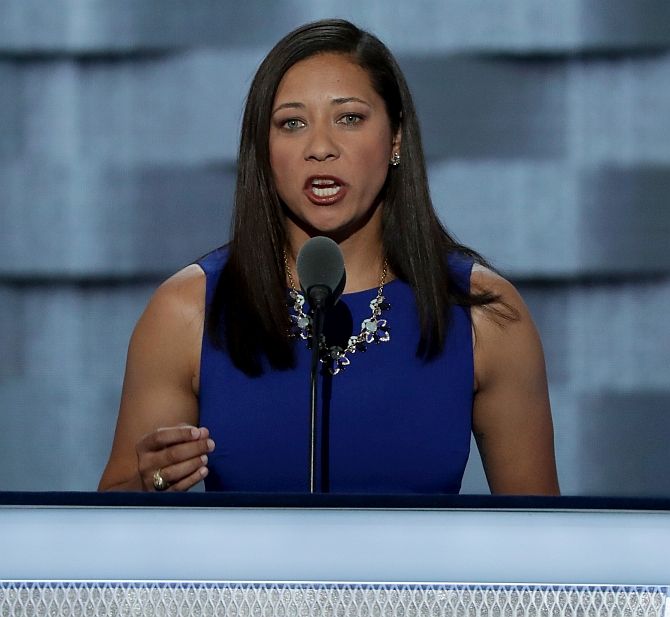 Kristen Kavanaugh, co-founder of the Military Acceptance Project, said Clinton understands the importance of a strong military and diplomacy.

"She knows we're stronger when we work with our allies to keep us safe, and she has a specific plan to defeat and destroy ISIS. She has the experience, temperament, and steady hand to lead," she said.

"I don't trust Donald Trump. The military is defined by discipline. Leadership. Integrity. Those are the qualities that drew me to serve. And those are the very qualities that Donald Trump lacks. He suggests abandoning our closest allies. He praises dictators who've killed Americans. He says we should allow more countries to get nuclear weapons," Kavanaugh said. 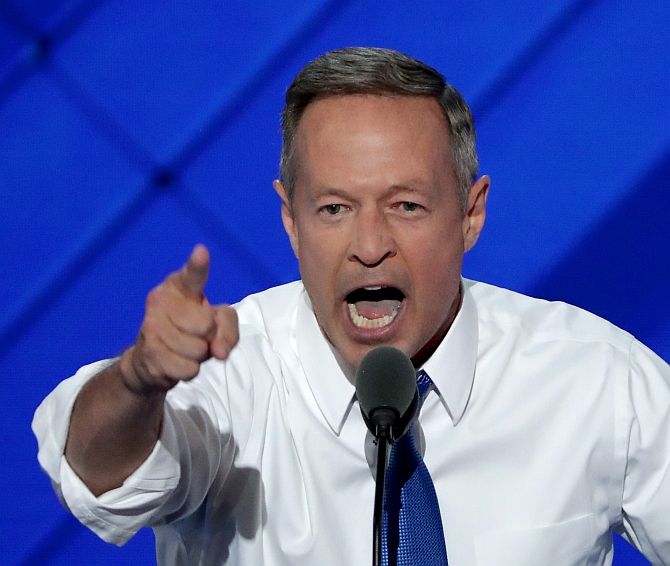 Former Maryland governor Martin O'Malley lashed out at Trump saying he has been a bully his whole life.

"But here's what I learned on playgrounds in Catholic school: all bullies are cowards in disguise. But unlike that immigrant-bashing, carnival barker, Donald Trump, Hillary Clinton actually knows the enduring symbol of America is not a barbed wire fence. It is the Statue of Liberty!" he said.

"Donald Trump doesn't believe in science. He says, 'the concept of global warming was created by and for the Chinese.' If the Chinese were really capable of designing some kind of diabolical farce to hurt America, they wouldn't invent global warming. They'd invent Donald Trump," he said.

He said Trump insults people who disagree with him and makes his followers fearful. "He feeds off of a deep-seated and dangerous anger." 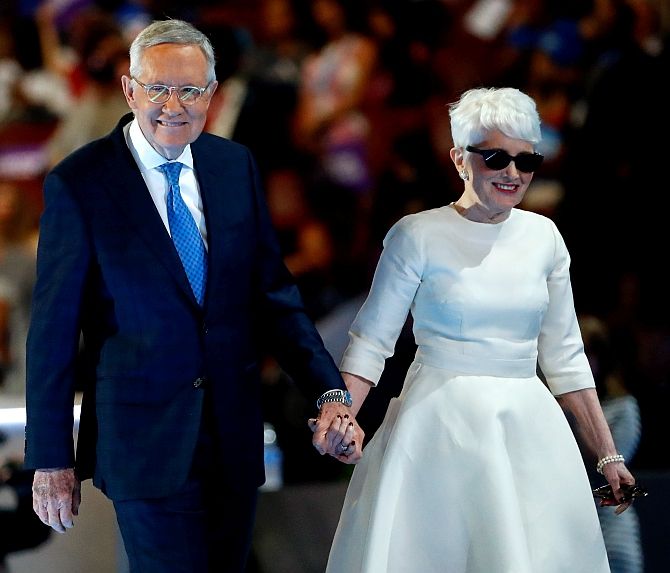 Former Secretary of Defense Leon Panetta attempts to quiet the crowd during his speech on the third day of the Democratic National Convention at the Wells Fargo Center. Photograph: Jessica Kourkounis/Getty Images

Senate Majority Leader Harry Reid said: "When Trump decided to run for President, he probably said to himself: I'm an egomaniac. I don't believe in science. I think women are inferior. Where would I feel at home?"

"He lies about donating to our veterans and called the military I served in a disaster'. It's embarrassing enough that he's the face of one of our political parties. The real disaster is what would happen if we let Donald Trump become the face of the country we love," he said.