Democracy has capacity to reconcile all differences: Prez in Kashmir

President Ram Nath Kovind asserted on Tuesday that democracy has the capacity to reconcile all differences and bring out the best of the citizens' potential, saying Kashmir is 'happily' realising this vision. 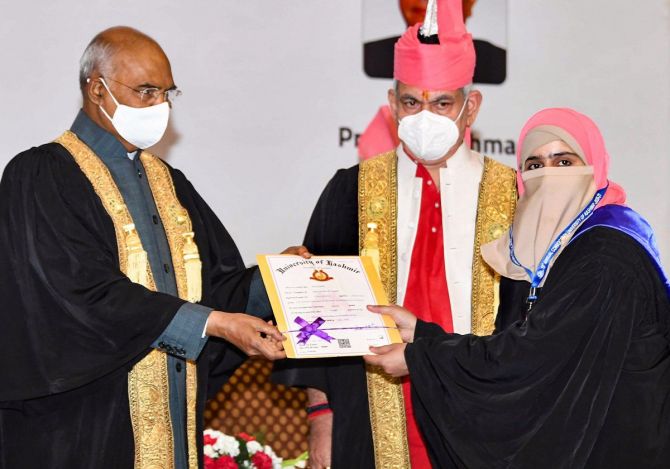 "Democracy, I firmly believe, has within it the capacity to reconcile all differences and also the capacity to bring out the best of the citizens' potential. Kashmir, happily, is already realising this vision," the President said in his convocation address at the Kashmir University in Srinagar.

Kovind, who is on a four-day visit to Jammu and Kashmir, said violence was never part of 'Kashmiriyat', but became a daily reality.

"It was most unfortunate that this outstanding tradition of peaceful coexistence was broken. Violence, which was never part of Kashmiriyat, became a daily reality.

"It (violence) is alien to Kashmiri culture and it can only be termed as an aberration, a temporary one, much like a virus that attacks the body and needs to be purged. Now there is a new beginning and determined efforts to regain this land's lost glory," he said.

The president said Kashmir is the meeting point of various cultures and it is impossible to write a history of Indian philosophy without referring to the region's contributions to it.

"One of the oldest manuscripts of the Rigveda was written in Kashmir. This is the most conducive region for philosophies to prosper.

"In medieval times, it was Lal Ded who showed the way to bring together various spiritual traditions. In the works of Lalleshwari, you can see how Kashmir provides the template of communal harmony and peaceful coexistence," he said, referring to Kashmir's revered poetess.

Kovind said almost all religions that came to Kashmir embraced the unique feature of 'Kashmiriyat' that shunned orthodoxy and encouraged tolerance and mutual acceptance among communities.

"I take this opportunity to urge upon the younger generation of Kashmir to learn from their rich legacy. They have every reason to know that Kashmir has always been a beacon of hope for the rest of India.

"Its spiritual and cultural influence has left an imprint all across India," he added.

The president expressed confidence that the youngsters and the women of Kashmir will use democracy to build a peaceful and prosperous future.

"Democracy lets you build your own future, a peaceful and prosperous tomorrow. The youth and women especially have high stakes in it, and I am sure they will not let go of this opportunity to rebuild lives and rebuild Kashmir," he said.

Kovind said as Kashmir has turned a new leaf, exciting new possibilities are opening up.

"The whole of India is watching you with admiration and pride. Kashmiri youngsters are scaling new heights in a variety of sectors, from the civil services exams to sports and entrepreneurial ventures.

"In September last year, during a consultation on the new National Education Policy, I had spoken of my dream. I wish to see Kashmir as a paradise on earth," he said.

The president said he is banking on the younger generation of Jammu and Kashmir for the restoration of Kashmir to its rightful place as the crowning glory of the country.

"I am squarely banking on the younger generation of Jammu and Kashmir to realise this dream, which I am sure will come true sooner than later. Kashmir is bound to acquire its rightful place as the crowning glory of India," he said.

Kovind said he was delighted to be in the land of great historical and cultural significance.

It has been called 'Rishi Vaer' or the land of seers and has always attracted spirituality seekers from far and wide, he said, adding, "I feel blessed standing on this land, which is not only a reservoir of wisdom but is also endowed with unparalleled natural beauty," he said.

The President said close to three lakh students would receive their degrees on Tuesday.

"With more than 2.5 lakh bachelor degree holders and over 1,000 doctorates in the last eight years, the university has made remarkable progress," he added.

Prez interacts with soldiers in Kashmir

The President also interacted with soldiers at the headquarters of the army's 15 Corps in Srinagar and lauded them for fighting terrorism and maintaining peace in Jammu and Kashmir.

He also appreciated the high morale of the troops and their exceptional courage and professionalism.

'President Kovind visited HQ of 15 Corps in Srinagar. The President interacted with the troops and complimented them for maintaining peace, fighting terrorists and safeguarding borders,' the President's office tweeted.

He appreciated women officers for serving the nation in various capacities in the armed forces, it said.

In a message in the visitor's book, Kovind said that he was pleased to know about the tradition of the 15 Corps in effectively fighting against anti-national and anti-social elements while safeguarding country's borders.

They have maintained high morale amid sustained challenges and have demonstrated exceptional courage and professionalism while discharging their national duties, the president wrote.

'I express my best compliments to all the soldiers and officers for their extraordinary service to the nation,' he wrote in the visitor's book.