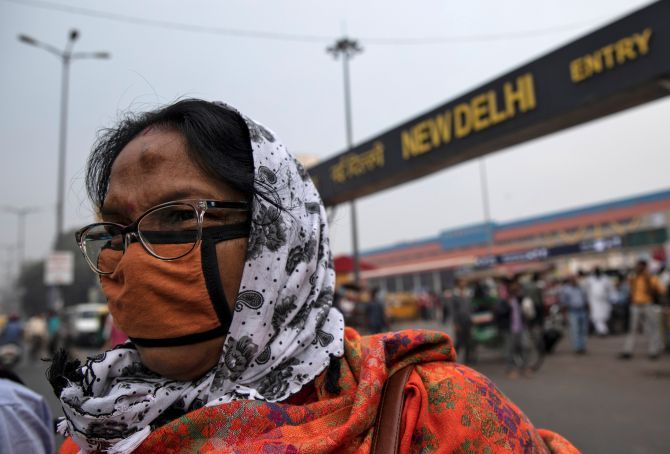 IMAGE: A woman wearing a mask crosses a traffic junction on a smoggy morning in New Delhi on Thursday. Photograph: Danish Siddiqui/Reuters

After a brief relief, the national capital's air quality plunged to the 'very poor' category again on Thursday because of high humidity due to light rain, officials said.

Delhi had been breathing relatively less polluted air for three days after a bright sun and improved wind speed pulled the city out of the grip of a dense haze that had been lingering over it since October 29. But the increased humidity on Thursday pushed the pollution levels up.

On Sunday, too, a drizzle resulted in an increase in humidity, triggering a massive pollution spike.

Secondary particles are products of complicated atmospheric reactions between primary particles, such as particulate matter, sulphur dioxide and nitrogen dioxide directly emitted by stubble burning and vehicles, in the presence of other factors such as sunlight and moisture.

Gufran Beig, the head of the government's air quality monitoring and forecasting service SAFAR, said scanty rain in cold weather is always harmful as it leads to high humidity which, in turn, creates secondary particulate matter.

However, the weather experts said, Haryana and Punjab received good rainfall which will reduce the impact of stubble burning in Delhi's pollution.

Mahesh Pawalat, a senior scientist at Skymet Weather -- a private forecaster, said, "We are expecting cold, dry winds to blow from Jammu and Kashmir and Himachal Pradesh due to snowfall. Dry winds will reduce humidity. The air quality will start improving again after 24 hours."

Kuldeep Srivastava, the head of the Regional Weather Forecasting Centre, said, "Light rainfall increases moisture content and water droplets suspended in the air make pollutants heavier which do not get dispersed easily even a with moderate wind speed."

"On Wednesday, the visibility is likely reduce due to fog, but the situation will improve during the day. The cloud cover will dissipate and there will be sunlight which is crucial for improvement in air quality," he said.

A SAFAR report said around 3,500 farm fires were recorded on Wednesday in neighbouring states, but 'the wind direction is not favourable for any stubble fire plume intrusion'.

It said the share of stubble burning in Delhi's PM2.5 pollution on Thursday reduced to just 2 per cent as easterly and south easterly winds negated its impact. It is likely to be 3 per cent on Friday.

A change in the wind direction (to north-westerly) and plume intrusion is expected only on Saturday which may lead to a marginal deterioration of air quality, SAFAR said.

Meanwhile, the South Delhi Municipal Corporation suspended two officials and as many sanitation workers on Thursday for alleged negligence of duties in carrying out activities meant for curbing pollution, officials said.

The authorities have also sought explanation from three assistant sanitary inspectors (ASIs) as to why action should not be taken against them for not properly discharging their duties. 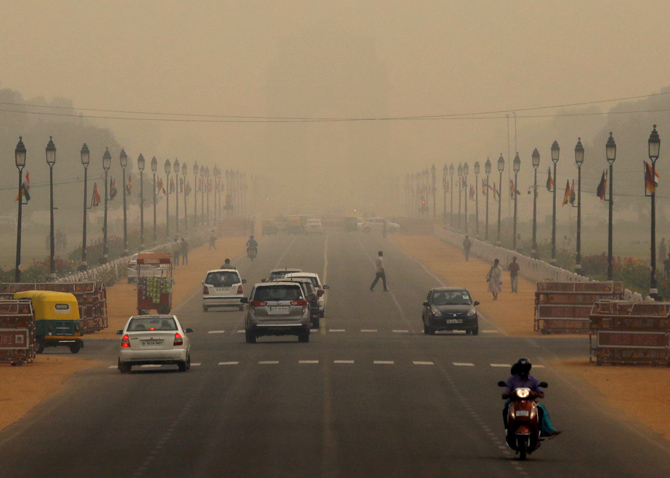