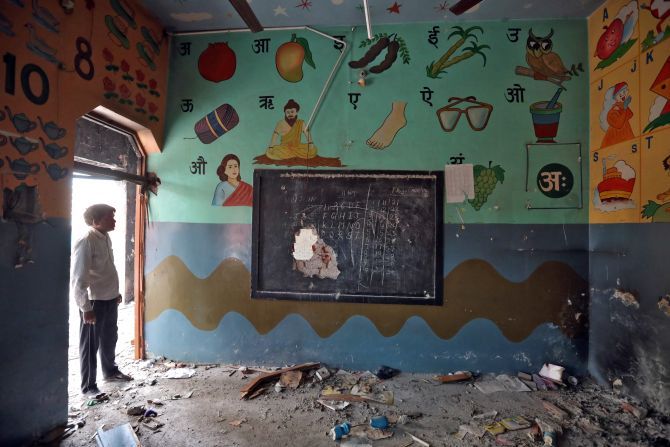 'Welcome to a very happy school' reads a half-charred board at a private school in Brijpuri area of North East Delhi which is now home to broken desks and burnt books after it was vandalised during the violence.

Arun Modern Senior Secondary School, which is over 32 years old, looks no less than a cemetery, say officials, who claim the damage is estimated to be over Rs 70 lakh.

"While I am yet to recover from what has happened at the school, my biggest relief is that children were not in the premises when this happened.

"I do not even want to imagine what would have happened if that was the case," school principal Jyoti Rani told PTI.

"Our security guard was there on Tuesday evening when a mob entered the premises. Scared by the happenings, he rushed outside to save his life.

"Only two days later, we could gather the courage to go to the school and all I could see was vandalised desks, burnt books in library and a mess everywhere. It looks no less than a cemetery now," she added.

Bhisham Sharma, a former MLA and owner of the school, said the rioters burnt books worth Rs 70 lakh.

"The school has been running since 1987. The incident happened around 5 pm on Tuesday. They came and burnt down everything. We have lost records of 30 years.

"The only thing we are thankful is that there were no children at that time in the school, otherwise the loss would have been huge," he said. 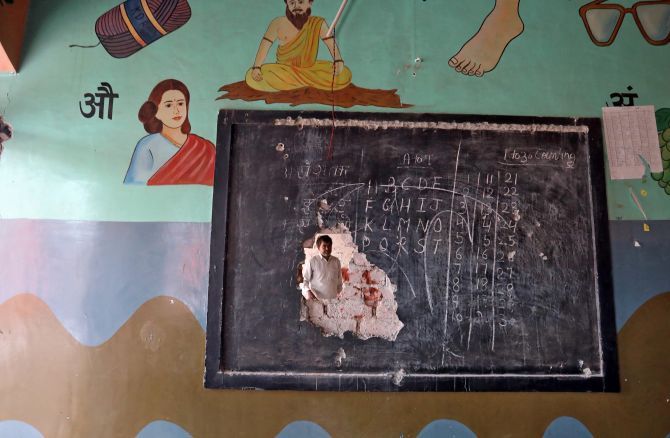 "Two buses of the school have been burnt. Calls were made to the police and fire brigade, but there was no response. The fire tenders arrived only on Wednesday.

"The firemen told us they could not have come without the police escorting them since they were also being attacked and their vehicles vandalised," Sharma added.

Shaheen, parent of a class 7 student of the school said, "Why did the rioters have to burn down a school which educates children? They are burning everything else and could have spared schools. What about the children who are awaiting their final exams? Their year-long effort will go waste."

At Rajdhani Public School in Shiv Vihar, few student bags, crayons strewn over, half-burnt models that were part of a recently held exhibition and cut outs from the Republic Day celebrations last month, are among the remains while the entire library has been burnt.

Security guard Pawan Susheel said, "Kindergarten students at times leave their bags in schools. No student has been hurt. This (the violence) did not happen in school hours. I came today only." 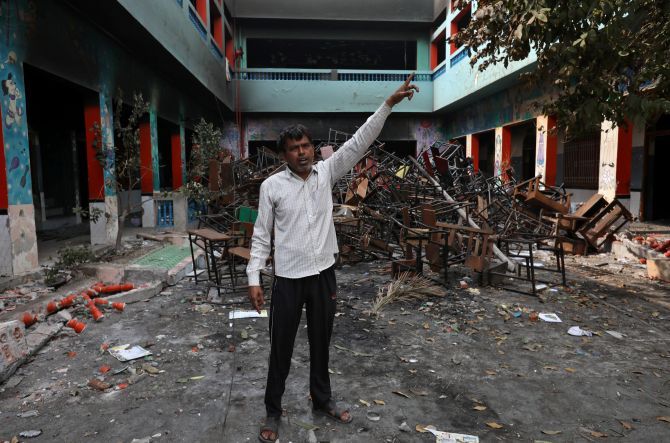 Manoj Chandra, caretaker of the school said, "The rioters came around 3 pm. They had lathis and swords with them and may have been 100-200 in number.

"They barged through the main gate, some of them climbed the terrace. Me, my wife and our two kids were present at the school. We ran from the back door to save ourselves.

"We do not know what they did to the school, but when we came back here yesterday, we saw that the reception area was burnt and the entire school had been vandalised," he said.

Similar heart-wrenching scenes can be witnessed in the DPR School in the same area. Nobody was present in the premises.

The main gate of the school has been damaged making it easy for anybody to enter inside.

The school has been ravaged beyond recognition as the air filled with a burning smell makes you nauseating when you enter its compound.

Meanwhile, Chief Minister Arvind Kejriwal announced that children who have lost their books and uniforms in the violence, will be provided the same free of cost.

"The Directorate of Education shall provide books and notebooks free of cost to children of both government and private schools. 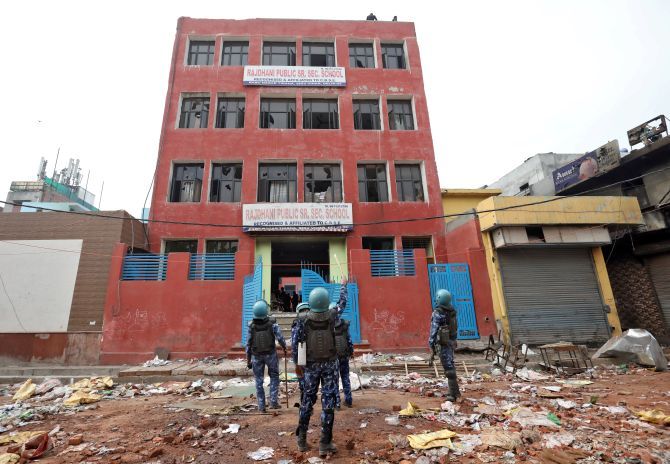 "The disbursement will take place from the respective schools. Similarly, new set of uniforms shall also be provided free of cost," he said on Thursday.

Schools have been closed in North East Delhi and East Delhi for three consecutive days, while the CBSE has postponed board exams in the area scheduled till February 29.

IMAGES: A school attacked by a mob in a riot affected area in New Delhi. Photographs: Rupak De Chowdhuri/Reuters
Gunjan Sharma and Saloni Bhatia
© Copyright 2021 PTI. All rights reserved. Republication or redistribution of PTI content, including by framing or similar means, is expressly prohibited without the prior written consent.