Annihilated in Delhi polls, a shocked Congress on Tuesday promised to "reinvent" itself and revisit its ‘idealogical construct’. 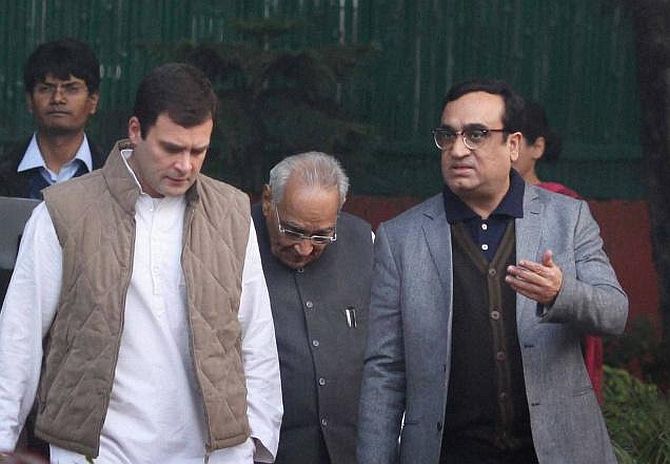 The party's face for the polls Ajay Maken resigned owning moral responsibility for the defeat while a senior party leader suggested that internal dissension was also one of the reasons for the total decimation of the party in Delhi.

Insulating Rahul Gandhi from the blame for the defeat, Maken, who was the campaign committee chief of the party, said that the election was fought on local issues.

At the same time, he also appeared placing a portion of the blame at former chief minister Sheila Dikshit's door saying that people questioned Congress as to why it did not fulfil the promises made now when it was in power in Delhi for last 15 years.

Dikshit and Maken are not on the very best of terms.

Asked about the way out for the Congress as people have rejected the party with a new face this time as well after voting out three-term chief minister Sheila Dikshit in the last assembly polls, he said that the result is a "continuation of 2013 mandate" and it's

more an "affirmation for AAP" than "rejection of any other party".

"Whenever we went to people with our manifesto promises like cheap electricity and right to shelter, people questioned why did you not do in last 15 years? We have to rebuild that credibility among people... We will re-invent the party," he said.

Congress leader Manish Tewari said the poll outcome could have been different had all the leaders participated in the election campaign.

"If collectively everybody would have been pitched into the campaign, it would have possibly made a difference," Tewari said.

He also clarified that the setback for the Congress could not be attributed to individuals and favoured revisiting the idealogical construct.

"That calls for a serious introspection on how get back the left to the centre space," he added.

Congress led by Sheila Dikshit had ruled for 15 consecutive years in Delhi till 2013 state polls, which threw a hung verdict with Congress winning only eight seats. In this election, the party has lost in all those seats as well.
© Copyright 2021 PTI. All rights reserved. Republication or redistribution of PTI content, including by framing or similar means, is expressly prohibited without the prior written consent.