Saluting the people of Delhi for doing a "wonder" in Delhi elections by giving them a landslide victory, AAP chief Arvind Kejriwal has asked party workers not to get carried away by the mandate and not become "arrogant".

"You have done a wonder. When you are on the path of truth, all the forces of universe come together to help you. I salute the people of Delhi. It's a victory of truth," the 46-year-old former Delhi chief minister said in his first reaction to the Delhi poll outcome.

The party is on course to make history as it was ahead in 66 seats out of 70 in the Delhi assembly.

"I would like to urge all of you not to be arrogant. Otherwise we will meet the same fate five years down the line. We have to serve people of Delhi as they have given such a massive mandate to us and we are grateful to them," Kejriwal told the cheering crowd of supporters.

Thanking his wife, who was standing next to him on the terrace of three-storeyed party office, Kejriwal said the victory would not have been possible without her constant support and understanding.

"She never comes in the picture but she is always there. It would not have been possible for me to achieve anything if she was not there," he said. The AAP chief also thanked his parents for supporting him.

besides Kejriwal, said the mandate was the beginning of a new kind of revolutionary politics in the country.

"No other party has got such respect in the history. It is a huge responsibility on us," he told reporters.

He said people were fed up with the earlier politics and wanted to give a chance to the clean and progressive politics.

"...I hope when the government is formed, there is a positive competition between the centre and the state government, there is healthy politics," Sisodia added.

Another leader Sanjay Singh, while dedicating the party's success to its workers, said it was a mandate against "ignorant, offensive and negative politics".

Asserting that "We will not leave our decency," he told an exuberant crowd of supporters, "Even after our victory we have to remain humble and unified. We are not going to indulge in teasing or letting others down. We have led our campaign in a humble manner and will continue doing so."

Striking a similar note, another leader Ashish Khetan, a key strategist behind the party's dramatic turnaround, said the party will work on "every single point promised in its manifesto". 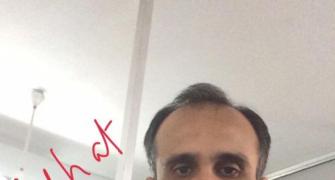 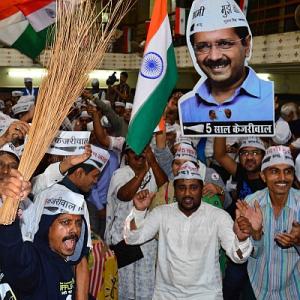