Battered by hot and dry westerly winds, Delhi may see the ongoing heatwave spell peak on Sunday with the maximum temperature predicted to settle above 46 degrees Celsius in many areas, weather forecasters said. 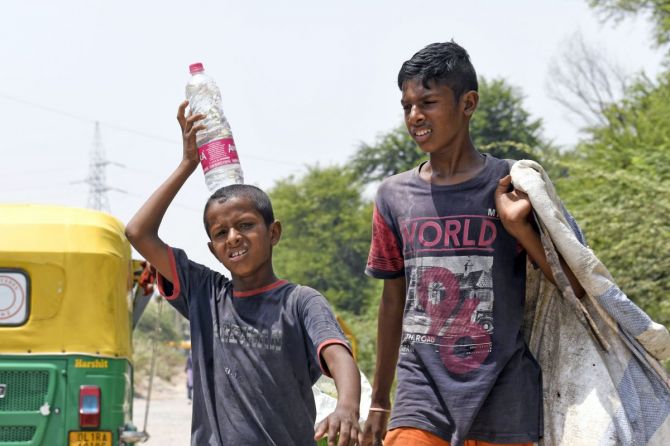 The maximum temperature at the Safdarjung Observatory, Delhi's base station, is likely to rise to 45 degrees Celsius.

The primary weather station had recorded a maximum temperature of 44.2 degrees Celsius on Saturday, which was the highest this year so far.

Weather forecasters said the heatwave spell would worsen on Sunday.

"Hot and dry westerly winds sweeping the Delhi-NCR region will push the maximum further up. It is likely to hit the 45-degree mark at Safdarjung on Sunday," said Mahesh Palawat, Vice President (Meteorology and Climate Change), Skymet, a private weather forecasting agency.

An 'orange' alert has been issued to caution people about a severe heatwave.

It said the heatwave could lead to 'moderate' health concerns for vulnerable people -- infants, elderly, people with chronic diseases -- in affected areas.

'Hence people of these regions should avoid heat exposure, wear lightweight, light-coloured, loose, cotton clothes and cover the head by use of cloth, hat or umbrella etc,' the Met office said.

'A cyclonic circulation over Punjab and Haryana will induce pre-monsoon activity which will provide some relief from the intense heat on Monday and Tuesday,' Palawat said.

The IMD said a thunderstorm or a dust storm is likely in the national capital on Monday.

With scanty rains owing to feeble Western Disturbances, Delhi had recorded its second hottest April this year since 1951 with a monthly average maximum temperature of 40.2 degrees Celsius.

A heatwave at the end of that month had sent the maximum soaring to 46 and 47 degrees Celsius in several parts of New Delhi.

Delhi received a minuscule 0.3 mm of rainfall in April against a monthly average of 12.2 mm.

March saw no rainfall against a normal of 15.9 mm.

The IMD had predicted above-normal temperatures in May.

A heatwave is declared when the maximum temperature is over 40 degrees Celsius and at least 4.5 notches above the normal.

A severe heatwave is declared if the departure from normal temperature is more than 6.4 notches, according to the IMD.