Source: PTI
October 21, 2011 18:30 IST
The Delhi high court on Friday rapped the city police for being "lax" while filing the chargesheet against underworld don Abu Salem under Maharashtra Control of Organised Crime Act when it was in "contravention" of the extradition agreement with Portugal.

Additional Solicitor General Haren Rawal, appearing for police, sought early hearing of the Delhi police plea seeking to withdraw charges under MCOCA against Salem, saying, "Otherwise the extradition of the accused would be in jeopardy."

The plea has been filed in the backdrop of a major embarrassment to the Centre after a Portuguese high court recently revoked Salem's extradition in New Delhi on the ground that the terms of extradition agreement, executed by India and Portugal, have been breached. "Why was the state lax when the chargesheet against Salem was filed under MCOCA and charges were framed in contravention of the extradition agreement. You are trying to take advantage of your own wrong," Justice V K Shali said while issuing a notice to extradited gangster Salem, lodged at Arthur Road jail in Mumbai.

Justice Shali, who has now fixed the hearing on November 8, said, "You gave an assurance to other requested foreign state and remain lax in your approach with the hope that it will be regularised. Once the matter is decided by the Supreme Court in Portugal then the hearing here would become needless," the ASG said.

Salem, extradited from Portugal in 2005, was booked under MCOCA for allegedly making extortion calls to a Delhi-based businessman Ashok Gupta in 2002 demanding Rs 5 crore as protection money.

During the hearing, Justice Shali asked the ASG as to whether the public prosecutor brought the fact to the notice of the lower court that Salem cannot be prosecuted under MCOCA.

"The prosecutor did apply his independent mind," the ASG said and referred to the terms of extradition to drive home the point that anomaly in the order needed to be rectified.

When the accused was charged under the provisions of the MCOCA in contravention of the extradition agreement, the state should have taken a "contemporaneous approach to handle the situation then," the court said.

The high court, meanwhile, stayed the trial of Salem in the extortion case and asked the ASG to file a short synopsis on the issue.

Earlier, the lower court, in 2009, dismissed the plea of police seeking to withdraw charges under MCOCA against Salem. Aggrieved by the order, Salem approached the high courts at Delhi and in Portugal.

A three-judge bench of the Lisbon high court recently allowed the plea of Salem, being tried in eight criminal cases including the 1993 Mumbai serial blasts that he be sent back to Portugal as the Indian authorities breached extradition terms.

Salem was extradited on November 11, 2005, following a three-year-long legal process in Portugal after the then National Democratic Alliance government had given an executive assurance to Portugal that he would be tried only in eight cases and will not be awarded imprisonment exceeding 25 years. It had also vowed that the gangster would not be tried under any special law. 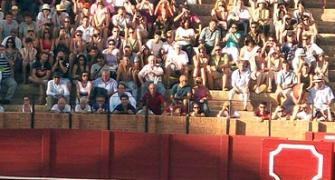