Citing the nature and gravity of the offences alleged against the accused, a Delhi court on Saturday dismissed the bail plea of Alt News co-founder Mohammed Zubair and sent him to 14-day judicial custody, but not before high drama involving a senior Delhi Police officer over the outcome of the petition erupted outside the courtroom. 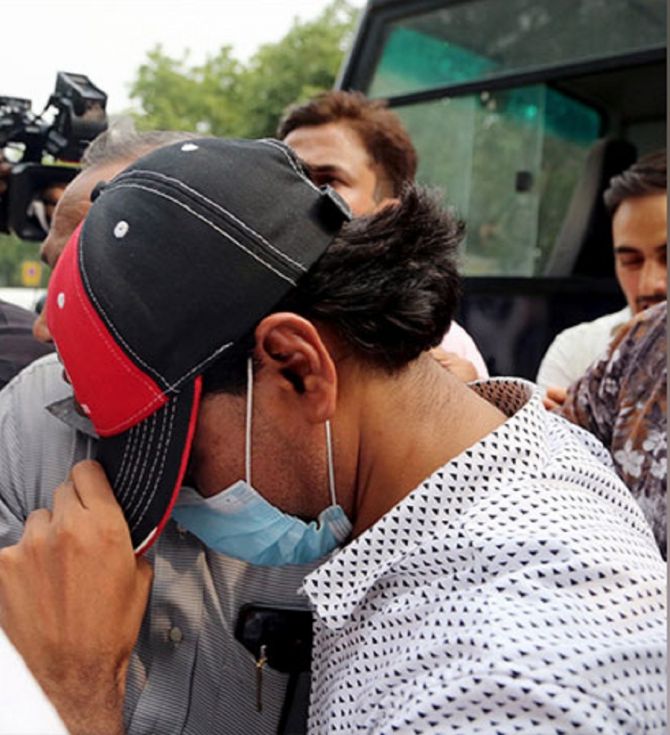 The case in which Zubair is an accused is related to an alleged objectionable tweet he had posted in 2018 against a Hindu deity, even as the Delhi police invoked new provisions -- sections 120B (criminal conspiracy) and 201 (destruction of evidence) of the Indian Penal Code(IPC) and section 35 of the Foreign Contribution (Regulation) Act -- against Zubair.

During the hearing, public prosecutor Atul Srivastava alleged that the accused accepted money through Razorpay payment gateway from Pakistan, Syria and other countries, which requires further investigation.

Advocate Vrinda Grover, appearing for the accused, moved a bail application before the court on the ground that her client was not required for the investigation any further and said, "I (Zubair) am not some terrorist that they need to secure my presence".

The Delhi police had egg on its face after KPS Malhotra, deputy commissioner of police (Intelligence Fusion and Strategic Operations), was forced to admit he had incorrectly informed the media earlier in the day that Zubair was sent to 14-day judicial custody when the lawyer of the journalist of the fact-checking website emphatically said the judge has not given any order yet.

Chief Metropolitan Magistrate Snigdha Sarvaria pronounced the judgement after the proceedings in the open court were reconvened late in the evening.

Dismissing the bail plea, she observed that the matter is at the initial stage of investigation.

The judge had reserved the order after the hearing of arguments.

"Since the matter is at the initial stage of investigation and considering overall facts and circumstances of the case and nature and gravity of the offences alleged against the accused, no ground for grant of bail is made out. Bail application of accused is accordingly dismissed. Accordingly, accused is remanded to judicial custody for 14 days," the judge said in the eight-page order.

The judge considered addition of new sections during the course of investigation while rejecting the bail application.

On arguments that the seizure of laptop and mobile phone were illegal and affecting the privacy of the accused, the court observed that it was part of the police file that the mobile phone seized from the accused initially on June 27 was found to be having no data.

In response to the accused's claim that his previous mobile was stolen, the court said, "Nothing was found on record to show that any mobile phone of the accused was lost, although said plea has been taken now in the present application."

The court further said the accused's concern about sealing of electronic devices could not be decided at the present stage since the investigation regarding the data is at the initial stage and the electronic devices seized during execution of search warrants are still being looked into.

"As regards the plea that the alleged tweet of the accused for which accused has been arrested is of the year 2018 and part of Hindi movie 'Kissi Se Na Kehna' and so offences under sections 153A (Promoting enmity between different groups on grounds of religion, race, place of birth, residence, language, etc.) and 295A (deliberate and malicious acts, intended to outrage religious feelings of any class by insulting its religion or religious beliefs) IPC are not made out, are of no assistance to the accused as Section 35 (Punishment for contravention of any provision of the) FC(R) Act have also been added and investigation qua it is also pending," it said.

The accused be produced before the court concerned or duty metropolitan magistrate on July 16, the judge said.

The lawyer for the journalist expressed shock over 'leak' of news of the rejection of his bail plea when the court was yet to pronounce its order.

"I am shocked to see that DCP KPS Malhotra has leaked in the media ki 'hamara bail reject ho gaya hai. Aur 14 din ka JC grant hui hai' (that my bail plea has been rejected and my judicial custody has been granted for 14 days). I have learnt this from the twitter posts of news channels and some law reporters. They all cited KPS Malhotra as source," Soutik Banerjee told reporters outside the courtroom.

"It is extremely scandalous and it speaks of the status of rule of law in our country today. That even before the judicial magistrate has sat and pronounced the order, the police have leaked the order to the media. How KPS Malhotra knows what the order is. This calls for serious, serious introspection," he added.

"I had a word with my IO (investigating officer), I misheard it due to noise and inadvertently the message was posted in the broadcast," he said in a WhatsApp message to reporters.

Grover opposed the police plea seeking judicial custody and said, "We are not living in police state. Till they demonstrate a prima facie case, if it's made out, I'll submit to law. But if they don't, it's not a police state."

"I (Zubair) am making a statement I was not taking the money. It was the company," the counsel said, in response to the prosecution allegations.

The court was misled when told that the accused has received foreign contributions, she claimed.

"Alt News runs under a company under sec 8. They are saying I am a journalist, I cannot receive FCRA. This is to the company, not to me. It hasn't gone into my account. I am making a categorical statement."

Grover further submitted that the phone seized by the police was not of the time when the tweets were made.

"Tweet is of 2018, the phone is which I (Zubair) am using presently. I haven't even denied the tweet," she said.

Grover claimed that the entire exercise was malafide in nature and was a non- prosecutable action of FIR, which started from a story of four-year-old tweet.

She said there was a need of an enquiry into the person tweeting about Zubair's tweet and how it got picked for the complain, and reiterated that the reported picture used in the tweet in question by Zubair was from a scene in a 1983 Rishikesh Mukherjee film "Kissi Se Na Kehna."

"It's a very sweet comedy. A completely innocent comic scene made by a renowned director. Till this was pulled up saying that this was so sensitive that public tranquility will be disturbed. These tweets are still on Twitter. No direction on Twitter to pull it down. For 40 years this film has created no disturbance, and an anonymous account with one follower is creating all these mischief," she said.

She said it was a harmless clip.

"You have a problem with the film, sue CBFC. If we have lost any sense of humour then even penal code will not help us."

She added, "My tweet is an image of a film. I haven't said a word. My tweet doesn't refer to any religion or religious group. It doesn't say anything inciteful for any God."