Bharatiya Janata Party-ruled civic bodies in Delhi are set to be dissolved in the next five days, with the South Delhi Municipal Corporation's term set to end on Wednesday. 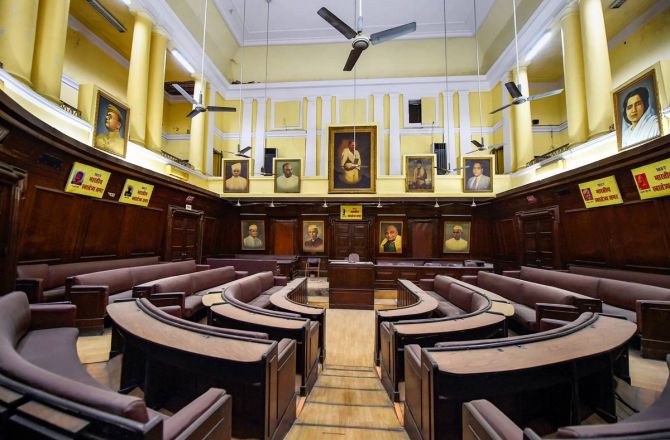 IMAGE: Portraits of freedom fighters inside the premises of the over 150-year-old Town Hall at Chandni Chowk in New Delhi, April 7, 2022. Photograph: Manvender Vashist/PTI Photo

According to the Delhi Municipal Corporation (Amendment) Act, 2022, the central government will appoint a "special officer" to run the new unified civic body until the first meeting of the corporation is held.

The other two civic bodies -- North Delhi Municipal Corporation  and East DMC -- will be completing their terms on May 19 and May 22, respectively.

A senior SDMC official said the exercises of the deliberative wing, which is formed by the elected representatives, will cease to operate from Wednesday but the civic body will keep functioning its obligatory duties.

"From tomorrow, there will no policy-making exercises in SDMC. Meetings of the SDMC house, standing committee will also not be carried out. The Union home ministry will issue a separate notification for dissolving the three civic bodies and unify them," the official told PTI requesting anonymity.

He said normal functions of the municipality such as sanitation exercise and health-related services among others will continue and be carried out by bureaucrats.

"After the three civic bodies are dissolved, the Union home ministry will appoint 'special officer' to the new unified body," he added.

SDMC's standing committee chairman BK Oberoi echoed similar views and said that in the absence of the elected representatives, the executive wing, which comprises bureaucrats and other officials in the municipality, will continue to function.

"Except for policy-making and meetings of different committees of elected representatives, the SDMC will keep discharging its functions normally. However, the public will find it difficult to get their works done as they generally approach the area councillor for any work," Oberoi said.

A legislation to unify the three civic bodies was approved by the Lok Sabha on March 30 and by the Rajya Sabha on April 5. The legislation had become an Act after President Ram Nath Kovind gave his assent to the bill on April 18.

The Act reduces the number of wards to 250 from the existing 272, which means that the Municipal Corporation of Delhi (MCD) will have to undergo a delimitation exercise before elections. The Centre will form a delimitation commission to carry out the demarcation of wards.

Experts highlighted that given the current scenario, civic polls are unlikely to take place before early next year due to the delimitation exercise.

The move to merge the three civic bodies had triggered a political blame game with Delhi's ruling Aam Aadmi Party terming it a tactic to delay the elections.

Deputy Chief Minister Manish Sisodia had said that the BJP wanted to unify civic bodies only to delay the elections.

"In the guise of the bill, the BJP is killing democracy by stopping MCD elections. According to me, this is not the MCD reform bill, this is the 'Stop MCD Elections' Bill," Sisodia had said in Delhi Assembly.

Delhi BJP president Adesh Gupta had said that the unification of three municipal corporations into a single entity will prove to be a milestone in the development journey of the city.