Rescue workers on Wednesday continued to search for trapped survivors amidst the debris of the collapsed building in East Delhi. A senior fire brigade official said the debris clearance operation at the collapsed spot in Lalita Park is going on and it may take some more hours to clear it.

The toll in the four-storey building collapse in East Delhi rose to 67 with the death of an injured victim late on Tuesday night. The entire structure came crashing down around 8.15 pm on Monday.

Over 60 families, mostly labourers from West Bengal, were living in the cramped quarters of the 15-year-old building, where an illegal fifth floor was under construction. Director of Delhi Fire Services R C Sharma had on Tuesday said that rescue operations could wind up only by Wednesday morning.

Rescue workers would have to remove every bit of debris and ensure that nobody is trapped in the basement, he said.

Debris clearance operations were in full swing with rescue workers from the National Disaster Response Force, fire department, police, civil defence and locals working together to remove tons of concrete from the spot and rescue trapped victims.

A 250-member disaster management team has been deployed to help in the rescue effort. Following the incident, the Delhi government has ordered a magisterial inquiry into the incident.

The Delhi government also directed the MCD to urgently undertake a survey of all buildings in Laxmi Nagar area to determine their structural deficiencies, if any. The survey would be carried out within a radius of 300 metres from Pushta Road where the building collapsed on Monday night.

The foundation of the building is suspected to have weakened following heavy rains during monsoon when Yamuna River had flooded the area. The basement of the building was waterlogged for the last two months, locals said. 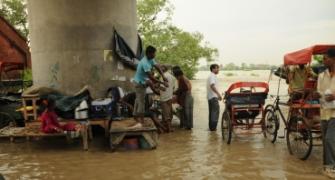