'Delhi blast must be a handiwork of local gang'

Investigations into the car that went up in flames barely minutes after two bikers opened fire at a tourist bus near Jama Masjid in New Delhi have revealed that explosives were actually used to trigger the fire.

After finding "a poorly circuited and crudely assembled bomb" inside a pressure cooker in the car's backseat, the police registered an FIR against unknown assailants under the Explosives Substances Act.

Two Taiwanese tourists  Zeseweiu and Chinangslo -- sustained bullet injuries after unidentified bikers opened several rounds of fire at a tourist bus on Sunday. Even as the assailants were fleeing after the attack, a blue Maruti car near the mosque exploded.

Zeseweiu has been discharged after treatment from LNJP hospital in the city. His companion, Chananglo, is still under observation in the ICU and his condition is said to be critical.

Investigations into the case have been formally handed over to the special cell, the capital's anti-terrorist force.

"It is too early to say anything, but prima facie it looks like no organised terror group has a hand in either incident. It looks like the handiwork of a gang of local criminals. On Sunday, we detained about 30 people with criminal histories for questioning and today, we picked up about 10 more. They are all locals and we are questioning them to get leads in the case," a senior police officer said.

Investigators are also questioning the owner of the car. Bobby Sharma, a resident of Chandni Chowk, had told police that he had parked his car elsewhere and did not know how it had reached outside Jama Masjid.

The Hindi Radio service of the British Broadcasting Corporation received a mail purportedly from the Indian Mujaheedin, claiming responsibility for the incident to avenge the deaths of two terrorists in a 2008 police encounter. Asked about this, the officer said that they have taken the e-mail and are trying to ascertain where it had been sent from.

"We are still verifying the origin of the e-mail. Prima facie, the mail also seems to have been doctored," the officer said.

The police has stepped up security across the capital after the British High Commission and a private counter-terrorism and security consultant company issued terror alerts. While the security consultants Homeland Security Asia-Pacific said there is an 80 per cent risk of terror attacks in the Indian capital, the British High Commission said that "there is a high threat from terrorism throughout India."

"We have stepped up security to allay fears of a terrorist threat in the state. We have the best possible security apparatus for the Comonwealth Games and there is nothing to worry," said Delhi police spokesperson Rajan Bhagat.

Sources in the Delhi police say, "We are not ruling out the possibility of the IM being involved in the attack, but leads show that these boys had links with the IM before the groups broke up following a spate of crackdowns across the country."

The police believe that the attack was aimed at causing panic ahead of the Commonwealth Games.

"The terrorists' intention was to kill a couple of tourists in the bus, but they panicked after opening a round of fire and fled the spot, which indicates that they were not well trained cadres. Had it been the main cadres of the IM, the result of this attack would have been devastating. These men had not specifically planned on targeting the bus, since they had no prior information. The bus was picked randomly," said the source. 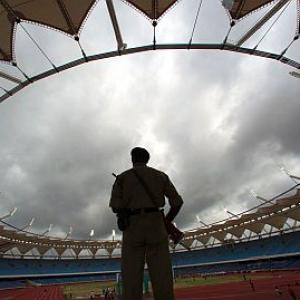 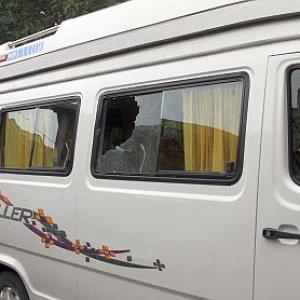