United States President Donald Trump on Tuesday insisted that he will 'win' the November 3 presidential election once the final votes are tallied and certified. 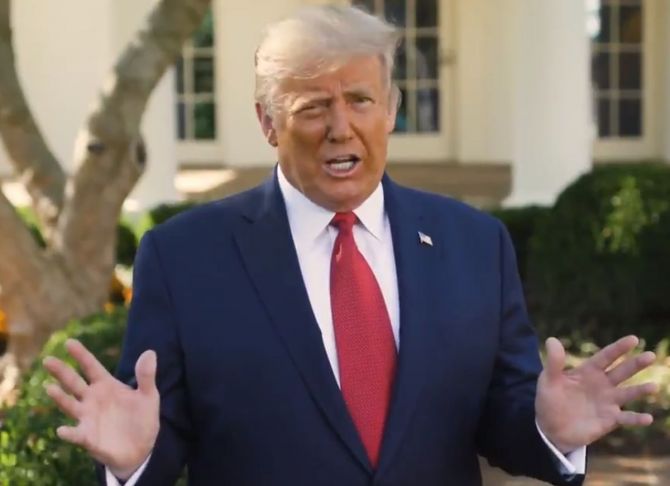 He has refused to concede the election, while the mainstream US media has declared 77-year-old Democratic presidential candidate Joe Biden as the winner, who is now the President-elect.

In the US electoral system, traditionally it is the major media networks which declare the winner while certified election results are declared weeks later.

This is unlike India, where the Election Commission is the only authority to declare the winner of an election.

According to The New York Times, President-elect Biden has 279 electoral college votes in his kitty as against Trump's 214.

Counting of votes for 45 electoral college votes are still going on.

To be the President, a candidate needs 270 of the 538 electoral college votes.

The lawsuits range from local courts up to the United States Supreme Court.

Denied by State officials and Democratic Party, the Trump campaign and the Republican Party have levelled accusation of serious voter fraud and electoral malpractices.

'WE ARE MAKING BIG PROGRESS. RESULTS START TO COME IN NEXT WEEK. MAKE AMERICA GREAT AGAIN!' Trump said in another tweet, referring to the progress made in legal aspect of his cases.

He did not provide any other detail.

'WATCH FOR MASSIVE BALLOT COUNTING ABUSE AND, JUST LIKE THE EARLY VACCINE, REMEMBER I TOLD YOU SO!' he said in a tweet.

Trump has alleged counting abuse, but has not offered further evidence to back up his claim.

Meanwhile, The Washington Post on Tuesday reported that a Trump administration appointee is refusing to sign a letter allowing President-elect Biden's transition team to formally begin its work this week, in another sign the incumbent president has not acknowledged Biden's victory and could disrupt the transfer of power.

In a video released on Tuesday, Republican senator Marco Rubio said that the fact that 70 per cent of Republicans don't believe the 2020 election was free and fair -- that should be of concern to everyone.

"That's why both sides should support allowing the post-election process provided for in our laws to work, to move forward. Our election laws call for recounts in close elections.

"And they require meeting specific deadlines for all this, so that a winner can be certified and take office," he said.

"Both Democrat and Republican candidates have used these laws themselves. They've availed themselves to these rights many times, including in this election.

"Joe Biden had hired an army of election lawyers to use this very process if he had fallen short in the preliminary results. And therefore, President Trump is well within his legal rights to pursue all these things under these laws now," Rubio added.