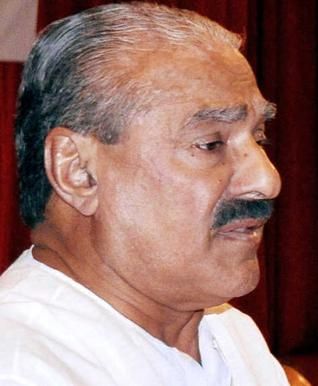 A defiant Kerala Finance Minister K M Mani, against whom an FIR had been registered in the bar bribery case, resigned on Tuesday night after pressure mounted on him from the ruling Congress-led United Democratic Front to quit.

A day after the high court upheld a Vigilance Court order for further investigations in the case, 82-year-old Mani, who put up a stiff fight to stay in office, however, had to yield to pressure from Congress, the lead partner which stood firm stating that the resignation was inevitable.

Mani announced his decision to resign after day long parleys with his party colleagues and made it clear that his party will continue to provide unstinting support to Chandy and UDF.

Accepting the resignations, Chief Minister Oommen Chandy, however, said Mani's decision to resign was his own and neither the Congress nor the UDF had compelled him to do so.

Chandy said even though the high court had not pronounced him guilty in the case, Mani's decision to resign was to uphold high political and democratic values.

Earlier in the day putting the UDF into crisis, Mani tried to prevail upon his party colleague and Irrigation Minister P J Joseph and Chief Whip Thomas Unniyadan, also to resign along with him.

However, after Joseph refused to yield, Mani, the seniormost legislator in the state, finally had no other option, but to give in and resign.

As Mani announced his resignation at his official residence in Thiruvananthapuram on Tuesday night, Joseph and two of his loyal MLAs -- T U Kuruvilla and Mons Joseph were conspicuous by their absence.

Kerala Congress-M, a powerful regional party and third largest coalition partner in the UDF, has nine MLAs, including rebel P C George, who announced on Tuesday that he would submit his resignation on November 12.

The party has a sizeable vote bank in the central Travancore area in the state, especially among Christians.

With the High Court making observations like Caesar's wife should be above suspicion, clamour for Mani's resignation grew from various quarters, including Congress.

However, Mani loyalists spun a new theory stating that the verdict was in fact favouring their leader and there was nothing against him to prompt his resignation.

The opposition Communist Party of India-Marxist-led Left Democratic Front had already decided to intensify their agitation against Mani if he does not resign and announced that they will commence "indefinite satyagraha" in front of the Secretariat from tomorrow.

The resignation comes as a huge blow to Mani, who has completed 50 years as legislator and this was an ignominious exit for a leader who had been elected to the Assembly in 1965 from Pala, which has returned him all these years.

Mani's troubles began after working president of Kerala state Bar Hotel Owners Association, Biju Ramesh, alleged in October last year that the Minister had demanded Rs 5 crore as bribe from the Association and accepted Rs 1 crore for renewal of licences of over 400 Indian made foreign liquor bars, triggering a political storm.

An FIR had been filed against Mani in the court last year after a 'quick verfication' by the Vigilance on the allegations made by Ramesh.

However, Chief Minister Oommen Chandy and Mani had maintained that it was a politically motivated charge and had denied the allegations.

The final report, seeking closure of the case against Mani, was challenged by CPI-M veteran and Opposition leader V S Achuthanandan and eight others who sought a further probe into the case.

Kerala had also witnessed a series of agitations by CPI-M-led LDF demanding Mani's resignation since the bar bribery allegations broke out.

The assembly had also witnessed unprecedented violence with opposition and ruling front MLAs coming to blows over the issue when LDF members tried to prevent Mani from presenting the budget on March 13 this year.

He also holds the record of having presented the maximum number of 13 budgets in the state assembly as Finance Minister.

Mani was first elected to state assembly from his home constituency Pala in Kottayam district 1965. His son, Jose K Mani, is the the party MP from Kottayam.

Apart from Finance, Mani had also handled the Home and Revenue portfolioes.

Veteran Congress leader late K Karunakaran, Kerala Congress-B leader, R Balakrishna Pillai and his son K B Ganesh Kumar, IUML leader P K Kunhalikutty, Kerala Congress-M leader P J Joseph are among those who were forced to resign either due to court verdicts or other reasons.

This is the second resignation of a Minister in the Chandy cabinet that came to power in May 2011, the first being Ganesh Kumar in April 2013, who was forced to resign following complaints of domestic violence by his estranged wife.