UN medal for 8 Indian peacekeepers killed in line of duty 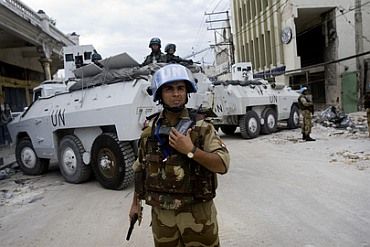 Eight Indian soldiers, who lost their lives while serving in United Nations peacekeeping operations last year, are among 106 military, police and civilian personnel to be posthumously awarded a prestigious UN medal this week for their courage and sacrifice in the line of duty.

The Dag Hammarskjold Medal, named after the second UN Secretary General, will be awarded on May 29, which is commemorated as the International Day of UN Peacekeepers.

The fallen Indian peacekeepers to be awarded are Lt Col Mahipal Singh, Lance Naik Nand Kishore Joshi, Havildar Heera Lal, Naib Subedar Shiv Kumar Pal and Havildar Bharat Sasmal from the UN Mission in South Sudan (UNMISS) who were killed in April last year when they were ambushed by about 200 attackers near Jonglei State as they escorted a UN convoy.

Subedar Dharmesh Sangwan and Subedar Kumar Pal Singh died in action in December last year in Akobo following an assault on an UNMISS base.

Sepoy Rameshwar Singh, deployed as a peacekeeper in the UN Organization Stabilization Mission in the Democratic Republic of the Congo was killed in February 2013.

In honour of the fallen peacekeepers and those who continue to serve in the cause of peace, several commemorative events would be held at the United Nations headquarters in New York on the Peacekeepers day.

UN Secretary-General Ban Ki-moon would oversee a solemn wreath-laying ceremony in honour of all fallen peacekeepers at the Peacekeepers Memorial.

Ban would then make remarks at a ceremony at which the Dag Hammarskjold medal would be awarded to 106 peacekeepers who lost their lives in 2013.

The medals for military and police personnel would be received by representatives of the respective Permanent Missions to be forwarded on to the next of kin.

Currently, a total of 8,132 Indian soldiers are deployed in 10 critical UN peacekeeping missions across the world including 429 in Haiti, 4,034 in Congo, 193 in Golan Heights, 894 in Lebanon, 250 in Liberia and eight in Cote d'Ivoire.

The Dag Hammarskjold Medal was established in December 2000 and is awarded posthumously to members of peacekeeping operations who lost their lives during service.

Hammarskjold, a Swedish diplomat, died in a mysterious 1961 plane crash. He was posthumously awarded a Nobel Peace Prize the year he died.