The full grant of OROP would raise annual military pensions to Rs 75,000 crore, only slightly less than the salary bill of Rs 93,216 crore. Ajai Shukla reports. 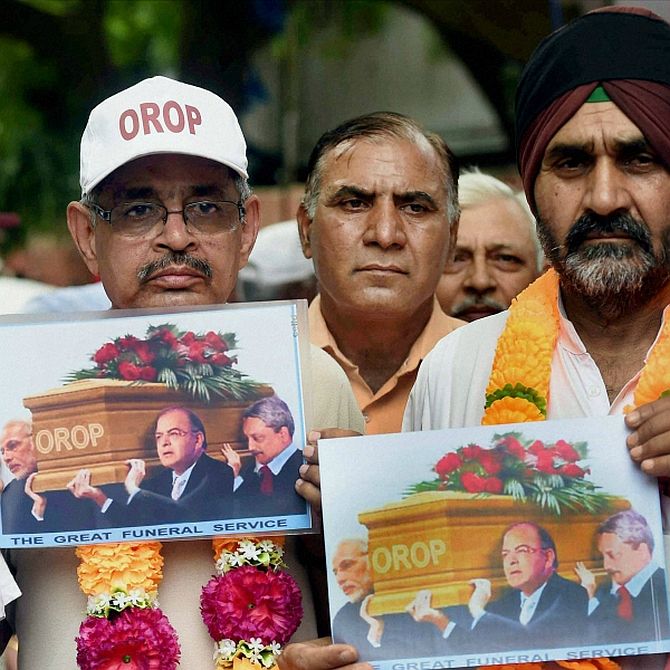 Political pundits and the media focused keenly on Independence Day on whether Prime Minister Narendra Modi would grant 'one rank, one pension', or OROP, to retired soldiers, sailors and airmen.

The defence ministry's department of ex-servicemen's welfare says India has 2.25 million military pensioners or veterans, and there are another 600,000 widows of veterans who are entitled to lifetime pensions.

Assuming each pensioner has a family of four, over 10 million voters would directly benefit from OROP.

This is a significant political constituency, especially in Punjab, Haryana, Himachal Pradesh and Uttarakhand.

The money involved is significant, too.

This year's Budget allocated Rs 54,500 crore for defence pensions; this would rise by about 40 per cent with the additional Rs 18-20,000 crore needed to meet all the veterans' demands.

India does not count military pensions in the defence Budget; though pensions, like salaries, are a component of personnel costs.

The full grant of OROP would raise annual military pensions to Rs 75,000 crore, only slightly less than the salary bill of Rs 93,216 crore.

What does OROP involve?

In essence, that all veterans who retired at the same rank should get equal pension, irrespective of when they retired, because they performed the same functions whilst in service and must make ends meet in the same economic conditions today.

Currently, each veteran gets a pension that is half the salary he drew on the date he retired.

Since military salaries have steadily risen, as determined by six successive pay commissions (the seventh one is currently deliberating another increase), veterans who retired earlier get significantly less than those who retire today.

The demand for OROP goes back to the Third Pay Commission in 1973.

However, this is the first time the veteran community has organised itself so publicly.

These unprecedented public protests have their roots in late 2013, when the Bharatiya Janata Party, and its chief election strategist, Amit Shah, targeted the veteran constituency as a vote bank.

Addressing ex-servicemen at a September 2013 rally in Rewari, Modi promised his government would implement OROP.

This, it turns out, was a token sum, as was the Rs 1,000 crore the National Democratic Alliance government allocated in its first Budget in July 2014.

A key question related to when OROP should be implemented from.

Implemented prospectively the payout would be Rs 10,000 crore; implemented from early 2014, when it was announced, twice that amount would be needed.

Photograph: Ex-servicemen during their agitation for 'One Rank One Pension' at Jantar Mantar in New Delhi. Photograph: PTI photo