India is observing the sixteenth anniversary of the Kargil War this week. Army chief General Dalbir Singh on Saturday paid tributes to martyrs during the sixteenth anniversary of the Kargil War at the memorial in Jammu and Kashmir's Drass sector.

The General laid a wreath at the war memorial and remembered the country's war heroes. After paying tributes to the martyrs, he said that the "Army won't allow another Kargil".

Though the celebrations to mark the 16th anniversary of India's victory in the Kargil War, also called Vijay Diwas, began on July 20, the main functions will be held this weekend. Army held a memorial service at the Kargil mar Memorial where prayers by religious leaders was organised. The wreath-laying ceremony for the martyrs was held today followed by an interaction with Veer Naris.

India was least prepared of war because it happened soon after Prime Minister Atal Bihari Vajpayee took a bus ride to Pakistan and the feeling was a new chapter had opened in India-Pakistan relations.

As General Pervez Musharraf said recently, Pakistan held India by the throat by occupying the heights of Kargil which overlooked the road that connected Srinagar to Leh. Indian armymen on a mountain peak in Kargil during the 1999 war.

The Indian Army had withdrawn from the heights in the winter of the year, and there was a feeling of complacency following the warm meeting between Prime Minister Vajpayee and his counterpart Nawaz Sharif.

Very few knew that while Vajpayee and Sharif were exchanging pleasantries, General Musharraf, the Pakistani army chief, was preparing for a conflict.

Pakistan occupied the heights of Kargil in winter. It deployed units of the Northern Light Infantry at the posts vacated during the winter by the Indian Army.

During the first week of May, India received reports of infiltrators coming into Kargil. The security forces initially thought that they were Mujahideen, but soon became aware that regular Pakistani forces had occupied the heights.

Soon, there was heavy shelling by Pakistan Army and the number of infiltrators increased in Drass Kaksar and Mushkoh sectors on the road leading from Srinagar to Kargil. 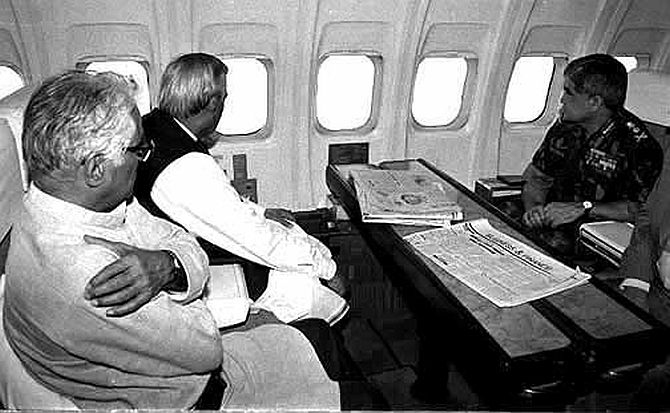 The then Indian Army Chief, General Ved Prakash Malik, who had gone abroad, returned and commenced preparations for the operations. Troops were shifted from the rest of Kashmir into the area, and the Indian Air Force launched strikes against the infiltrators. Being a mountainous area, it was difficult for the Indian Air Force to dislodge Pakistani troops.

The Indian Air Force lost two aircraft. The IAF fighters were shot down by the Pakistanis on May 28, and a MI-17 helicopter was shot down on May 28.

In the first week of June, the fiction that those who occupied the Kargil heights were 'Mujahideen' was given up. The Indian Army released documents captured from Pakistani soldiers on June 5.

On June 11, India released intercepts of conversation between the Pakistan Army Chief General Pervez Musharraf while on a visit to China and Chief of General Staff, Lt Gen Aziz Khan in Rawalpindi, to prove the complicity of the Pakistan Army crossing the Line of Control and occupying the Kargil heights. The Indian Army had stopped access to the area from media organisations when troops were inducted into the area. However, Gaurav Sawant, who was representing a New Delhi paper and had gone on a conducted tour, stayed back and reported the happenings.

Soon the Indian Army allowed media organisations to visit the area. Indian television coverage, which provided a live telecast of events, proved that the Pakistan Army had occupied the heights. Most of the coverage was the firing of artillery from Indian positions towards the heights occupied by the Pakistani Army.

Soon, reports started coming in of the progress of the Indian Army in recapturing the heights. Tololing was captured on June 13, Point 5060 and Point 5100 near Tiger Hill on June 29 and Tiger Hill on July 4.

When the facts of Pakistani intrusion became known the world over, and that too after Vajpayee's attempt to establish better relations with Pakistan, it had to defend its actions. Prime Minister Nawaz Sharief said he had been kept in the dark by the Pakistan Army. Pervez Musharraf, however, kept insisting that he had briefed the Prime Minister. 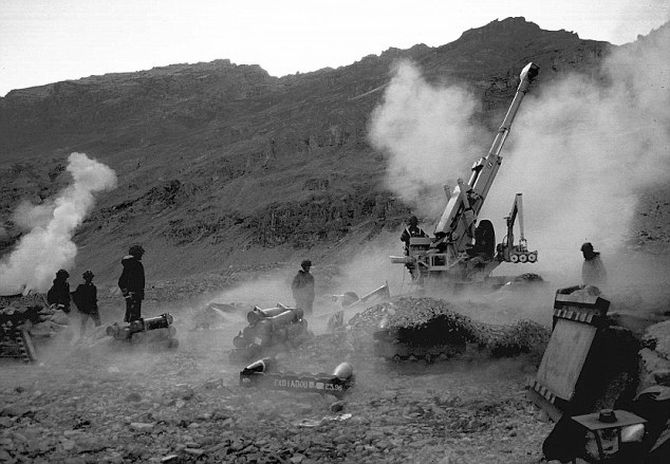 Again, the world was aware that India and Pakistan had nuclear weapons.

United States President Bill Clinton rang up Prime Minister Nawaz Sharif on June 15, and told him to pull out from Kargil.

Soon, the Pakistan Army started pulling out from the heights it had occupied and the Kargil crisis officially came to a close on July 26.

Pakistan was the recipient of the wrath of the world after the facts became known. The joint statement issued by President Clinton and Nawas Sharif conveyed the need to respect the Line of Control and resume bilateral talks to resolve the disputes between India and Pakistan. An IAF Mi-17 fires unguided rockets during Kargil ops. Initially, the IAF employed Mi-17s in attack role, but one was lost with 4 crew to a MANPAD.

The two-month-long war with Pakistan, the longest fought operations between the two nations, caused heavy casualties. In the conflict, the Indian Army lost 490 officers, soldiers and jawans.

July 26 was declared as Vijay Divas, and the way in which the Indian Armed Forces fought the war and tried to ensure that it did not escalate into a nuclear conflict, has been acclaimed the world over.

The Kargil Story by I Ramamohan Rao, former principal information officer to the Government of India