'The navy has evolved every aspect of our lives. Our characters are chiselled out.'

Vipin Vijayan/Rediff.com speaks to cadets passing out of the Indian Naval Academy.

Their proud parents in attendance, 330 smartly dressed cadets passed through the portals of the Indian Naval Academy in Ezhimala, Kerala, on successful completion of their training

Addressing the passing out parade, Chief of the Naval Staff Admiral R K Dhowan advised the new sub-lieutenants "to serve the country and the Indian Navy with pride and always uphold the five values: i. commitment -- to make supreme sacrifice for the nation and navy;
ii. courage -- both physical and moral;
iii. compassion -- towards men and women they lead;
iv. credibility -- in performance and character;
v. to have integrity beyond doubt -- always and every time."

'When I came here, I had a dream, and now that dream has come true' 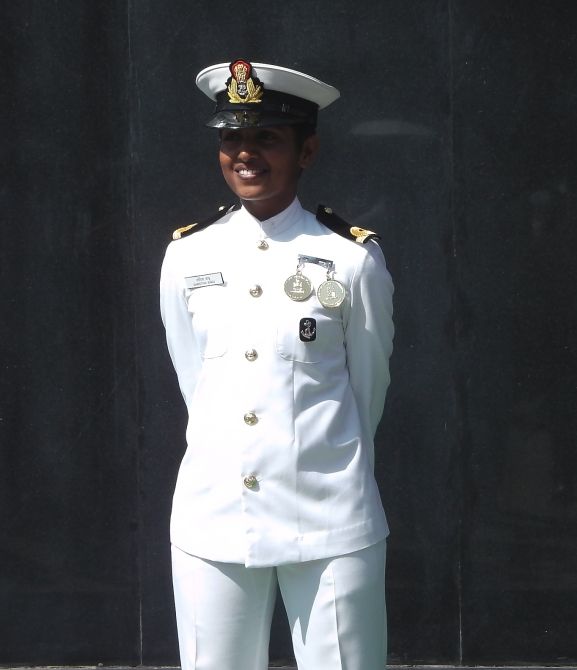 The smile never leaves Darshita Babu's face. The young cadet has more than one reason to cheer.

One among the 22 women cadets who received their stripes, Darshita was awarded the Chief of Naval Staff's gold medal for the cadet adjudged first in the overall order of merit and the Flag Officer Commanding-in-Chief (South)'s gold medal for being the best woman trainee of the course.

A National Cadet Corps gold medalist, a black belt in karate, a classical singer, a classical dancer specialising in Bharata Natyam, Mohiniattam and Kuchipudi, a member of the Kerala University women's football team -- the list of Sub Lieutenant Darshita's achievement just goes on.

And she credits all this to her parents.

"My father Dinesh Babu is a clerk in the Ulikkal government high school in the Kannur district of Kerala. He and my mother Lissy have always been my guiding spirits. It was they who inspired me to join the NCC. Once I joined the NCC, I knew where I was headed next (Darshita has a C level certificate from the NCC and is the recipient of the chief minister's gold medal for the Kerala and Lakshadweep Directorate)," she says.

"I wanted to be a pilot, but fell short of the required height qualification by 0.5 cm. So instead, I decided that after completing my Bachelor's in Mechanical Engineering (from the T K M College of Engineering in Kollam district), I will take up a course in naval architecture."

"I came the through the university entrance scheme, wherein recruiters came to our college and conducted interviews based on which they selected me for the Service Selection Board."

With the desire to excel, she came to the naval academy.

"When I came here, I had a dream to be the best trainee. And now that dream has come true," she says, not without understandable pride.

Darshita is now headed to Visakhapatnam for a 6-month sub course on naval architecture. 'There's no better place to be than in the navy'

Arun Balaji, Ganeshwar Kumar M and Loghanathan V can't believe how much they have transformed in the last one year.

The trio from Chennai completed their BA and BTech before being being selected for the one-year Naval Orientation (extended) course.

"In the last year, we have evolved a lot -- both in terms of mental stamina and our thinking," says Loghanathan.

Arun chips in, "The other day we were looking at a photograph of ours taken a year ago. We have lost at least 15, 20 kg. I was 93 kg (laughs). Previously, we wouldn't be able to run even two kilometres. But now we run for 15, 20 kilometres at a stretch. And it is pretty normal."

Being in the navy was never the first choice for the trio. Arun worked as a cryptographer in an IT firm for over four years.

"I had a passion for the defence forces, but I never really thought of joining it. When I did make up my mind, the transition from IT to navy wasn't easy. But I was determined to push myself," he says.

On Thursday, November 26, Arun was awarded the Chief of Naval Staff's gold medal for the cadet adjudged first in the overall order of merit.

Loghanathan too was part of an IT company. He tried unsuccessfully to get through the civil service examinations. That's when he turned his attention to the armed forces.

"I had to do something for my nation," says Ganeshwar. "So what better than joining the defence forces?" he asks.

Ask them if they have been punished while at the academy, and Loghanathan promptly replies: "There's a punishment called Mark A Patrol where we are made to run for 25 kilometres for four hours. But we took it in our stride. It's training in disguise. It improved our endurance."

"The navy has evolved every aspect of our lives. Our characters are chiselled out," says Ganeshwar.

The three sub lieutenants, who will now head for sea cadet training at the Kochi command, have a word of advice for young Indians.

"There's no better place to be than in the navy. If you want to join the armed forces, come and be a 'man in white'."

Before the trio head out for the next round of their training they are planning a month-long vacation.

HOME! they say in unison.