News
Business
Movies
Sports
Cricket
Get Ahead
Money Tips
Shopping
Sign in  |  Create a Rediffmail account
Rediff.com  » News » 'We would have gone to war with Pak after Parliament attack, but...'

'We would have gone to war with Pak after Parliament attack, but...' 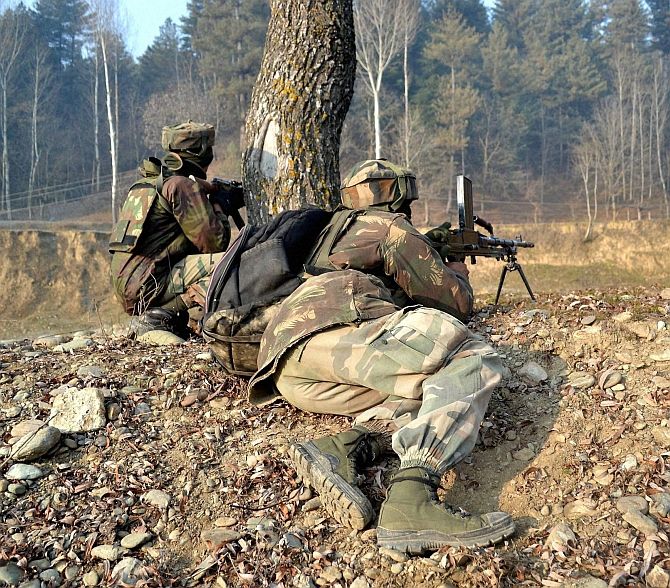 Union Minister Gen (Retd) V K Singh on Friday said that the Indian Army was capable of executing daring operations to avenge 26/11-like attacks by eliminating offshore criminals but certain "considerations" prevented it from doing so.

Singh was supported by former Delhi Police Commissioner Neeraj Kumar, who said that during his stint with the Central Bureau of Investigation, the agency had chalked a plan to get a "certain gentleman" in Pakistan which was scuttled on the last day by the "political bosses".

Underlining the importance of political "will", Union Minister of State for External Affairs Gen Singh said India would probably have "gone to war" with Pakistan after the Parliament attacks but for the delays from the part of the political leadership.

"India said it is not acceptable (Parliament attack). India deployed its troops. Big brother started monitoring it. Probably we would have gone to war. But the type of messages that must have been given to the political leadership at that time from people who did not want the war, delayed the process.

"And then came a time we were told to wait for (then Pakistan premier Parvez) Musharraf to speak. After Musharraf had spoken on January 12 he had said we will make amends and words to that effect. So the big boss would say 'look hey, he's told you so why do you want to go to war now' and then things had already gone too far and too delayed," he said.

The minister added that "you may have the will but when you weigh other factors you might find that it may not be prudent to do a particular thing."

"Indian army is very capable. Given a task it will execute it in a much better manner than the Americans did (referring to US operations to kill Osama Bin Laden). As a country I think we have been giving much more elasticity to our limits of tolerance. Somewhere I suppose there are factors which 99 per cent people won't understand as to why?" Singh said, speaking at a book release function in New Delhi.

Terming India as a "soft state", Kumar said that India was soft even when it came to "thinking" about avenging.

"When I was in the CBI for nine years at one time we had conceived a plan to get at a certain gentleman in Pakistan. Everything was done. At the last day we thought we would inform the political bosses or shall I say the boss but he said no, we are not Pakistan, we are India," he said.

Kumar went on to say that the agency had also planned of using "non-state" actors for the mission.

"All the preparations went down the drain. Lot of money was invested. We had also planned the use of non-state actors as Pakistan has been doing continuously," he said.

Singh said that a country like Israel, which has got full backing from the "only superpower" that exists, can do certain things without considering the consequences.

"India is not in that state. We have to take care of many things. Especially effect on the economy," the former Army Chief said.

The duo was speaking at the launch of journalist-author S Hussain Zaidi's book Mumbai Avengers, a fictional account of a covert operation by a retired Indian Army officer to avenge the 26/11 attacks.

On the 26/11 Mumbai terror attacks, Singh hinted towards an intelligence failure that resulted in the dastardly attacks resulting in the killing of around 166 persons adding that a lot of things could have been handled "differently".

"There were 10 mobile numbers given to our intelligence set up with the instructions that something will happen on these numbers... Out of those, four became active when they (terrorists) had landed.