All aboard: India, US and Japan navies in 'Malabar' action

Initiated in 1992, as a bilateral exercise between the Indian and US navies, the scope, complexity of operations and level of participation has increased steadily in successive editions of the India-US Malabar Naval Exercise as was witnessed in the 19th edition of the exercise that took place last week. 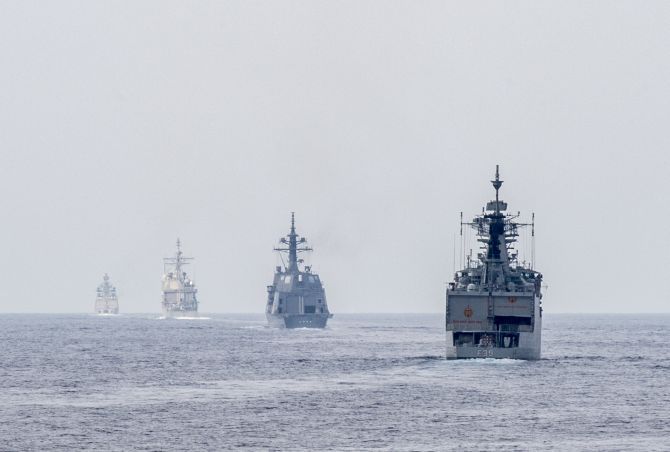 Ships from the Indian navy, Japan Maritime Self Defense Force and US Navy get into formation for a gunnery live-fire exercise as part of Malabar 2015. Photograph: DVIDS

The 19th edition of the exercise was conducted in the Bay of Bengal from 14 -19 October 2015. Along with the Indian Navy and the US Naval Forces, the Japan Maritime Self-Defense Force also participated in the exercise. 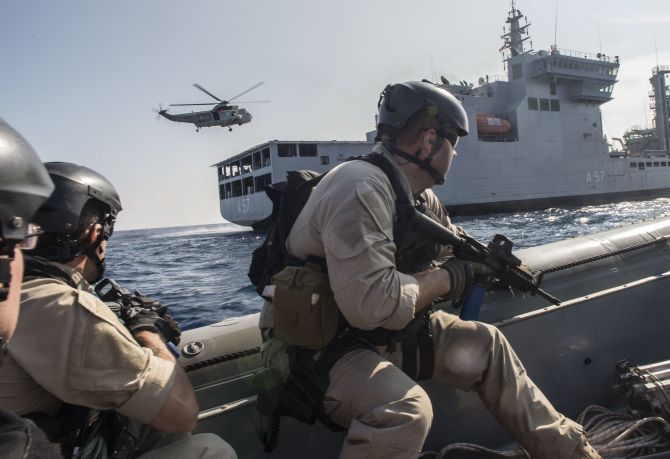 Sailors assigned to Surface Warfare Mission Package, Detachment 4, currently embarked aboard the littoral combat ship USS Fort Worth (LCS 3), train with the Indian navy in an 11-meter rigid hull inflatable boat during a visit, board, search and seizure drill as part of Exercise Malabar. Photograph: DVIDS

The scope of Malabar 2015 included wide-ranging professional interactions during the Harbour Phase and a diverse range of operational activities at sea during the Sea Phase. 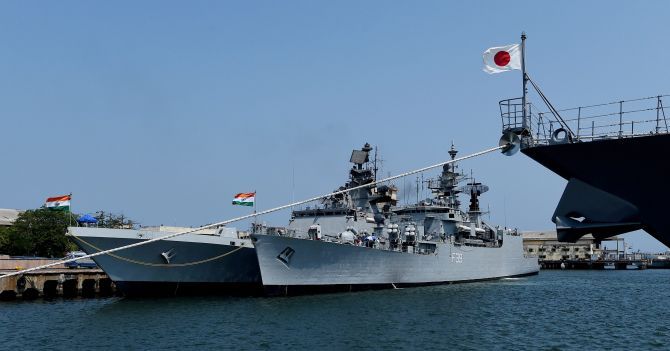 Indian and Japan Navy Ships during the media visit of five-day Malabar exercise on the Eastern coast, at the Port Trust in Chennai on Thursday. Photograph: R Senthil Kumar/ PTI

During the harbour phase in Chennai, the Fort Worth crew participated in subject matter expert and professional exchanges on maritime patrol and reconnaissance operations, surface and anti-submarine warfare, medical operations, damage control, helicopter operations and visit board search and seizure operations. 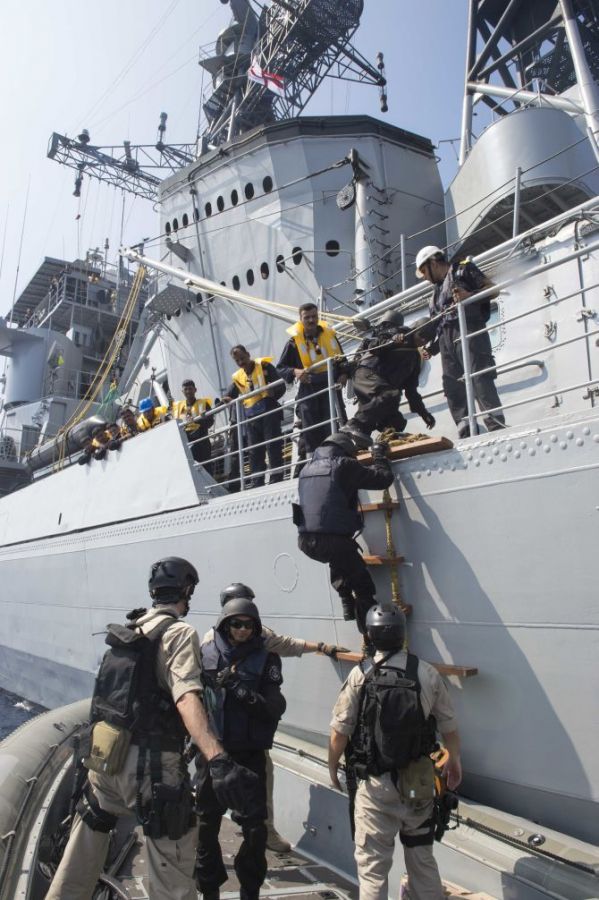 US Navy sailors take part in a search and seizure drill. Photograph: DVIDS

Included during the harbour phase was a tour of the Fort Worth for sailors from the India Navy and JMSDF.

During the tour, the sailors were given a presentation by sailors assigned to Helicopter Strike Squadron 35, Detachment 3 on the MQ-8B Fire Scout unmanned aircraft system and were briefed on the capabilities of Fort Worth. 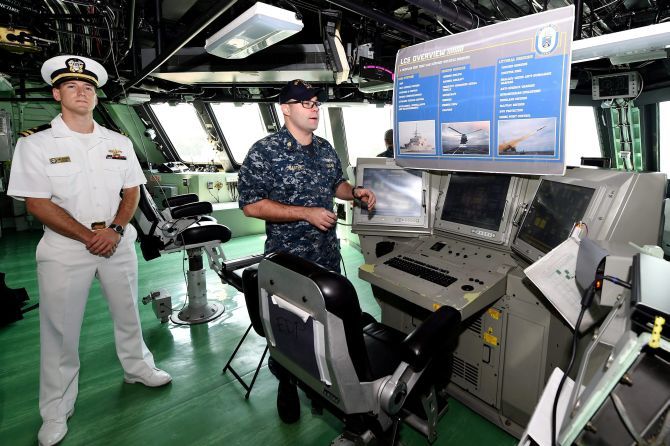 A US naval officer shows off the American ships' comms port. Photograph: US Navy

2015 marked the first time that a US Navy littoral combat ship has participated in Malabar and will be the first time one has operated in the Indian Ocean, which will occur during the sea phase portion of Malabar. 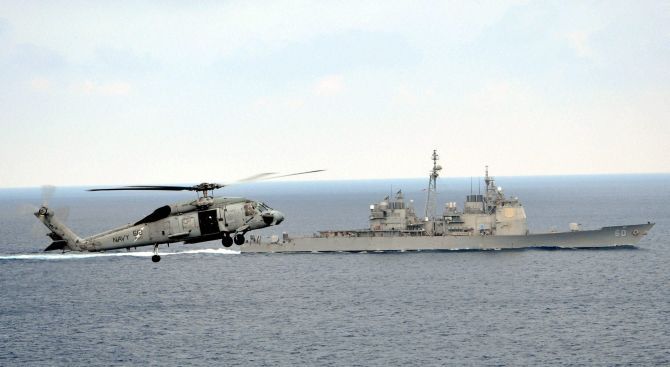 A US Navy helicopter approaches to land on the deck of aircraft carrier USS Theodore Roosevelt, a missile cruiser and a nuclear-powered submarine during Exercise Malabar 2015. Photograph: PTI

"I think the US and India defence relationship stands on its own... when we think about our shared values -- rule of law, constitutional democracy (and) peaceful resolution of disputes -- and that the real impact of our two nations coming together from a strategic point of view, an economic point of view, political point is actually to increase peace and stability and prosperity," US Ambassador to India Richard Verma said about the exercise. 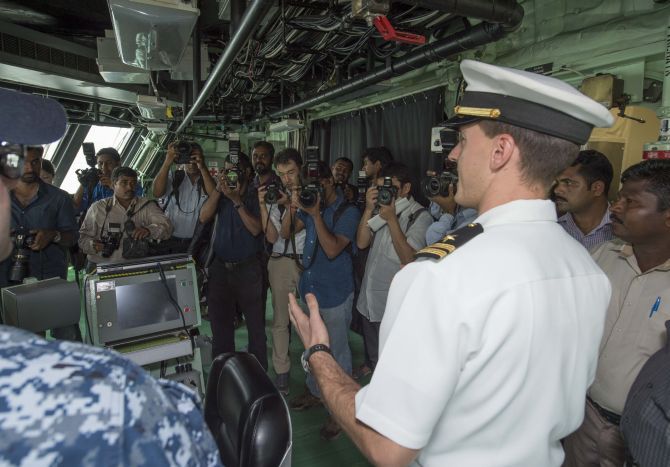 Lt. Arterberry explains boat operations during a tour for Indian mediapersons on the bridge of the littoral combat ship USS Fort Worth. Photograph: DVIDS

"I remember what (US) Vice-President (Joe) Biden said a few years ago that if the US and India are the closest friends and partners, the world will be a safer place. That is the heart of this relationship," he added. 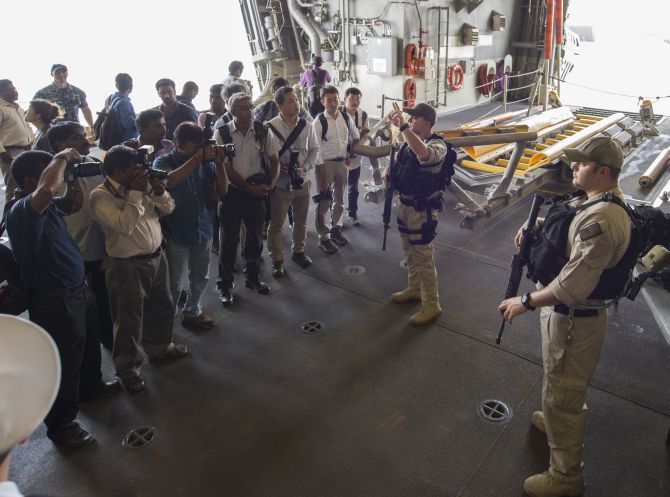 Kelley said in the Asia-Pacific "this vast area of ocean is very, very important to the rest of the world, mostly due to the commerce that comes through." E2D Hawkeye AWACS taking off from the US Carrier USS Theodore Roosevelt during the ongoing Exercise Malabar 2015 somewhere in Indian Ocean on Sunday. Photograph: PTI

"Lot of the world's commerce flows in and around Indo-Asia Pacific region. So we want to make sure that the lines of commerce, lines of communication stays open," he added. 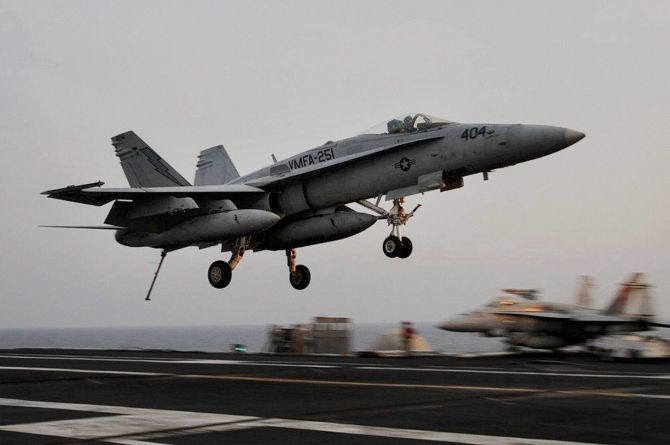 A US Navy fighter aircraft flies over the aircraft carrier USS Theodore Roosevelt (CVN 71), a missile cruiser and a nuclear-powered submarine, during Exercise Malabar 2015, some 152 miles off eastern coast. Photograph: PTI

The exercises included anti-submarine warfare, search and rescue and others, Kelley said while expressing happiness over the number of vessels and flights deployed by the Indian and Japanese navies. 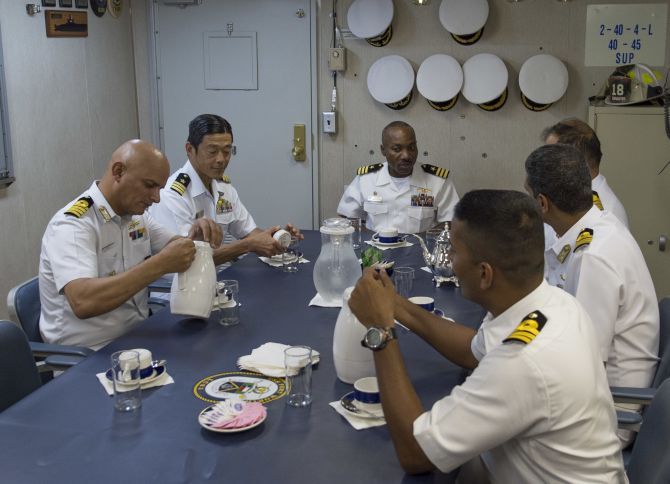 Cmdr. Christopher Brown, commanding officer of the littoral combat ship USS Fort Worth, center, speaks with officers from the Indian Navy and Japan Maritime Self Defense Force in the wardroom during their visit to Fort Worth. Photograph: PTI

There were a 'good mix' of frigates, destroyers and others, he said. 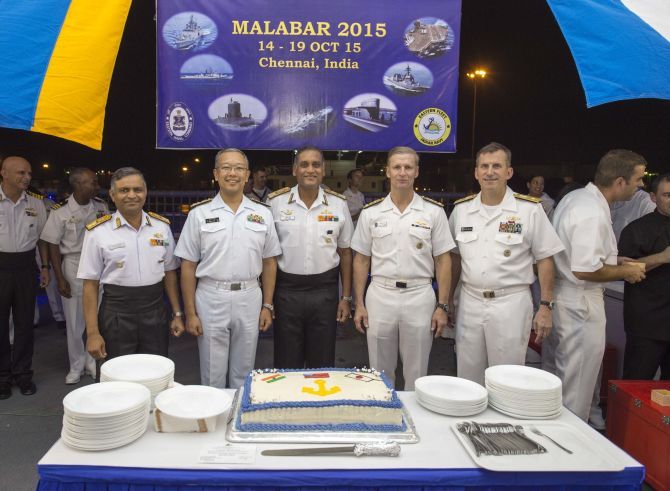 Admirals from the Indian Navy, Japan Maritime Self Defense Force and U.S. Navy pose for a picture during a cake cutting ceremony aboard the littoral combat ship USS Fort Worth (LCS 3), as part of Exercise Malabar 2015. Photograph: DVIDS

Craig Clapperton, Commanding Officer of the aircraft carrier, said, "This is a full spectrum maritime domain operation and the three navies are all working to the greatest extent possible to learn and enhance inter-operability.”