The Indian Navy showcased its might off the Bay of Bengal when it held the second edition of the International Fleet Review last week. Vipin Vijayan/Rediff.com, who was on board INS Sunayna for the fleet review, shares his experience. 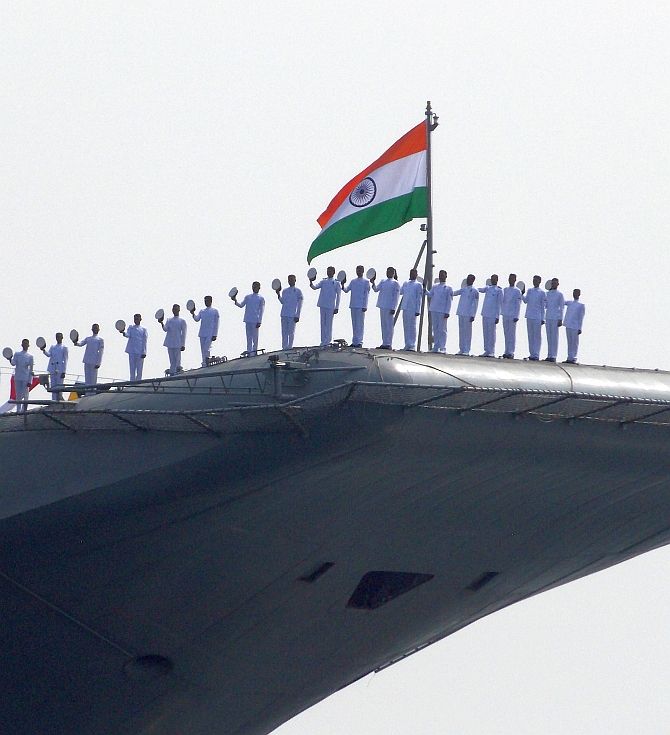 Sailors on board INS Vikramaditya doff their caps in unison in a grand salute.

The satin naval ensign on the mast of the 2,215 tonne offshore patrol vessel INS Sunayna was fluttering proudly.

Trained lenses on its deck peered into the distance hoping to catch 'the' prized shot.

A sense of excitement buzzed through the air; some anxious eyes in uniform prayed for good tidings and smooth sailing.

Months of preparation had built up to this momentous day -- the International Fleet Review.

The review, conceived as a show of the country’s naval might and readiness for battle, would see as many as 100 naval ships, including 70 from the Indian Navy, taking part in the second edition of the coveted event. 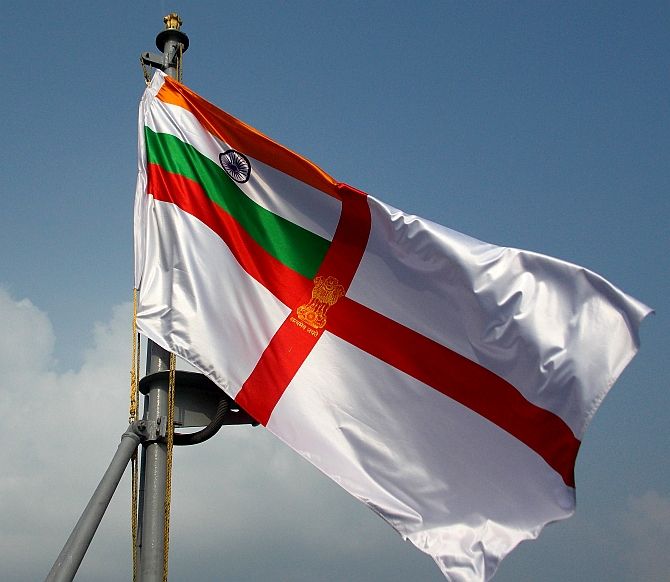 The naval ensign on board the offshore patrol vessel INS Sunayna

Held once during the tenure of a President, it was Pranab Mukherjee’s turn to review six columns of ships and witness a spectacular flypast by naval aircraft.

He would be in the first of the four-ship column, INS Sumitra, which had earned laurels in March 2015 when her crew rescued 350 Indian citizens stranded in Yemen and escorted the evacuees from the Yemeni port of Aden to Djibouti across the Red Sea.

Also on board would be Prime Minister Narendra Modi, Defence Minister Manohar Parrikar and the tri-service chiefs and other military top brass.

The other two Saryu class ships -- Saryu and Sumedha -- were to take the VIPs out into the Bay of Bengal sea with the members of the media, including this correspondent, at the fag end of the column on board INS Sunayna.

On our way out of the dockyard, the surrounding hillocks bear silent testimony to a recent natural disaster. 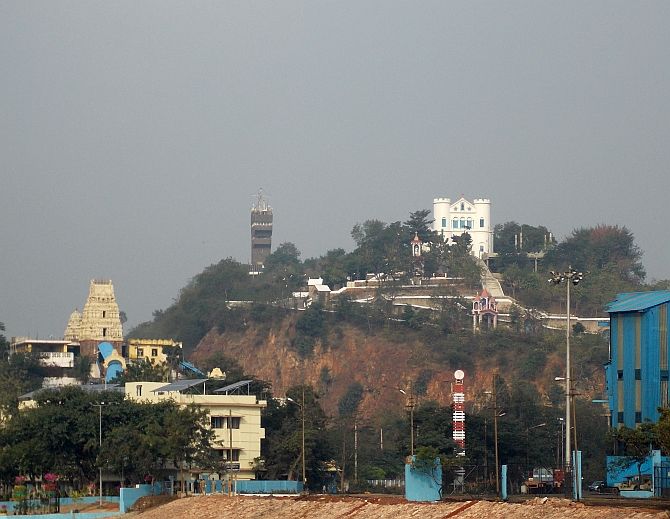 A glimpse of the naval dockyard. On closer examination, one can see a temple, a mosque and a church side by side on the hillock.

A little over a year ago, the idea of holding an event of such an immense scale would have been unthinkable.

For on October 14-15, 2014, Visakhapatnam was lashed by super-cyclone Hudud that brought winds of 205 kmph to the port city, causing damage worth thousands of crores of rupees and claiming six lives.

As Navy Chief Admiral Dhowan recalled time and again during the fleet review, nearly 50,000 trees had been uprooted within the naval base itself. The base resembled a war zone, he said.

No wonder Visakhapatnam is referred to as the city of destiny.

Around 9:30am, the presidential yacht joined us out in the deep seas. INS Sumitra’s deck could be seen buzzing with activity. 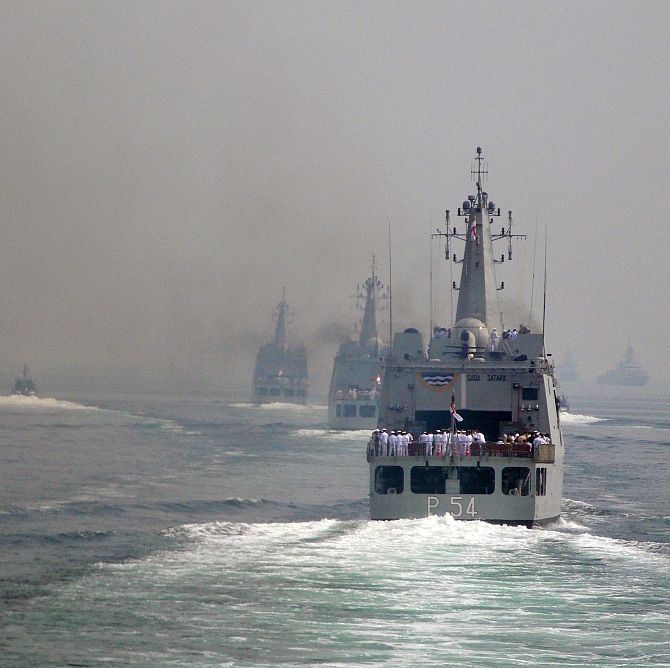 The presidential column during the fleet review.

As the four-ship formation lined up one behind the other, the first of the ships to be reviewed emerged on the horizon. It was the INS Tarangini, a three-masted barque, commissioned in 1997 as a sail training ship for the navy.

The ship with its complement of six officers, 40 sailors and nearly 30 trainees saluted the President -- some from atop the ship’s masts -- with their caps held high.

On the deck of INS Sunayna, meanwhile, the media had just been given restricted access to the ship.

Barring the captain’s bridge and the lower decks, we were allowed to venture into other sections of the ship.

It was a first-of-its-kind experience for many on board the Sunayna; it gave them a fleeting glimpse of how life on the seas was like. Like kids who had just been given free access to an amusement park, the media scurried past narrow passages and stairs, through the iron doors, scrutinising the ship, its guns and paraphernalia. 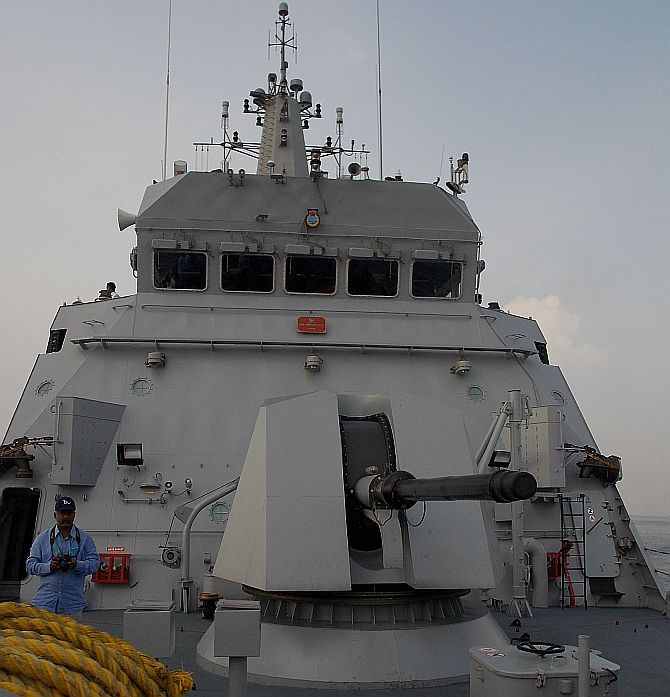 A view of the bridge of the offshore patrol vessel INS Sunayna.

For some junior officers, this was their first-ever review.

One junior officer told this correspondent that the occasion -- when they saluted their Supreme Commander -- gave them a tremendous sense of pride.

Meanwhile, the presidential yacht sailed past ship after ship, dressed in full regalia. Each ship was manned by her company, all dressed in white ceremonial uniform.

In a moment that stood still in time, white caps were doffed in unison in a grand salute. The resounding sound of Three Jais by the naval ships echoed over the waves, symbolising the spirit of camaraderie and bonhomie across the seas. 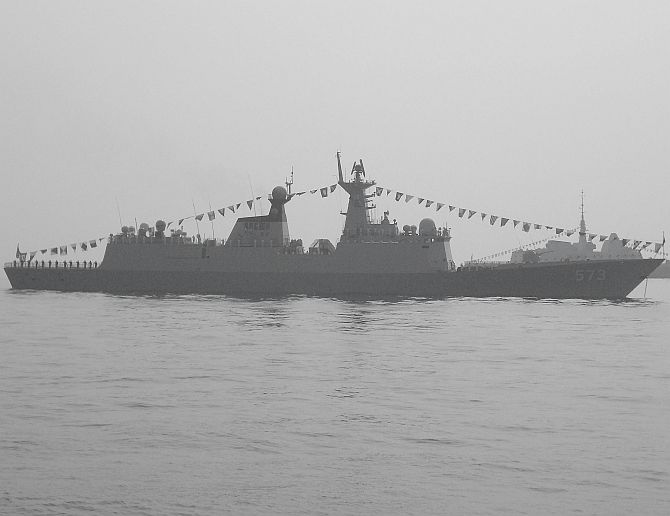 But it was the sight of guided-missile frigates Liuzhou and Sanya of the Chinese People’s Liberation Army that had many rushing for their cameras.

Recent Chinese activity in the Indian Ocean Region has been a matter of concern for the Indian establishment. The occasional spotting of Chinese submarines in the IOR recently prompted India to deploy its latest long-range maritime patrol aircraft at its forward military base located in the Andaman and Nicobar Islands.

Beijing, on the other hand, justifies its presence arguing that much of its energy interests were in the Indian Ocean.

In the run-up to the fleet review, Admiral Dhowan sought to calm down sentiments when he said that “no single navy is robust enough to provide safety and stability on its own. This is the responsibility of the men in white -- the navies and the coast guard -- to come up with cooperative mechanisms. And that is the theme of the fleet review -- that we are united by the oceans, to make the global commons safe and secure.”

As the Liuzhou sailed past the presidential convoy, many waved at the Chinese sailors hoping that the tensions between the two countries would simmer down in the days to come. 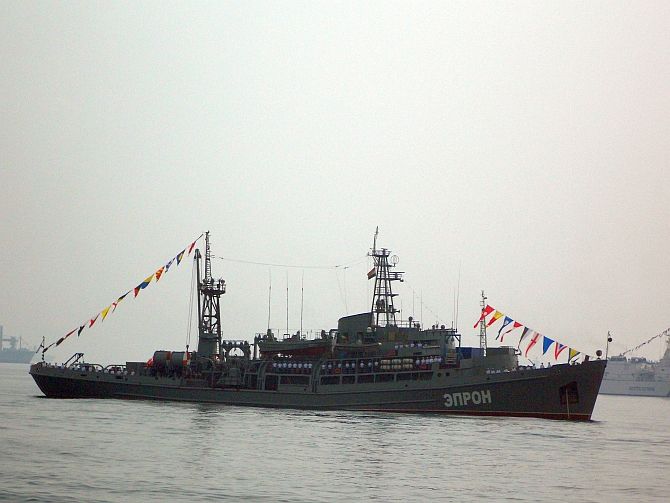 Another head-turner was the Russian submarine rescue vessel Epron from the Baltic Sea Fleet.

The Epron, which can operate at a depth of 1,000 metres, was the oldest vessel being reviewed on the day.

What raised eyebrows was the presence of Epron at a time when the Indian Navy’s 6,000-tonne submarine, INS Arihant is presently in the final stages of sea trials. The submarine's design is based on the Russian Akula-1 class submarines and its 83 MW pressurised water reactor, which went critical in 2013, has been built with significant Russian assistance.

Talking of submarines, the only participants in the fleet review were three Sindhughosh class diesel-electric submarines -- INS Sindhuraj, INS Sindhukirti and INS Sindhuvir. 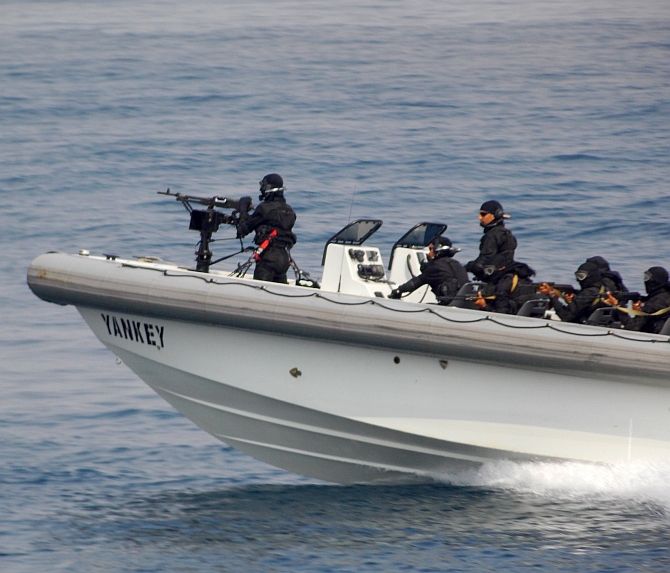 MARCOS in action at the fleet review

As the presidential column finished the first leg of the review, the elite marine commandos or the MARCOS executed a daring display.

As I waited for our ship to turn and enter the second leg of the review, I decided it was time to dig into the delicious spread neatly laid out by the navy. I barely had time to grab a bite in the morning for we had been told to report at our pick up points at 6:30 am.

The second leg began while I was still holding on to my plate. I kept it aside, as I didn’t want to miss any moment. 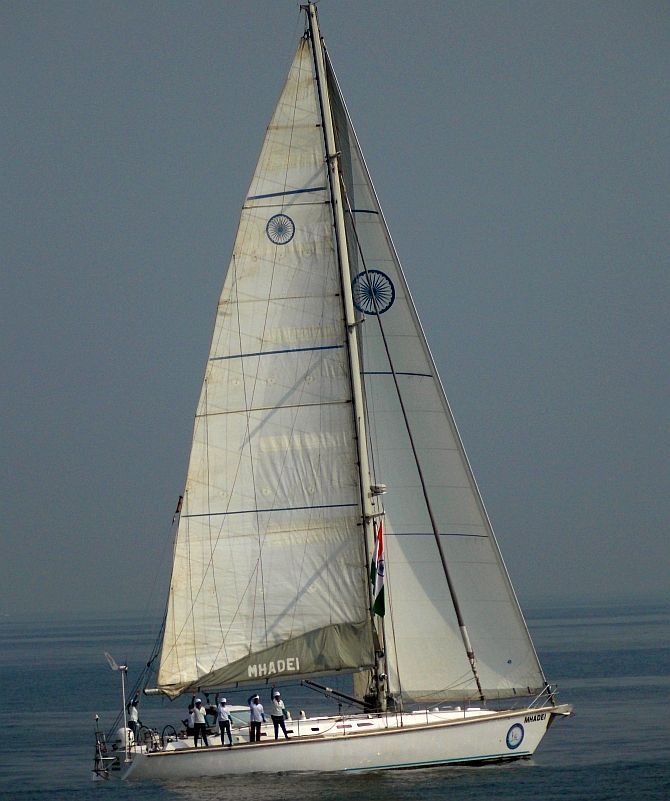 Unmissable among the of next two rows of ships was the Mhadei sailing vessel, which made maritime history in 2010 when Commander Dilip Donde set a record for the first-ever solo circumnavigation of the globe on a sail boat by an Indian; he steered into the Mumbai harbour after 276 days on the high seas.

Then in 2013, Abhilash Tomy became the first Indian and the second Asian and the 79th person on the earth to complete the solo, non-stop circumnavigation of the globe on wind power.

At present, four women led by Lieutenant Commander Vartika Joshi are training to be the first ever all-woman team to perform the same feat. Personnel on board INS Airavat salute their Supreme Commander

The Make in India thrust was prominently on display at the review.

All of which were built in Indian shipyards. 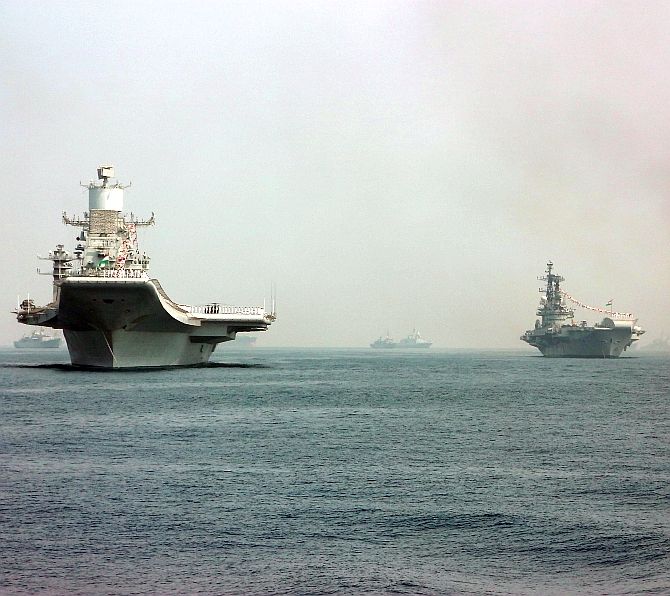 A rare sight: INS Vikramaditya is seen with INS Viraat (in the background)

As the presidential column turned around once more for the last leg of the review, all eyes were trained upon the two behemoths that were fast coming up on the horizon.

Perhaps this would be the last time that India’s two operational aircraft carriers – the 45,000-tonne INS Vikramaditya and the 28,700-tonne INS Viraat – would be seen together.

The cameras never stopped clicking. The excitement made the port (right) side of the Sunayna heavy, prompting a gentle reminder by its crew that we remain a few steps back. 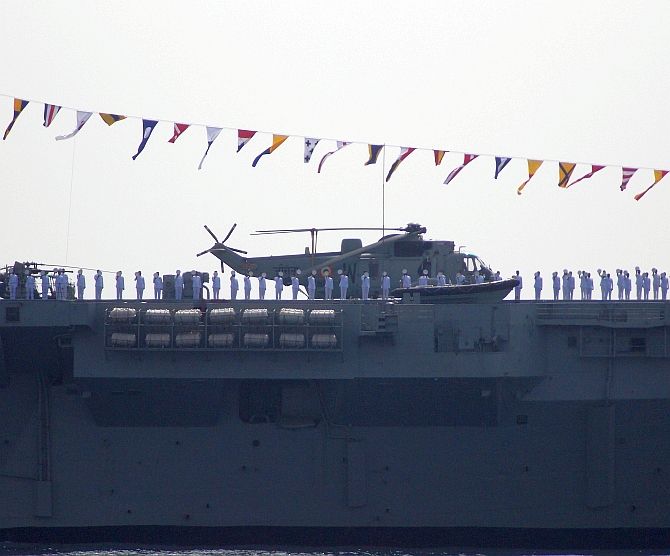 Personnel on the flight deck of INS Viraat in a grand salute.

The Viraat, which saw action in the Falklands War and remained for well over a decade the sole aircraft carrier in the Indian Ocean region following the decommissioning of the first Indian carrier INS Vikrant in 1997, is set to retire after 57 years of service, including 29 years in the Indian Navy.

The aircraft carrier’s proud complement of 150 officers and 1,500 sailors lined up along the sides to salute the supreme commander one last time.

It was indeed an emotional moment. Last heard, the old warhorse is set to be converted into a 500-room hotel or resort. 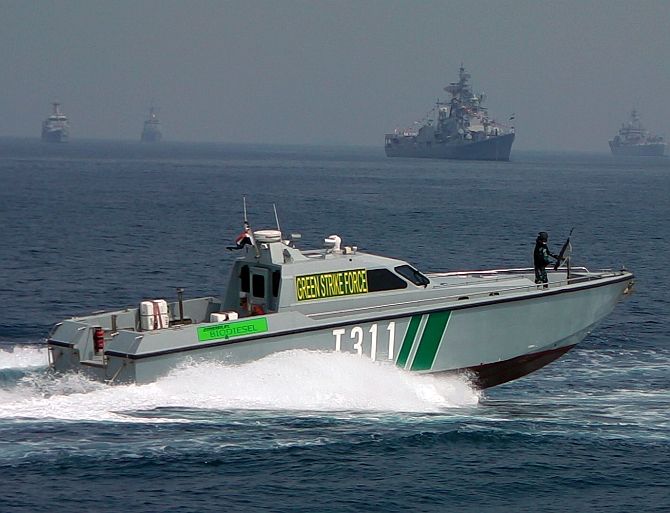 The bio diesel powered fast interceptor craft of the navy.

The navy also showcased its bio diesel powered fast interceptor craft. The FICs provide security cover within the inner harbour as well as approaches to the naval harbour.

The grey-coloured fibreglass-hulled sleek T 307 and T 311 have been developed by the Defence Institute of Bio Energy Research based at Haldwani.

The technology demonstrator is in line with the navy’s ambition to turn to bio-diesel fuel for its warships in future. 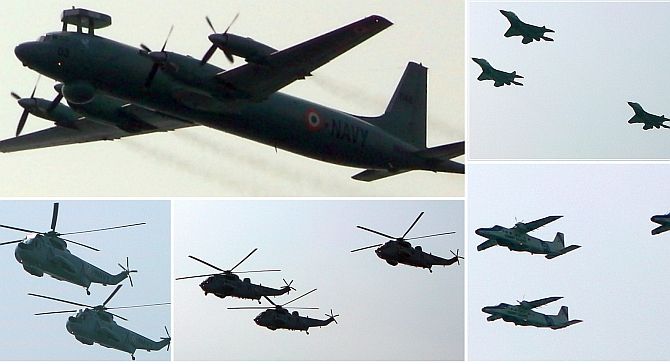 A combination image of the naval aviation's flypast

As the last of the ships sailed past, it was turn to look skyward for what would be fitting finale to the day’s proceedings.

A flypast comprising 15 formations of 45 aircraft, including two formations from the Indian Coast Guard, left the crowd spellbound and asking for more.

This display also showcased the latest acquisitions of the navy such as the Carrier Borne Strike Fighter MIG 29K, Long Range Maritime Reconnaissance aircraft, P8I and the AEW helicopter KM-31. 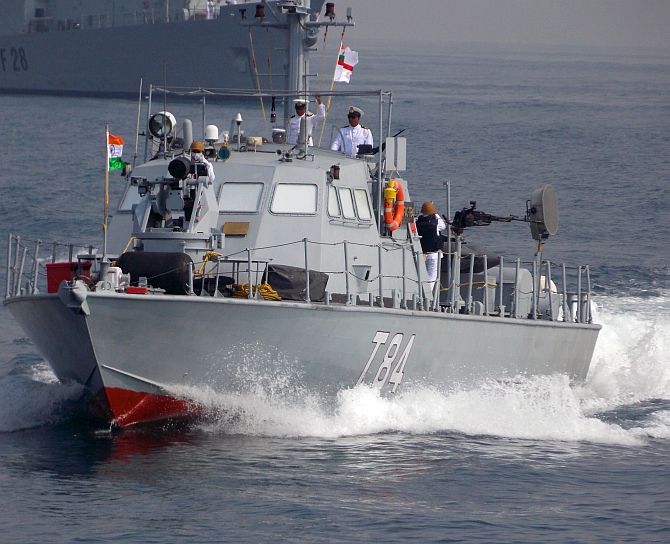 As the Sunayna sailed back to the dockyard, one couldn’t stop thinking how India’s naval prowess had grown over the years. As Admiral Dhowan pointed out, “The Indian Navy is now truly a builder's navy, not buyer's navy”.

United Through Oceans! That’s the message India sought to send across to the 50 navies from around the world that were taking part in the fleet review.

Over the course of five days, this message was delivered loud and clear. 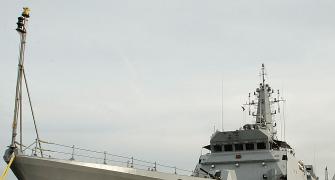 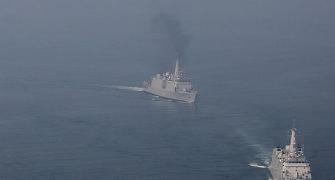 We are 'United through Oceans': President Pranab@IFR 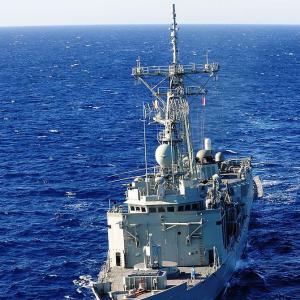