Defence forces to begin initial recruitment under Agnipath by next week

As protests against the Agnipath military recruitment scheme intensified, the Army, Navy and the Air Force on Friday announced that they will start the enrolment process under the new model by next week while Defence Minister Rajnath Singh appealed to the youths wanting to join the armed forces to start preparing for the induction. 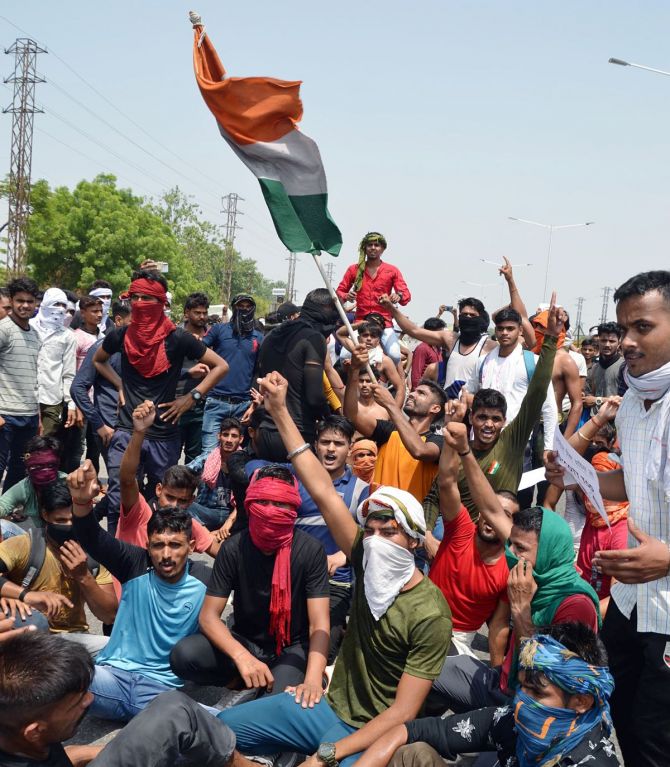 IMAGE: Protestors raise slogans during a demonstration against the Agnipath Recruitment Scheme for the Armed Forces, at the Agra-Delhi national highway, in Mathura on Friday. Photograph: ANI Photo

Air Chief Marshal V R Chaudhari told PTI that the selection process by the Indian Air Force for recruitment under the new scheme will start from June 24 while the Army said it will begin the initial exercise within two days.

While the Indian Navy said it will start the recruitment process 'very soon', a senior naval commander said the notification for the recruitment would be out within a week.

The three services are planning to deploy the first batches of recruits under the new scheme both in operational and non-operational roles by June next year, senior military officials said.

The officials also said the agitating youths are not fully aware of the benefits of the Agnipath scheme.

In an attempt to pacify the protesters, the government on Thursday night increased the upper age limit for recruitment for soldiers under the Agnipath scheme to 23 years from 21 for the year 2022.

Defence Minister Singh, on a two-day visit to Jammu and Kashmir, said the relaxation of the age limit indicates that the government cares for the youth and asserted that the model of recruitment is a 'golden opportunity' for those wanting to join the country's defence system.

He said the Department of Military Affairs, the Ministry of Defence and the three services are committed to commencing the recruitment process at the earliest and invited the youths to join the Indian armed forces and 'serve the nation through Agnipath'.

Unveiling the scheme on Tuesday, the government said youths between the ages of 17 and-a-half and 21 years would be inducted for a four-year tenure while 25 per cent of them will be subsequently inducted for regular service.

The youths to be recruited under the new scheme would be called 'Agniveer'.

A major objective of the scheme is to bring down the average age of military personnel and cut ballooning salary and pension bills.

The announcement of the new scheme came in the backdrop of recruitments into the military remaining stalled over the coronavirus pandemic for over two years.

As protests against the scheme widened, Army Chief General Manoj Pande said the government's decision to raise the upper age limit to 23 years for recruitment under the Agnipath scheme will provide an opportunity to those youths who could not join the services due to the COVID-19 pandemic in the last two years.

"The schedule of the recruitment process will be announced shortly. We call upon our youth to avail this opportunity for joining the Indian Army as Agniveers," Gen Pande said.

Air Chief Marshal Chaudhari said the raising of the upper age limit for the year 2022 would permit a larger section of youths to enrol under the new model of recruitment.

"The government has recently announced the 'Agnipath' scheme for enrolment in the armed forces. The age bracket for the scheme is 17-and-half-years to 21 years. I am pleased to inform you that the upper age limit for the first induction has been increased to 23 years," he said.

"This change would permit a larger section of the youth to enrol Agniveer. The selection process for the Air Force will start from Jun 24," he added.

In a statement, the Navy said the increase in the upper age limit would facilitate entry of those youth who could not join the armed forces due to a temporary stoppage of recruitment during the COVID-19 pandemic.

'The Indian Navy is ready to welcome the first batch of Agniveers in our service, for which the recruitment process will start very soon. We call upon all young men and women of our country to join the Indian Navy as Agniveers and contribute to national security and nation-building,' it said.

The military officials cited above said the Army will come out with an initial notification for the enrolment within two days.

After issuance of the initial notification, various agencies and establishments of the Army will subsequently come out with details of the induction process such as number of vacancies, location of recruitment rallies and test schedules considering a variety of factors, they said.

The officials said the Army has set its target of starting the training of new recruits under the Agnipath scheme by December, adding the plan is to deploy the initial batches in operational and non-operational roles by June next year.

Unveiling the scheme on Tuesday, the government said youths between the ages of 17 and-a-half and 21 years would be inducted for a four-year tenure while 25 per cent of them will be subsequently inducted for regular service.

The youths to be recruited under the new scheme would be called 'Agniveer'.

The monthly salary of an 'Agniveer' in the first year of employment would be Rs 30,000 and the in-hand amount would be Rs 21,000 as Rs 9,000 would go to a corpus with an equal contribution from the government.

Each 'Agniveer' will get an amount of Rs 11.71 lakh as 'Seva Nidhi Package' and it will be exempted from income tax.

The four-year tenure under the new scheme will include around two-and-half months to six months of training periods.