Maharashtra minister Nawab Malik on Tuesday told the Bombay high court that the defamation suit filed against him by Dhyandev Wankhede, father of Narcotics Control Bureau zonal director Sameer Wankhede, was only an attempt to cover up the 'illegalities' committed by the IRS officer and claimed none of his statements against them was false. 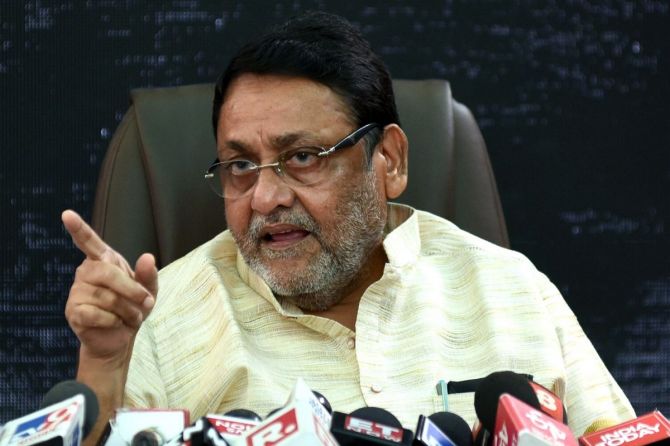 Malik submitted an affidavit in the HC in response to the defamation suit filed by Dhyandev Wankhede, seeking damages to the tune of Rs 1.25 crore and also an order restraining the Nationalist Congress Party leader from making any false or incorrect statements against the Wankhede family that would defame or harm their reputation.

The minister, in his affidavit, however, said none of the statements made by him was incorrect and that the evidence produced by him has in fact helped the government machinery take corrective steps against Sameer Wankhede, who had been handling some high-profile drugs case till recently, including the one in which Bollywood actor Shah Rukh Khan's son Aryan is an accused.

“Sameer Wankhede is facing vigilance inquiry and the director of the NCB has transferred a total of six cases from its Mumbai unit headed by zonal director Sameer Wankhede to its unit in Delhi,” the affidavit said.

“Thus, initiation of action against Sameer Wankhede shows the authenticity of evidence produced by the defendant (Malik),” the NCP leader said, adding being a public representative he was only trying to expose the 'illegalities' committed by Sameer Wankhede, a civil servant.

“The plaintiff (Dhyandev Wankhede), by filing the present suit, is trying to curtail the freedom of expression granted to the defendant under Article 19 of the Constitution of India, which the defendant uses for public good,” the affidavit said.

It added that the defamation suit was nothing but an attempt to cover up the 'illegalities' committed by the plaintiff Dhyandev Wankhede's son Sameer Wankhede.

Malik sought dismissal of the defamation suit and said it was not maintainable as the plaintiff was seeking reliefs not just for himself but also his family members.

The NCP leader, who has levelled a series of allegations against Sameer Wankhede -- ranging from forgery to lying about his religion -- said the plaintiff cannot file a representative suit on behalf of his family members.

“The family members of the plaintiff have not initiated any legal proceedings controverting the evidence produced by the defendant (Malik),” the affidavit said.

The 62-year-old politician said he has not made any false statements and has produced documentary evidence to support his claims.

“In the circumstances, it is humbly submitted that the authenticity and admissibility of the evidence produced by the defendant can be decided only at the stage of trial,” the affidavit said.

It added that Dhyandev Wankhede has failed to produce any documentary evidence in support his claims in the suit that the statements made by Malik are incorrect.

“I (Malik) have produced the birth certificate of Sameer Wankhede, son of the plaintiff to show that Sameer Wankhede is a Muslim by birth and that he has secured a government job by falsely claiming to be from a Scheduled Caste,” the affidavit said.

It added that as per the birth certificate, which has been issued by the municipal corporation, the name of Sameer Wankhede's father is shown as Dawood Wankhede and religious identity as Muslim.

It further said the plaintiff has failed to show as to how the statements made by Malik were derogatory or defamatory.

The minister further said several other persons, including a witness in the drugs-on-cruise case, have made allegations of attempts of extortion against Sameer Wankhede, a 2008-batch IRS officer.

A vacation bench of Justice Madhav Jamdar is scheduled to hear the suit on Wednesday.

The suit has sought an order declaring Malik's statements as defamatory in nature and a permanent injunction restraining the NCP leader from publishing or making statements before the media, including his social media accounts.

The suit has stated that the statements by Malik that Wankhede is a Muslim amounted to questioning the religious beliefs of the family by disputing they are not Hindus.

It claimed that Malik's statements caused an irreparable loss, damage, harm, prejudice to the name, character, reputation and societal image of the Wankhede family.

The suit also sought directions to the state minister to take back all defamatory statements made by him so far and also to delete his tweets posted against the plaintiff and his family members.

Sameer Wankhede had last month led a raid on a cruise ship off the Mumbai coast after which the NCB claimed to have seized drugs onboard.

Shah Rukh Khan's son Aryan and 19 others were later arrested in connection with the cruise drugs case. Some of the accused, including Aryan Khan, are currently out on bail.

Malik has repeatedly termed the cruise drugs case as 'fake' and levelled a string of allegations against the IRS officer, who has denied his charges.