A case has been registered against temple authorities as permission for firecrackers was denied. IMAGE: The hand of a devotee who died when a fire broke out at the Puttingal Devi temple, is seen outside the mortuary of a hospital in Kollam. Photograph: Sivaram V/Reuters

In one of the worst tragedies to hit Kerala, at least 106 people were killed and 383 injured in a devastating fire that engulfed the 100-year-old Puttingal Devi Temple complex near Kollam during an unauthorised display of fireworks early on Sunday.

A late night statement issued by the chief minister’s office said 106 people had lost their lives in the incident that left 383 others with injuries.

A judicial probe by a retired high court judge was ordered by the state government along with an investigation by Crime Branch into the tragedy, Chief Minister Oommen Chandy announced after an emergency Cabinet meeting over the tragedy. 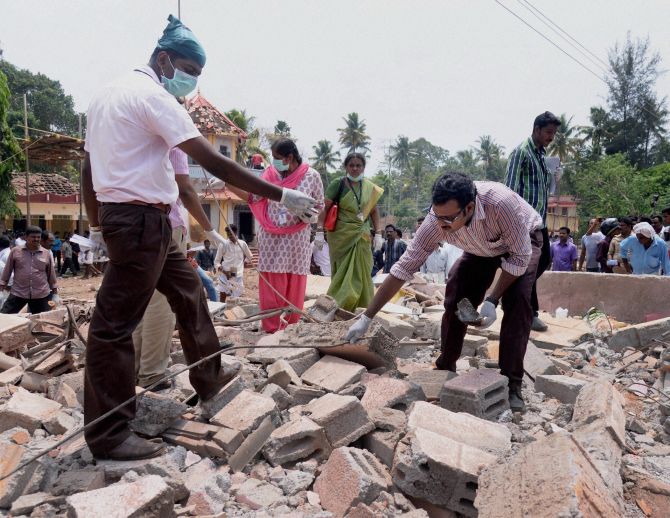 IMAGE: Hundred people were killed and many more were injured when a spark from an unauthorized fireworks show ignited a separate batch of fireworks that were being stored at the temple complex. Photograph: PTI

The tragedy struck around 3.30 am during a display of fireworks at the temple complex, which is around 70 kilometre from the state capital Thiruvananthapuram.

The fireworks, for which no permission had been granted by revenue and police officials, had started at midnight as part of an annual festival and thousands of people had gathered to witness it.

The mishap occurred as sparks of the fireworks fell on the store room ‘Kambapura’ and the fire crackers kept there exploded with a deafening noise, police said.

The blaze spread quickly trapping the devotees within the complex. Charred bodies and human remains were strewn around the temple complex after the fire tragedy. “It was complete chaos,” eyewitnesses said. 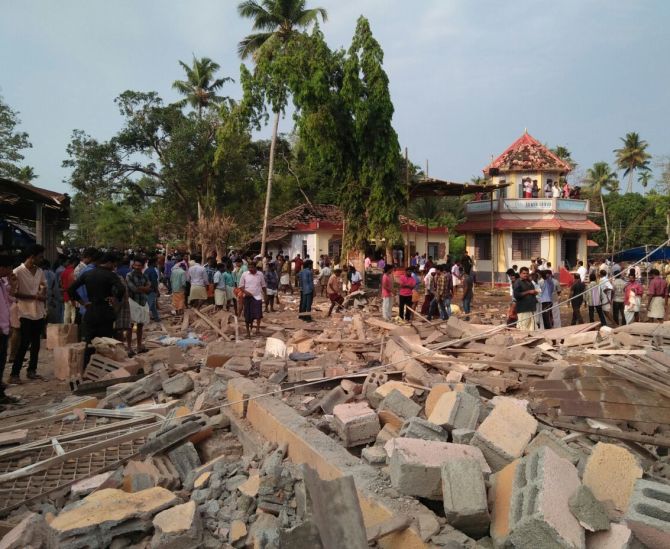 IMAGE: The site of the fire at the Kollam temple. The sound of the explosion could be heard over a radius of one kilometre. Photograph: Chandru, TVM

The explosions also ripped chunks of concrete and plaster from the temple and nearby buildings which fell on people killing some on the spot and wounding many others.

The official statement said 75 bodies have been identified and 84 post-mortems had been conducted.

Scientific examination would be done to identify bodies which have not yet been claimed, Chandy said.

Chandy also announced ex-gratia relief of Rs 10 lakh to kin of each of those killed in fire tragedy, Rs 2 lakh for seriously injured and Rs 50,000 for those with minor injuries.

Prime Minister Narendra Modi, who termed the incident as “heart-rending” and “shocking”, announced Rs two lakh each as compensation for the next of the kin of the dead and Rs 50,000 each for the injured. He later flew in and took stock of the situation and see the injured people.

The sound of the explosion could be heard over a radius of one kilometre and the whole area plunged into darkness as the power supply went off and people ran helter-skelter, eye-witnesses said.

The chief minister said the District Collector of Kollam had not given permission to conduct the fireworks.

District Collector A Shainamol said “no permission for any kind of fireworks” was given.

She said the temple authorities had asked for permission to conduct competitive fireworks which was denied. For normal fireworks, no permission was sought and hence there was no question of granting it, the DC said. 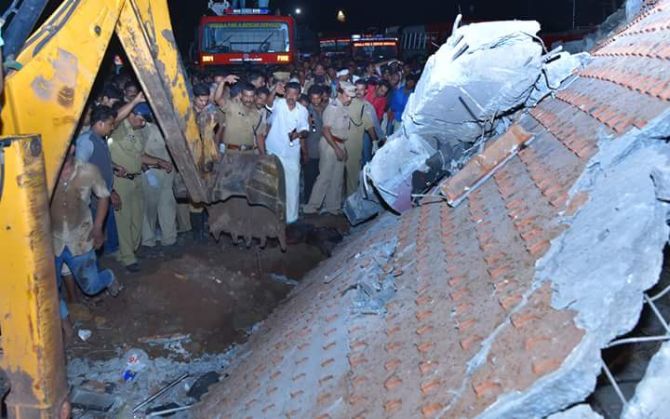 IMAGE: Visuals at the temple after the fire broke out. Officials said the fire has been put out and focus was on providing treatment to the injured. Photograph: Chandu, TVM

Kerala Home Minister Ramesh Chennithala said, “Actually, it is not a police failure,” on being asked why police had not stopped the fireworks since it was not permitted.

“When lakhs of people are assembled here, if there is police action, it will have another problem. So, we have to consider all these aspects,” he said.

Police sources said a case has been registered against temple authorities and explosive licencees under section 307 (attempt to murder), and 308 (attempt to commit culpable homicide) of the Indian Penal Code and under section 4 of Explosives Substances Act.

Congress vice-president Rahul Gandhi, who rushed to Kollam, appreciated the “swift and decisive” response of the Kerala government to the incident.

Stunned people saw smoke billowing from the temple even as crackers continued to explode for quite some time. Anxious relatives were seen trying to locate their near and dear ones among the bodies, some of which were charred beyond recognition.

People with head and burn injuries, fractures and blood dripping from their wounds were seen being rushed to hospitals.

The Centre rushed the Chief Controller of explosives safety organisation PESO to check if there was illegal usage of crackers or explosives at the temple in Kollam.

Meanwhile, the 15-member temple committee, which was in the precincts, when the mishap occurred, went missing soon after the incident, local people said. 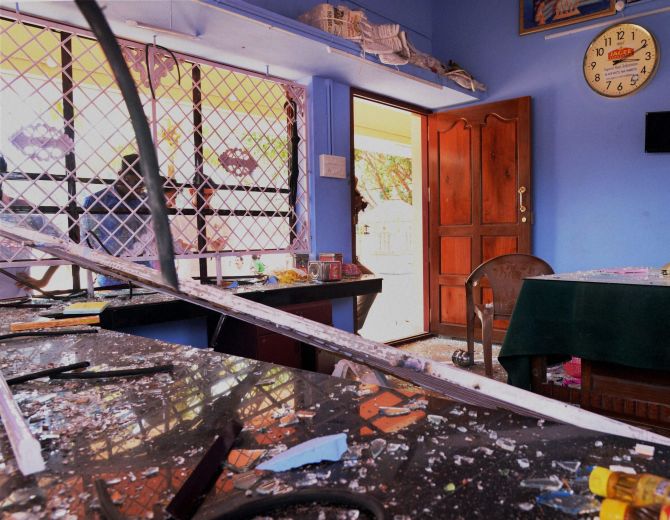 IMAGE: A view of a collapsed building after a massive fire broke out during a fireworks display in Paravoor north of Thiruvananthapuram. Photograph: PTI

As tragedy struck, a massive effort was launched to rescue the people from the inferno and shift the injured people to hospitals, with the Navy and the Air Force pressing into service six helicopters and one Dornier aircraft.

Raju, a local resident staying near the temple, said he heard a massive explosion and saw a huge ball of fire.

A large number of people died when concrete chunks and iron grills from the structures fell on those who had gathered to watch the festivities, said another eyewitness Vijayan.

Girija, whose house is situated about a kilometre away from the temple, said she felt tremors soon after a massive explosion.

Chandy said the state government had sought permission from the Election commission in the morning for necessary sanction to exclude treatment facilities to the injured from the ambit of the Election Code of Conduct and it had been received in principle.

“We will inform them of today’s decisions,” he said, adding, “Strong measures are needed to regulate such fireworks display and everyone should cooperate. This accident should be an eye-opener. Strong guidelines have to brought in and steps taken to ensure that it is implemented,” Chandy said.

Chandy promised best medical treatment to the injured people and said they would be shifted to whichever hospitals their relatives wanted. “The government will take care of all the medical expenses,” he said.

“The condition of some of the injured is stated to be very serious and the injured have been admitted to various hospitals in and around Kollam and in Thiruvananthapuram,” the Kerala chief minister said.

The PM said the Centre would make all arrangements if any of the injured needs to be shifted to hospitals in Delhi, Mumbai or any other place. 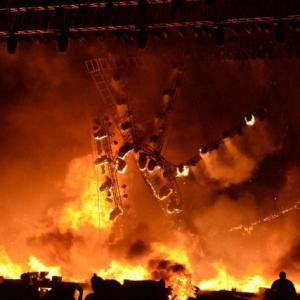 FIR against Wizcraft for 'negligence' over Make in India fire 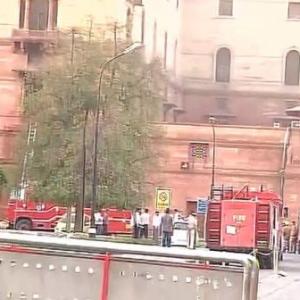