Farmer leaders on Saturday said the protesting unions stand firm on their demand of a complete repeal of the three agri laws and asserted that they are ready for talks with the government, but that should be held without any condition. IMAGE: Farmers during Kisan Ekta Morcha to mark the 100th day of the ongoing protests against the new farm reform laws, at KMP Expressway near Kundli in Haryana, on Saturday. Photograph: PTI Photo

Earlier in the day, thousands of farmers blocked the Kundli-Manesar-Palwal (KMP) Expressway at some places in Haryana to mark the completion of 100 days of their agitation at the Delhi borders.

Darshan Pal, a senior member of the Samkyukta Kisan Morcha which is spearheading the going protest, said farmer unions stand firm on the demand of repeal of three agri laws.

"Since the beginning of our agitation, our demand remains the same which is the repeal of three new agricultural laws. We are ready to resume talks with the government, but it should be held without any precondition," Pal told PTI.

In January, the government had proposed to suspend the three contentious farm laws for 1-1.5 years and set up a joint committee to find an amicable solution in the interest of the farming community, which the protesting unions had then rejected it.

Another senior farmer leader Kulwant Singh Sandhu said farm unions have never said 'no' to talks with the central government, adding that their stand on talks as well as demands have been the same from the beginning.

He said the Samkyukta Kisan Morcha has called a meeting on March 9 to decide the next course of action to intensify their ongoing agitation.

"Everyday, more people are joining the farmers' protest. There are over 1.25 lakh people at the four border points here in the capital itself," Sandhu claimed.

Abhimanyu Kohar, another farmer leader, said farmers are always ready to holds talks with the government.

"In democracy, any solution would come only through talks. But those in power should send us a formal invite -- just like they did during the earlier rounds of talks. Talks with terms and conditions from the government's end is not a solution and won't serve any purpose," Kohar told PTI.

During the blockade of KMP expressway on Saturday, farmers holding black flags and wearing black armbands and some women protesters with black 'dupattas' shouted slogans against the BJP-led government for not acceding to their demands.

Protesters in Sonipat and Jhajjar districts and some other places brought their tractor-trolleys and other vehicles and parked them in the middle of the KMP Expressway in some stretches.

Thousands of farmers, mostly from Punjab, Haryana and western Uttar Pradesh, have been camping at the Delhi border points -- Singhu, Tikri and Ghazipur -- for over three months, demanding the repeal of farm laws and a legal guarantee on the minimum support price for their crops.

The protesting farmers have expressed apprehension that these laws would pave the way for the dismantling of the minimum support price (MSP) system, leaving them at the 'mercy' of big corporations.

Agriculture Minister Narendra Singh Tomar on Saturday said the government is ready to amend three new farm laws to respect the sentiments of protesting farmers, even as he attacked opposition parties for doing politics on this issue at the cost of agriculture economy and by hurting farmers' interest.

Addressing the 5th national convention of Agrivision in New Delhi, the Union minister said the government has held 11 rounds of talks with farmer unions and has even offered to amend these laws.

Tomar said the government has passed these three laws to boost investment in the farm sector and give freedom to farmers to sell their produce wherever they want and at price determined by them.

The laws, which were passed by Parliament in September last year, would also enable to grow those crops that can fetch more prices in the market, he added.

Referring to the ongoing farmers' agitation, Tomar wondered how this agitation was going to benefit farmers.

"Main ye manta hoon, loktantra mein asahmati ka apna sthan hai, virodh ka bhi apna sthan hai, matbhed ke bhi apne mahatva hai. Lekin kya virodh is keemat par kiya jaana chahiye, jo desh ka nuksan kare (There is a place for disagreement in democracy and so is for opposition and difference of opinion, but should there be any opposition that can harm the nation)," he said.

No one is ready to talk on how these protests can be in the interest of farmers, the minister said.

Tomar regretted that farmer unions as well as the Opposition parties have failed to point out faults in provisions of these laws.

Tomar stressed that the government's proposal to amend laws does not mean that there were any deficiencies in these reform laws.

He said the government has made a proposal to amend these laws as farmers continue to be the face of this ongoing protest.

Stating that the Centre under the leadership of Prime Minister Narendra Modi is committed to farmers' welfare, Tomar said the government's priority is to upheld farmers respect and therefore, it is ready to make amendments in the laws.

The minister said there are always an opposition to big reforms, but people do accept changes if the intention and policies are correct.

The Supreme Court had on January 12 stayed the implementation of the three contentious farm laws for two months and asked the committee to submit a report after consulting the stakeholders.

The three laws are -- The Farmers' Produce Trade and Commerce (Promotion and Facilitation) Act, 2020, The Farmers (Empowerment and Protection) Agreement On Price Assurance and Farm Services Act, 2020 and The Essential Commodities (Amendment) Act, 2020. 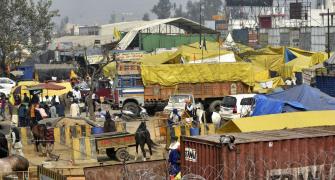 Farmers' stir: Why crowd is thinning at Delhi borders