Over 1.90 lakh beneficiaries were inoculated with COVID-19 jabs at 3,352 session sites across the country on Saturday and no case of post-inoculation hospitalisation has been reported so far, the government said on the first day of India's massive vaccination drive against the virus. 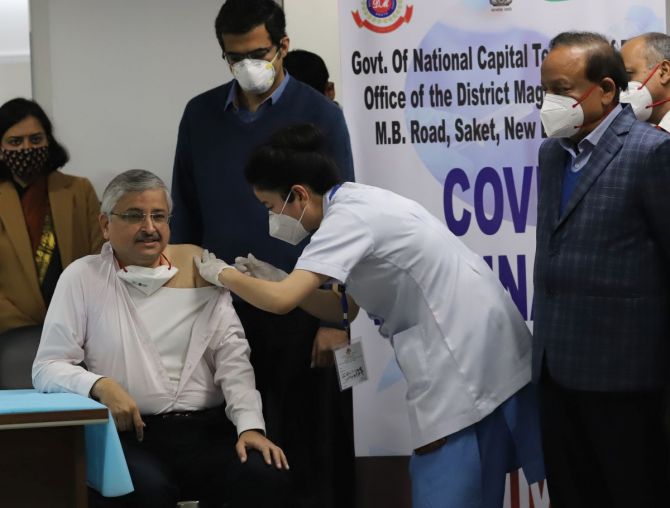 The COVID-19 vaccination drive was successfully conducted on the first day, Additional Secretary in the Union health ministry Manohar Agnani said during a press briefing.

A total of 16,755 personnel were involved in organising the vaccination sessions, Agnani said.

Prime Minister Narendra Modi launched the vaccination drive while reassuring the country that emergency use authorisation was given to two made in India vaccines only after scientists were convinced of their safety and effectiveness, and urged people to beware of propaganda and rumours.

More than one crore cases and 1.5 lakh fatalities later, India took its first steps out of the pandemic with shots of the Covishield and Covaxin vaccines being administered at medical centres across the country.

Sanitation worker Manish Kumar became the first recipient of the vaccination drive at Delhi's All India Institute of Medical Sciences (AIIMS), according to the health ministry.

The sessions in states where Covishield was administered: two sessions in Andaman and Nicobar, 332 in Andhra Pradesh, nine in Arunachal Pradesh, four in Chandigarh, 97 in Chhattisgarh, one each Dadra and Nagar Haveli and Daman and Diu, seven in Goa, he said.

Covishield was administered in 161 sessions in Gujarat, 28 sessions in Himachal Pradesh, 41 in Jammu and Kashmir, 48 in Jharkhand and 133 from Kerala, two in Ladakh, one in Lakshadweep, 150 in Madhya Pradesh, 10 each in Manipur and Meghalaya, five in Mizoram, nine in Nagaland, eight in Puducherry, 59 in Punjab, two in Sikkim, 18 in Tripura, 34 in Uttarakhand and 183 in West Bengal.

Some of the issues faced on the first day of vaccination were delay in uploading of beneficiary lists at some session sites whose resolution was done by improving system performance and speed, Agnani said.

Another issue faced was that some healthcare workers vaccinated though not scheduled for Saturday's session whose resolution he said was reached by process evolution and states were advised to upload details of such healthcare worker in Co-WIN database.

The ministry has said each vaccination session will cater to a maximum of 100 beneficiaries per day and has advised states not to organise 'unreasonable numbers of vaccination per site per day'.

Further, states and union territories have been advised to utilise a maximum of 10 days in a fortnight for COVID-19 vaccination.

According to official sources, 95 people were vaccinated at AIIMS on Saturday while 31 people got vaccinated at Ram Manohar Lohia (RML) Hospital and no side affects have been reported in any of the beneficiaries.

According to the government, the shots will be offered first to an estimated one crore healthcare workers, and around two crore frontline workers, and then to persons above 50 years of age, followed by persons younger than 50 years of age with associated comorbidities totally estimated to be around 27 crore.

Cost of vaccination of healthcare and frontline workers will be borne by the central government.