Daughters to get preference in inheriting intestate Hindu's property: SC

In a significant verdict, the Supreme Court on Thursday said the daughters of a male Hindu, dying intestate, would be entitled to inherit the self-acquired and other properties obtained in the partition by the father and get preference over other collateral members of the family. 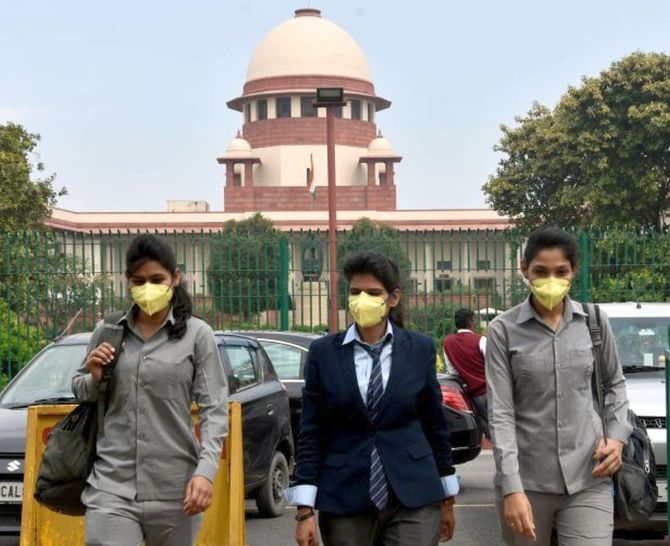 The judgment, which came on an appeal against the Madras high court verdict, dealt with the property rights of Hindu women and widows under the Hindu Succession Act.

'If a property of a male Hindu dying intestate (without a will) is a self-acquired property or obtained in the partition of a coparcenary or a family property, the same would devolve by inheritance and not by survivorship, and a daughter of such a male Hindu would be entitled to inherit such property in preference to other collaterals (such as sons/daughters of brothers of deceased father),' a bench of justices S Abdul Nazeer and Krishna Murari said.

The bench was dealing with the legal issue concerning the right of the daughter to inherit the self-acquired property of her father, in the absence of any other legal heir.

Justice Murari, writing the 51-page judgment for the bench, also dealt with the question of whether such property will devolve on to the daughter upon the death of her father, who died without a will, by inheritance or shall devolve on to 'father's brother's son by survivorship'.

'Right of a widow or daughter to inherit the self-acquired property or share received in the partition of a coparcenary property of a Hindu male dying intestate is well recognized not only under the old customary Hindu Law but also by various judicial pronouncements...,' the verdict said.

Referring to the legal provision, it said the legislative intent was to remedy the limitation of a Hindu woman who could not claim an absolute interest in the properties inherited by her but only had a life interest in the estate so inherited.

'Section 14 (I) converted all limited estates owned by women into absolute estates and the succession of these properties in the absence of a will or testament would take place in consonance with Section 15 of the Hindu Succession Act, 1956...,' it said.

'The basic aim of the legislature in enacting Section 15(2) (of the Hindu Succession Act) is to ensure that inherited property of a female Hindu dying issueless and intestate, goes back to the source,' it said.

Dealing with the facts of the case, the bench set aside the trial court and the high court's findings dismissing the partition suit of the daughters.

The apex court said, '...since the property in question was admittedly the self-acquired property of a father despite the family being in a state of jointness upon his death intestate, his sole surviving daughter will inherit the same by inheritance and the property shall not devolve by survivorship.'

'Thus, the impugned judgement and decree dated March 01, 1994, passed by the Trial Court and confirmed by the high court vide judgment and order dated January 21, 2009, are not liable to be sustained and are hereby set aside,' it said.