Home Minister Amit Shah on Thursday spoke to the chief ministers of Tamil Nadu and Kerala ahead of cyclone Burevi that is expected to hit the two states later on Thursday. 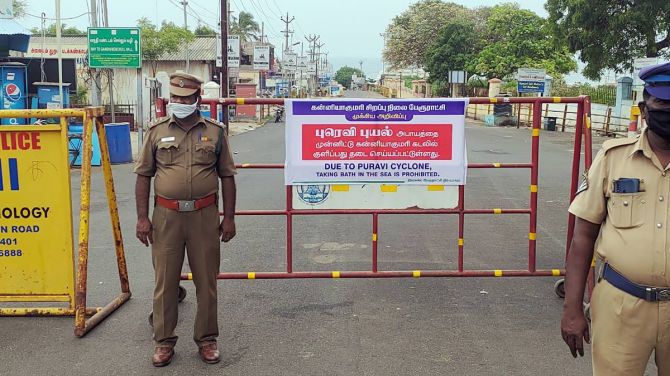 IMAGE: Police personal blocking the beach road with barricades to stop people as a preventive measure ahead of cyclone Burevi in Kanyakumari. Photograph: ANI Photo

"Have spoken to Tamil Nadu CM Edappadi K Palaniswami and Kerala CM Pinarayi Vijayan in the wake of Cyclone Burevi. Modi government is committed for all possible support to help people of Tamil Nadu and Kerala. Several teams of National Disaster Response Force are already deployed in both the states," Shah tweeted.

Meanwhile, teams of the NDRF have reached several places in Tamil Nadu and Kerala as the two states brace themselves for cyclone Burevi.

DS Khushwaha, a member of the fourth battalion of the NDRF, said that the teams were well equipped and ready to take on any natural calamity that may occur.

"A total of eight teams have been deployed. The India Meteorological Department issued a red alert here in Thiruvananthapuram so for the last two days, we have been checking areas prone to landslide and floods. NDRF workers are also present at the coast. We will be able to reach quickly and swiftly in case any disaster occurs. We are ready for any disaster and well equipped," Khushwaha said.

Earlier on Tuesday, a cyclone alert was issued by the IMD for South Tamil Nadu and south Kerala coasts. The cyclonic storm with a wind speed of 70-80 gusting to 90 kmph would be centered very close to Pamban around noon on Thursday.

It is likely to emerge on the gulf of Mannar on Thursday and cross south Tamil Nadu between Kanniyakumari and Pamban on December 4 early morning.

Thus its impact on south Tamil Nadu coastal districts is very likely to commence from 3 December forenoon initially over Ramanathapuramdistrict and gradually towards Kanniyakumari district. 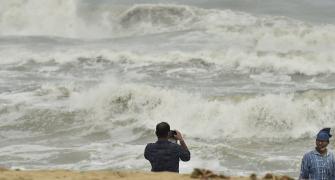