Source: PTI
Last updated on: December 01, 2010 18:04 IST
Facing stinging observations by the Supreme Court, controversial Central Vigilance Commissioner P J Thomas on Wednesday offered to recuse himself from supervising the Central Bureau of Investigation probe into the 2G spectrum allocation case but made it clear that he was not going to resign.

"In accordance with the highest tradition, Thomas has offered to recuse himself from the matter," Solicitor General Gopal Subramanium told a Supreme Court bench comprising

justices G S Singhvi and A K Ganguly which had on Tuesday questioned the Central Vigilance Commissioner supervising the CBI probe.

Sticking to its demand that Thomas step down as CVC, the opposition said his offer to recuse himself was an attempt by the government to "bail him out".

The 60-year-old Thomas, who was telecom secretary till recently, was appointed to the CVC's post by a three-member panel headed by Prime Minister Manmohan Singh but not before the Leader of the Opposition in the Lok Sabha Sushma Swaraj, gave a dissenting note.

Appointed barely less than three months ago, his name figures in the chargesheet relating to import of palmolein when he was serving in the Kerala government.

Seeking to scotch reports that he will resign on Wednesday, Thomas told reporters outside his office here, "The government has appointed me as CVC. I am continuing as CVC."

"The matter is sub judice. It is better not to comment. Whatever proceedings is in the court it is unfair for me to comment," Thomas said when asked about the apex court

Asked whether he has offered to resign, Thomas who had met Union Home Minister P Chidambaram on Monday said, "I am still continuing as CVC. If there is anything I will let you know."

"I was appointed by the government taking into consideration all these (matters). There is no controversy. There is some old case in which Supreme Court stay is there. These are judicial matters which will be settled. Law will take its own course," the CVC said.

Replying to a question about his name figuring as an accused in the chargesheet in the palmolein import case, Thomas said, "After all this, the government had  appointed me

as CVC and I am still continuing as CVC."

The Supreme Court had on Tuesday raised questions on Thomas's ability to supervise the CBI investigations in the 2G case. It would be difficult for Thomas to objectively monitor

the investigations, it had said.

The court had said, "The CBI is functioning under the CVC. At that time, he (Thomas)

was functioning as telecom secretary. It would be difficult for him to objectively monitor."

"He had justified the action which are being subjected to scrutiny by this court and the CBI. It would be difficult for him to objectively supervise," the bench had said. 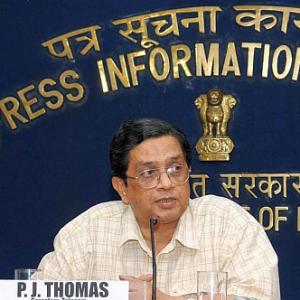