Curfew imposed on Guwahati and parts of Dibrugarh district in the wake of the violent protests against the amended Citizenship Act was relaxed on Sunday for several hours, police said. 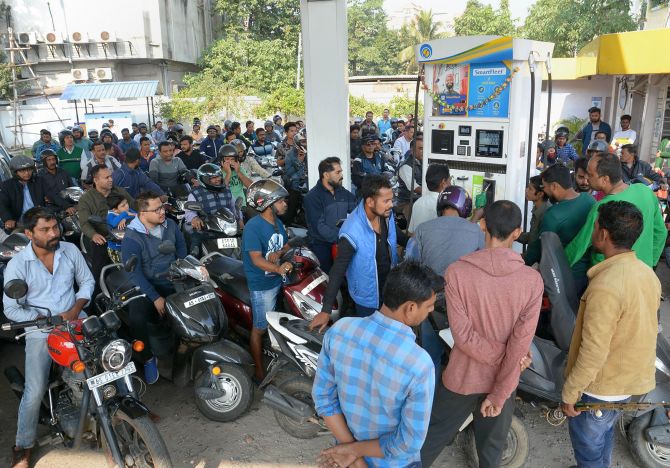 IMAGE: People queue up at a petrol pump after curfew was relaxed in Guwahati. Photograph: PTI Photo

Special trains have been arranged by the Assam tourism department in association with the railways to ferry passengers stranded in various parts of the state.

Six flights, however, had to be cancelled, including one to Paro in Bhutan, in view of the law-and-order situation, an official of Airports Authority of India in Guwahati said.

Long queues were seen outside grocery shops at several places, including Dispur, Uzan Bazar, Chandmari, Silpukhuri and Zoo Road in Guwahati town. Auto-rickshaws and cycle-rickshaws were plying across the city since morning.

Petrol pumps have also opened with vehicles waiting in lines to refuel. Police were using loudspeakers to inform the public about the relaxation.

AGP members in Parliament had voted in favour of the contentious bill.

Violent protests had erupted in the city and other parts of the state earlier this week after the Citizenship (Amendment) Bill was passed in Parliament, with agitators engaging in pitched battles with the police, forcing the administration to impose curfew. The signs that are shaping the Assam protests