News
Business
Movies
Sports
Cricket
Get Ahead
Money Tips
Shopping
Sign in  |  Create a Rediffmail account
Rediff.com  » News » Curfew in many parts of Kashmir valley ahead of Hurriyat march

Curfew in many parts of Kashmir valley ahead of Hurriyat march

Source: PTI
October 18, 2010 13:46 IST
Curfew was on Monday clamped in several parts of Kashmir Valley ahead of a planned march by hardline Hurriyat activists to Palhallan town of Baramulla district.

The areas of Srinagar placed under curfew include police station in the jurisdiction of Rainawari, Nowhatta, Khanyar, MR Gunj, Safakadal, Parimpora, and police division Qamarwari and Bemina, a police spokesman said.

Curfew has also been imposed in Pampore town of Pulwama district in south Kashmir and Baramulla, Sopore, Kupwara and Handwara towns in north Kashmir.

However, there are no curfew restrictions in Budgam, Ganderbal, Anantnag, Kulgam, Pulwama, Shopian, and Bandipora districts, he said.

The hardline Hurriyat Conference had proposed to take out a march to Palhallan town, 31 km from Srinagar, where 11 persons have been killed during the four-month long protests.

Normal life remained affected in the Valley on account of the general strike called by the Syed Ali Shah Geelani-led Hurriyat.

Shops, business establishments, private offices, petrol pumps and most of the banks in the commercial hub of Lal Chowk and adjoining areas remained closed due to the strike, while public transport remained off the roads.

However, some private vehicles could be seen plying on the roads in areas where curfew restrictions have not been imposed. Many shops in uptown civil lines areas were open. 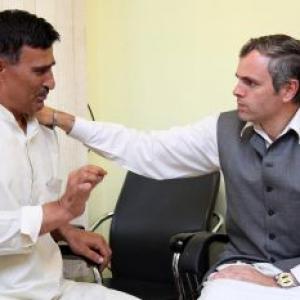