Nine people were injured on Wednesday, as people defying restrictions hurled stones at security forces in two districts of Jammu and Kashmir prompting them to open fire while the Valley remained largely peaceful despite a call by separatists for a protest march.

The day-long clashes which took place at Kreeri in Baramulla distict where people were protesting against the alleged "custodial death" of a youth and at Konibal in Pulwama district, left nine people injured out of which two have received bullets and are undergoing treatment at different hospitals, officials said.

Five people including two policemen were injured in the clashes during which police fired warning shots, burst teargas shells and used batons, the sources said adding one of the injured identified as Fayaz Ahmad was hit by a bullet and his condition was stated to be "stable".

Similar clashes were reported from Konibal in Pulwama district when people tried to march towards the curfew-bound Pampore town. Four persons were injured in the clashes and one of them Tariq Ahmad Bhat, who was hit by a bullet in the right shoulder, was admitted in SMHS hospital, the sources said.

As the day started, thousands of people joined the funeral procession of 19-year-old Syed Fark Bukhari at Kreeri, 35 km from Srinagar.

The body of Bukhari, who went missing allegedly while in police custody since July 28, was recovered from a nearby stream last evening.

Although police registered a "murder" case and assured "professional and transparent" investigation in the case, the locals clashed with police and paramilitary forces shortly after laying the deceased to rest.

However, in the rest of the Valley, the police and the paramilitary forces strictly enforced curfew and restrictions to scuttle the attempts by separatists to take out a march.

Hardline faction of Hurriyat Conference headed by Syed Ali Shah Geelani, which is spearheading the ongoing agitation for withdrawal of troops from the valley, had called for a march to Pampore, 16 km from here, in connection with the second death anniversary of slain People's League chairman Sheikh Abdul Aziz.

Fearing trouble, the authorities placed Geelani under house arrest on Tuesday evening as a preventive measure and also extended the curfew, which is imposed in Sriangar for the past two days, to Pampore, Kakapora and Pulwama in South and Sopore in North besides asking police and paramilitary forces to strictly enforce restrictions in other towns of the Valley.

The security personnel were maintaining a vigil as barricades were placed to restrict movement in certain places, the sources said. 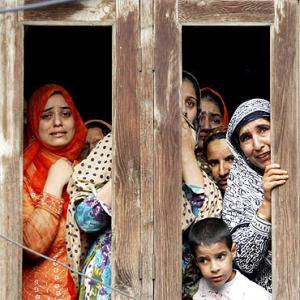 Why a political solution will NOT work in Kashmir 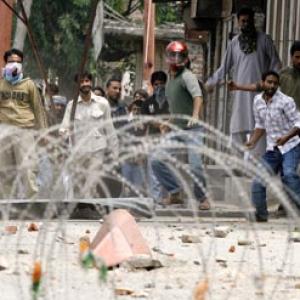