Central Reserve Police Force commander Chetan Cheeta, who had slipped into coma after being shot nine times during an encounter with terrorists in Kashmir, has made a “miraculous” recovery and was discharged from AIIMS on Wednesday. 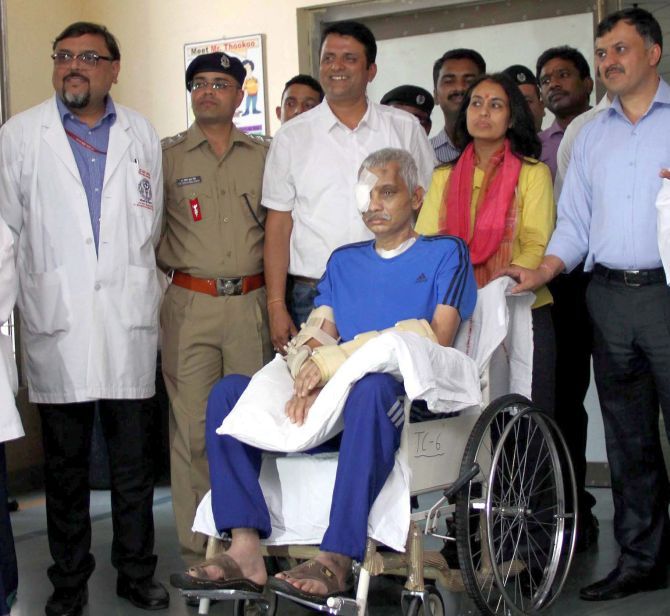 Cheeta was first wheeled in on February 14 at the trauma centre of the premier medical institute after being airlifted from Srinagar. Doctors attending to him said he has shown a steely resolve to respond to their intensive medical care that went on for close to about two months.

Professor of Trauma Surgery at the AIIMS Subodh Kumar, while announcing his recovery in an interaction with journalists, said it was “nothing short of a miracle”.

“Cheeta was in coma for 16 days and spent a month in the Intensive Care Unit. He was discharged today,” Amit Gupta, Additional Medical Superintendent at the AIIMS Trauma Centre, said.

Gupta said the Commanding Officer of the CRPF’s 45th battalion in Kashmir Valley had suffered bullet injuries in his brain, right eye, abdomen, both arms, left hand and in the buttock region.

According to doctors, the hope for vision returning to Cheeta’s right eye is “bleak” although his left eye which was also injured due to splinters has been restored.

“When he was brought in, he was in a coma, had bullet injuries in his head, badly fractured torso and the globe of his eight eye had ruptured,” Gupta said.

Describing the treatment provided to him over the last 1.5 months, Subodh said within 24 hours of admission, surgery was conducted to remove a portion of the skull which had bullet injury. After that he underwent multiple surgeries.

“Cheeta also developed signs of sepsis due to his wounds which was managed by critical care specialists in ICU. His wounds were regularly debrided,” Subodh said.

The CO’s wife, Uma Singh, who has been besides her husband since the near-fatal encounter, said the journey is not yet over and the final reward for her would be the day when her husband would don his uniform and go to work.

“Doctors would say he was in coma, but whenever I would meet him and hold his hands, he would respond by moving his fingers. That strengthened my faith that he was coming back to me,” she said.

Cheeta, who hails from Rajasthan, bore the initial brunt of the militant encounter in Hajjan area on February 14 where a joint team of army, CRPF and state police had laid siege following intelligence inputs that two foreign terrorists were hiding in the area.

Cheeta was commanding the 45th Battalion of the CRPF.

He was initially taken to the base hospital in Srinagar where he was operated upon and given primary treatment after which he was shifted using an air ambulance to the AIIMS Trauma Centre at 7.30 pm the same day.

Doctors said he was shifted to ward on March 16 where he underwent rehabilitation in the form of physiotherapy and speech therapy with a total ICU stay of 30 days.

Subsequently, they said, the wounds were covered with skin grafting by the plastic surgery team.

“His comeback to normal life has shown the true grit of a warrior,” Anurag Srivastava, Chief of AIIMS Trauma Centre, said.

Home Minister Rajnath Singh took to Twitter to hail the courage of the officer and said he wants to see Cheeta back in action.

“Fortune favours the brave. Extremely happy to know that Cheeta has made a miraculous recovery.

“I thank the team of doctors who have helped Shri Chetan Cheeta in his recovery. Hope to see Cheeta back in action soon,” the minister said.

His deputy in the ministry and Union Minister Kiren Rijiju visited the officer at the AIIMS Trauma Centre and talked to him.

Rijiju said he was “proud” of the officer.

Cheeta, in his short comments, said he felt proud when Army chief General Bipin Rawat and Rijiju visited him during his admission at the hospital and recognised his contribution.

Cheeta had joined the CRPF in Jaunary 1998.

Image: CRPF commandant Chetan Kumar Cheetah with his wife Uma and Doctors after he was discharged from AIIMS Hospital in New Delhi on Wednesday. Photograph: PTI Photo